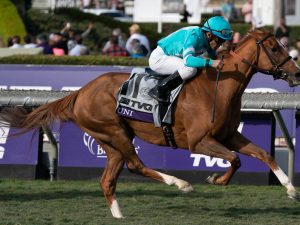 Uni outdueled fellow distaffer Got Stormy un the stretch to a decisive victory in the $2 million Breeders’ Cup Mile (G1) on Saturday at Santa Anita Park.

A 5-year-old mare trained by turfmeister Chad Brown, Uni was content to stay in midpack as Hey Gaman towed the field through an opening quarter-mile in 22.78 seconds with the half going in 45.32, and three-quarters in 1:09.67 over a turf course rated firm.

Straightening for home, Hey Gaman was engulfed by the late closers, with Uni and mild favorite Got Stormy sweeping widest of all to take command at the head of the lane.

The two dueled briefly pulled clear under jockey Joel Rosario and swept under the wire in 1:32.45. 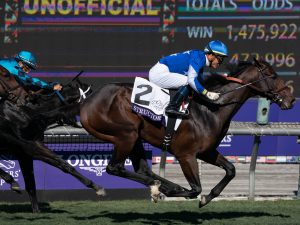 The win was the second for Brown in this Breeders’ Cup.  He won the Juvenile Turf with Structor on Friday. It was Rosario’s second win on the day – he won the Filly & Mare Sprint aboard favorite Covfefe.

“I tell you what, she’s a remarkable little horse.’’ Brown, who also trained third-place finished Without Parole, said. “She’s such a sweet horse, but she’s got a great late kick.”

The victory was the third in four starts this year, who took  the First Lady (G1) at Keeneland last month to convince Brown to enter her in the Mile.