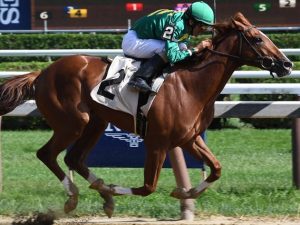 And these are desperate times for horse racing as we approach Breeders’ Cup weekend at beleaguered Santa Anita.

Let’s roll out another cliché while we’re at it … everything old is new again.

The “old” in this case is a possible return of a synthetic surface at Santa Anita. All together now … cue the chorus for another stanza of the artificial track blues.

Sometimes the best solution to a problem is the most drastic one. At this point, digging up the current surface and rolling the carpet back down would be an extreme, but effective, answer to the safety issue.

Not to be excessively ghoulish on Halloween, but there have been 36 equine fatalities at the “Great Race Place” since last winter.

And now the sport’s biggest stars are assembled for the two-day Breeders’ Cup spectacular starting Friday.

No one can doubt that Santa Anita and the Breeders’ Cup are doing everything humanly possible to insure a safe environment for horses and riders.

At a safety and security press briefing Wednesday morning at the track, an esteemed panel of experts outlined the extraordinary measures being taken. An army of veterinarians has descended on Santa Anita to ensure that every Breeders’ Cup runner is thoroughly examined and observed in their stalls, while training, in the paddock and on their jog to the starting gate.

They have also imported experts in track maintenance to comb the main track and the turf course to unearth any flaws or imperfections.

In short, they have covered all the bases. But will be enough to ward off another tragedy?

The sport and its fans will undoubtedly hold their collective breaths until the last horse safely crosses the finish line in the Classic early Saturday evening.

Longer term, the idea of a synthetic comeback is gaining traction.

Dr. Dionne Benson, the chief veterinary officer for the Stronach Group which owns the track, refused to shoot down that concept when raised as a question at Wednesday’s press conference.

“We haven’t ruled anything out,” she said. 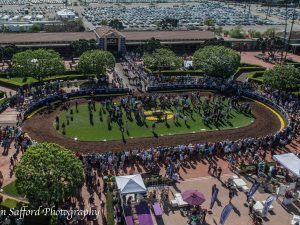 We’ve seen this movie before. In 2007, Santa Anita switched over to a synthetic surface, a move dictated by the California Horse Racing Board for the state’s thoroughbred tracks over concerns about horse safety.

Seemed no one was happy with the edict.

Bettors boycotted, shutting their wallets as handle declined. Trainers were unhappy with the new surface and management said it was too difficult to properly maintain.

The most salient fact was overlooked amidst the chorus of gripes. Fewer horses suffered fatal injuries on the synthetic track.

In 2010, Santa Anita switched back to natural dirt. And that brings us to today and this point of crisis.

The spate of breakdowns has softened opposition to a synthetic rebirth. If it happens this time, it probably won’t need a CHRB edict. Every stakeholder realizes they can’t keep killing horses if they want to preserve racing at Santa Anita.