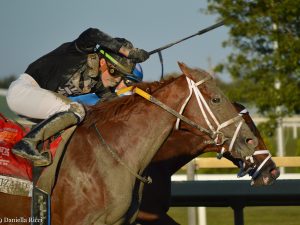 Once again, expect Math Wizard to be a long shot in his next race, the $6 million Breeders’ Cup Classic at Santa Anita Park next Saturday.

Of course, that doesn’t mean he won’t pull off another surprise when he goes against the likes of McKinzie, Code of Honor and Elate in the 1 ¼-mile Classic.

The unlikely score, over the likes of Mr. Money and War of Will, put the 3-year-old chestnut colt into the spotlight, and trainer Saffie Joseph, Jr. could not be more thrilled with this turn of events in his ninth year as a conditioner.

Math Wizard, a son of Algorithms, put in a final breeze at Gulfstream Park on Saturday, working five furlongs in 1:02.32 over a muddy track. The work came a week after a four-furlong, 46.48-second blowout.

“This was more of a stamina-building breeze. He had a good breeze last week,” Joseph said from Gulfstream Park. “He went seven-eighths in 1:28 and a mile in 1:41, so it was solid all the way around. So far so good.”

Math Wizard will race at his eighth track in eight starts, and will be ridden for the first time by Ricardo Santana, Jr. Irad Ortiz, Jr. was aboard Math Wizard for the Pennsylvania Derby, but he chose to ride Vino Rosso in the Classic.

Math Wizard is among 11 horses pre-entered for the Classic; the post-position draw is Monday (3:30 p.m. PT).

Math Wizard comes into the Classic with three wins – maiden, claiming and Grade 1 Pennsylvania Derby – in 13 career starts, with two seconds and three thirds for earnings of $860,623. He did finish fourth in the Wood Memorial (G2), second in the Ohio Derby (G3) and third in the Indiana Derby (G2).