Best In Show(room): ‘Mattress Mack’s’ Runhappy And Chester The Affenpinscher 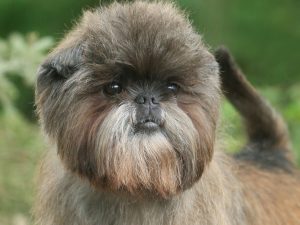 You can’t say Gallery Racing has gone to the dogs. Not with a Breeders’ Cup winning horse, Eclipse champion Runhappy, and a presence that has redefined racing sponsorship and support of the sport.

Going to top dog status is more like what’s going on. A tiny dog owned by Gallery founder Jim “Mattress Mack” McIngvale’s daughter, Laura McIngvale Brown of Austin, Texas, was among seven top dogs judged winners of their groups in November at the National Dog Show in Philadelphia.

While Chester strutted his stuff on the Thanksgiving Day Best in Show competition televised by NBC, commentators made a number of references to the McIngvale family of Houston.

Alas, Chester – his formal name is Tamarin Tattoo – did not win Best in Show. But there’s always another year, another round, and 3-year-old Chester might yet win Best in Show at one of the big ones. The McIngvale family certainly hopes so, after having realized with Runhappy that success is possible if you work hard enough and wait.

“I got my parents into racing,” Laura said. Her parents, in turn, bought Chester for $15,000 as a Christmas present in 2019, to get her to the level in dog shows where she aspired to compete. The venture was somewhat removed from the McIngvale family’s horse racing experiences but no less competitive, the family soon discovered.

“I think he thinks I’m crazy,” Laura said of her father’s view on dog shows, “but I think after watching the National Dog Show on TV he understood the itch for it.”

Chester is an Affenpinscher, a breed frequently described as “little monkey dogs” because these dogs do have a bit of a monkey face. They’re smaller than a Jack Russell terrier. But no less mighty. At dog events, they compete in the toy dog group.

With Chester’s winning the toy dog group at the National Dog Show, Laura feels that patience will pay off in getting to Westminster. After all, it took some 20 years before her parents’ Gallery Racing won the Breeders’ Cup Sprint in 2015 with Runhappy. Waiting nearly a quarter-century for something big for Gallery Stable taught all in the family that winning in a competitive arena does not come quickly or easily.

Winning did not come easily for many years for McIngvale. He came into racing as a newbie who failed to understand how the sport worked. He spent millions of dollars on initial forays into yearling sales and thought the money spent would bring instant results. He was so wrong, as two decades of trying to win a big one taught him.

Underlying McIngvale’s endurance was a love he had developed for racing, a fondness that grew out of numerous nights of watching a documentary about Secretariat when daughter Laura was young. They watched it together, back when VHS tapes were the medium. “We wore the tape down to nothing,” Laura said.

With Runhappy, Gallery Racing began to realize the returns it sought. Runhappy raced in racing’s biggest leagues; meantime, McIngvale had begun giving back to the sport. He had a long history of sponsorship, after supporting stakes at Turfway Park under Gallery’s name.

“He really wants to promote the (racing) sport,” Laura said of her father. In one marketing venture to promote Runhappy, McIngvale came up with the idea to sponsor winners’ lounges at Del Mar and Kentucky Downs. McIngvale supplied the furniture from his Houston stores; the connections of winning horses could relax after their races in these lounges, where Runhappy’s name loomed large.

“The people loved that,” McIngvale told Bill Finley, writing in Thoroughbred Daily News. “When they won, they got to sit on this nice Runhappy sofa and sit on Runhappy bar stools and everything was labeled ‘Runhappy.’ It made it special for the owners. Whether they won a maiden claiming race or a stakes race, they got to go into the Runhappy lounge and go and celebrate their victory. They got to think about Runhappy when they were still in a state of euphoria over winning.”

With his history of promoting racing, it’s a solid bet that McIngvale will turn to sponsorship of dog shows if Chester continues his winning ways. It’s the way of Gallery Racing. People in the dog show world can expect to hear more from Gallery Racing and the McIngvale family of Houston.