Whenever a horse has a chance at the Triple Crown, the world pays attention. Of the 36 who earned that opportunity, only 13 capitalized. The triumphs were unforgettable, and so were many of the failures. Sometimes an agonizing near-miss can be just as riveting.

Here are my 10 most memorable Belmont Stakes, with uniqueness counting as much as performance. Except for No. 1 and No. 2, I expect plenty of disagreement, which adds to the fun.

You may wonder why I left out Seattle Slew and Justified, the only horses to sweep the classics while undefeated. And what about the gutsy gelding Funny Cide? It’s a top 10 list, and I just ran out of room.

Big Red stepped into another dimension with a 31-length runaway in 2:24, otherworldly records that will last forever. The first Triple Crown champion since Citation in 1948 inspired Daily Racing Form columnist Charles Hatton to write “His only point of reference is himself.”

Secretariat’s chronicler, the late, great Bill Nack, was deeply invested emotionally in the magnificent chestnut, whom he called “a chivalrous prince of a colt who was playful and mischievous.”

You would assume that the 1973 Belmont was a stress-free peak experience for Nack, but you would be wrong. Even as Secretariat surged well clear down the backstretch, Nack got the fear when he saw the fractions: 6 furlongs in 1:09 4/5, a mile in 1:34 1/5. No, no, way too fast!

“The instant I saw those splits, I figured right there that all was lost,” Nack wrote for espn.com in 2014. “Figured that he’d be consumed by the fires of his own sizzling pace.”

Worry is interest paid on trouble before it is due, and Nack need not have fretted.

The rivals. Forty-two years later, you still can’t think of one without the other. Affirmed led all the way under 18-year-old Steve Cauthen and held off Alydar and Jorge Velasquez by a head in one of the most thrilling stretch drives ever. It was the closest Belmont for any of the Triple Crown winners.

Alydar’s fans still will tell you he had more talent. The difference was Affirmed’s toughness. He just wouldn’t let his pursuer go by him that spring.

“Two great horses came along in the same year,” Cauthen said. “It was great for racing. It was a Joe Frazier-Ali fight every time. I’ve never had a more exhilarating experience all around than that Belmont.”

For the next 37 years, if a horse took the Derby and the Preakness, Cauthen would recount Affirmed’s Belmont in dozens of interviews. American Pharoah finally ended that pleasant ordeal.

Starting with Spectacular Bid in 1979, whenever a Triple Crown was on the line, something bad always happened. Then along came a smooth-moving colt who helped trainer Bob Baffert, jockey Victor Espinoza and the sport finally get over a hump that had loomed as big as Mount Everest.

Baffert had come up short three times, and Espinoza had missed out twice, once with Baffert (2002, War Emblem). This time there were no anxious moments as Pharoah went wire to wire.

“I was prepared for somebody coming because I’ve been through this so many times, and I was just hoping that for once …’’ Baffert said. “I could tell by the eighth pole that it was going to happen, and all I did was take in the crowd.

“It was a beautiful moment. I’ll never forget that sound.”

Easy Goer, the regally bred chestnut from New York, and Sunday Silence, the dark upstart from California, staged the best rivalry since Affirmed-Alydar. Sunday Silence won three of four – Derby, Preakness, Breeders’ Cup Classic – but Easy Goer canceled his bid for immortality with an eight-length romp on his home track.

Most handicappers and journalists predicted the Triple Crown was 2-year-old champion Easy Goer’s to lose. His Achilles’ heel, a wet track, tripped him up on Derby Day, and a questionable ride by Pat Day contributed to losing by a nose at Pimlico. Trainer Shug McGaughey and Easy Goer’s fans would get even on Belmont day.

Sunday Silence’s agility was blunted by the broad, sweeping turns at Belmont, which suited his huge, long-striding archrival. The finale was no contest, and race caller Marshall Cassidy played to the crowd by trumpeting “It’s New York’s Eeeezzzz-eee Goer, in front!”

It was consolation for McGaughey, but the nagging “what might have been” lingered.

“I think the only time Easy Goer ran his best race against Sunday Silence was in the Belmont,” he said after his superstar’s retirement in July 1990. “It’s just too bad that he never showed his best at the right time.” 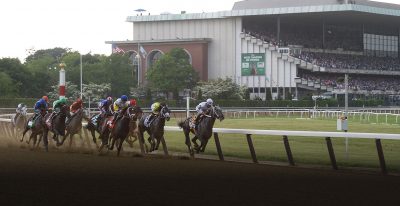 Philadelphia fell in love with this four-legged, working-class hero, one of the best horses never to win the Triple Crown. His near-miss in the Belmont infuriated the 15,000 or so Philly fans who had driven up the New Jersey Turnpike. They thought it hadn’t been a fair fight, and they were right.

Purge, Eddington and Rock Hard Ten ran relays at their beloved Smarty, who still held them all off and led by daylight into the stretch. He was spent, though, and 36-1 shot Birdstone passed him 70 yards from the finish.

I compare it to a bar fight in which three guys jump somebody and get in good shots until he knocks them all out. Then somebody sneaks up from behind, brains him with a pool cue and ends up the last man standing.

For owner-breeder Marylou Whitney, it was the agony of victory.

“This means so much to me. This was a homebred,” Whitney said while fighting back tears. “But we do feel horrible. It’s bittersweet. We were rooting for Smarty. We love Smarty.”

No filly had won the Belmont since Tanya in 1905, and since then only nine had even tried. Todd Pletcher was 0-for-6 in the big race in his backyard, and he also was winless in the Derby and Preakness.

After Rags to Riches won four in a row, capped by a 4¼-length romp in the Kentucky Oaks, Pletcher decided to run her in the Belmont off five weeks’ rest. She was big, strong and had an ideal pedigree for the race. Her sire, A.P. Indy, won it in 1992, and her dam, Better Than Honour, had produced the 2006 winner, Jazil.

The 8-5 favorite was Preakness hero Curlin, a huge chestnut colt who would be Horse of the Year in 2007 and 2008. Rags to Riches, under John Velazquez, stumbled out of the gate, losing about five lengths, and was wide in fifth behind plodding fractions (:50, 1:15 1/5). She swept into the stretch four wide and engaged Curlin, who couldn’t get by the Amazon princess. The margin was a head.

Pletcher, who rarely shows emotion, punched the air again and again. Nine years later, he said, “I still consider it our sweetest victory. It was a mile-and-a-half roller-coaster ride, for sure.”

In six days the “Con-kwistador,” as trainer Woody Stephens called him, accomplished more than most horses do in a career.

On Memorial Day, he beat older horses in a stakes-record 1:33 in the prestigious Met Mile. Stephens liked to “run them when they’re good,” so he brought back Conquistador Cielo five days later in the Belmont.

Many doubted that a son of sprint influence Mr. Prospector could stay 1½ miles, but Stephens always said the Belmont favored speed. Laffit Pincay Jr. immediately gunned Conquistador Cielo toward the lead from the far outside, and they splashed clear of Derby winner Gato Del Sol by 14 lengths.

No one enjoyed gloating more than crusty old Woody.

“As easy as taking a walk in the country,” he said of his first of five consecutive Belmont victories.

It had been 20 years since Affirmed became the 11th member of racing’s most exclusive club, and in mid-stretch it looked as if the drought would end.

Real Quiet led by four lengths at the eighth pole but began to tire, and Victory Gallop was coming hard. Once again it was nervous time for Bob Baffert, whose Triple Crown bid the year before with Silver Charm had been denied by closer Touch Gold in deep stretch.

As Victory Gallop ranged up alongside in the final strides, Kent Desormeaux moved Real Quiet out to hinder him. They hit the wire together, and you couldn’t tell who got there first. As race caller Tom Durkin cried, “Too close to call. History in the waiting.”

The photo gave it to Victory Gallop by inches. As racing analyst Richard Migliore said 20 years later: “Real Quiet did everything but win.”

The stewards issued a statement saying that even if he had held on, Real Quiet would have been disqualified for interference. Few believed that story. 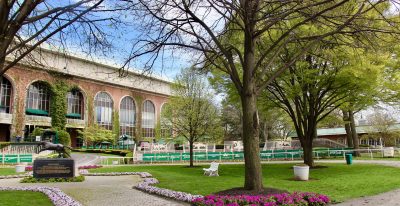 Big Brown was unchallenged in the Derby and Preakness, and trainer Rick Dutrow called the Belmont “a foregone conclusion.” It was everything but.

On a humid, 96-degree day, the undefeated colt had a meltdown for the ages. Not only did the 3-10 favorite never look like he would win, he didn’t even finish the race. In the wackiest Triple Crown finale ever, a one-hit wonder named Da’ Tara led all the way and paid $79.

What happened? We’ll never know. An exam found no injury, so for weeks explanations kept popping up. Among them: the heat; the deep, sandy track; a loose shoe; a bad ride by Desormeaux; being taken off Winstrol, a legal steroid.

Four years later, co-owner Michael Iavarone reflected on the only failure by his horse of a lifetime.

“It was a whirlwind,” he said. “It’s an amazing feat to get there, but if you lose, you’re disappointed. Looking back, it’s really unreal.”

Co-owner Steve Coburn said he’d dreamed that California Chrome would win the Derby on his birthday. He did, then took the Preakness. The cult of “Chromies” felt sure their California-bred hero would win the Belmont. He faded to fourth behind Tonalist, who skipped the first two classics.

Seconds later on NBC, Coburn snapped. “These other horses who sit out races then come to upset the applecart. This is the coward’s way out,” he ranted as his agitated wife, Carolyn, poked him in the back while saying, “Stop it, Steve.”

Coburn defiantly doubled down the next morning on national TV. “It’s the truth. I don’t regret a damn thing I said.” A day later, he made a tearful apology on ABC’s “Good Morning, America.”

“This is America’s horse,” Coburn said, “and I wanted him to win the Triple Crown for the people of America. I was very emotional.”