For the first time, this year’s Los Alamitos Derby (G3) will take a prominent position as a Kentucky Derby (G1) prep race. Due to the COVID-19 pandemic, plus the four-month delay of the Run for the Roses, Saturday’s Los Al will now – maybe for the first and only time — offer coveted Road to the Derby points on a 20-8-4-2 scale to the top four finishers.

The nine-furlong test, formerly known as the Swaps Stakes and contested at the now defunct Hollywood Park through 2013, drew a field of five, with two — Thousand Words and Anneau d’Or — already in the Top 20 leaderboard for the Sept. 5 Derby. 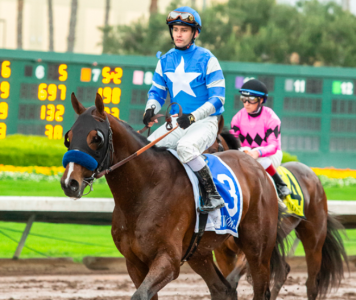 And has become the norm, racing at Los Alamitos is being conducted spectator-free, and all participants will be wearing masks and safely socially distance as much as possible.

When the Los Al Derby was known as the Swaps — named for the 1955 Kentucky Derby winner — the race consistently drew top sophomores, some who had success along the Triple Crown trail, and some who established themselves with a Swaps win and in their performances beyond.

J.O. Tobin beat Triple Crown winner Seattle Slew in the 1977 Swaps in the race’s fourth edition and he was followed into the record books by Precisionist, Best Pal, Bien Bien, Thunder Gulch, Free House, Cat Thief, Congaree, Came Home and Rock Hard Ten at Hollywood Park. Shared Belief won the first running at Los Alamitos in 2014 and was followed by top runners like Accelerate, West Coast and champion Game Winner a year ago.

Free House holds the stakes record for the distance at Hollywood Park when he finished in 1:45.80 in 1997, and Shared Belief clocked 1:47.01 in 2014 to hold the title for the fastest race held at Los Alamitos.

The last time Thousand Words and Anneau d’Or met up was in last year’s Los Alamitos Futurity (G2), where the former took the win by a neck over the latter. Neither has had much success since, but their connections hope these talented and expensive colts will turn things around in here.

Thousand Words, who is trained by Baffert, makes his first start in two months and his first since a disappointing 11th-place finish in the Oaklawn Stakes at Oaklawn Park.

To be fair, he had a terrible break and never got into his preferred position of stalking the pace and was never a factor. Baffert takes the blinkers off this $1 million son of Pioneerof the Nile, who is owned by Albaugh Family Stables and Spendthrift Farm, and sends him in search of points to add to his current total of 25, which puts him 17th on the leaderboard.

Regular rider Flavien Prat, who didn’t make the trip to Arkansas, will be back aboard in search of his second Los Alamitos Derby win to go with the one he earned aboard Once On Whiskey two years ago. The colt has been training great at Santa Anita and has run well off a similar brief layoff before. 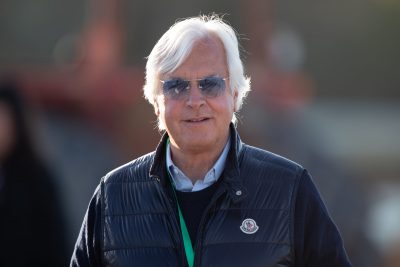 Baffert will also send out Pegram, Watson and Weitman’s Uncle Chuck in his first start against winners after breaking his maiden by a widening seven lengths three weeks ago. This is good spot for his stakes debut and with half of Baffert’s “A” team headed to the sidelines with injury or needing time off, this one has the potential to rise to the top of his trainer’s Derby hopefuls.

He is a son of top sire Uncle Mo and the grade 2-winning Unbridled’s Song mare Forest Music and, therefore, a half-brother to young stallion McLean’s Music and Grade 3 winners Kentuckian and Electric Forest. There’s no doubt he’ll be gunning for the front from the break under Luis Saez and if he can carry his speed an extra furlong, off the maiden score he’ll be dangerous for the win.

Anneau d’Or was a member of that puzzling Breeders’ Cup Juvenile (G1) where only one of the eight runners have managed to win a race since. Anneau d’Or was second behind eventual champion Storm The Court, who himself has only managed a pair of thirds in four starts, while this $480,000 son of Medaglia d’Oro has failed to hit the board in three starts since, all stakes. We know this colt is talented, but how talented remains the question.

Great Power broke his maiden at first asking back in September of last year for trainer Simon Callaghan, but came back to finish a flat third in his only start of 2020 in a first-level allowance race in mid-March. He’s been training great, but his overall figures indicate he’ll need a lot of improvement to upset here.

Hall of Famer Neil Drysdale trains Cosmo, who is still a maiden after five starts, in his main track debut. He seems overmatched.

The field, from the rail out, with trainer, jockey, odds