A Bite Of Arkansas Derby History

Before the varmints took over, the Arkansas Derby ruled the social scene tangential to the Oaklawn Park race meet. All this changed sometime during the 1960s when one man who was rumored to own 75 pairs of cowboy boots [custom-made] and 60 cowboy hats upended society’s calendar.

For it was during this decade that witnessed the rise of Bob Dylan, ubiquitous weed, women jockeys and free-thinker Betty Frieden setting off a social revolution that horse trainer Doug Davis, Jr. likewise snubbed the establishment. He inaugurated an annual Varmint Dinner in Hot Springs, Ark., and society was never, thereafter, the same. 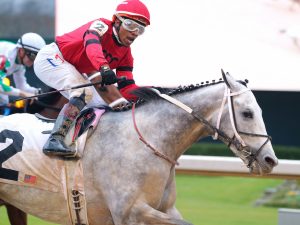 The menu, as you can imagine, perfectly suited this eponymous event. Invitees to the first dinner dined on dead things shot with guns: swamp rabbit, quail, wild duck, venison, wild geese, and whatever else Davis threw into the pot. You had to have a taste for red meat of this gamey sort but then, most of the invitees lived to dine on varmints. They were good ol’ boys.

The swamp rabbit assumed a place of high importance on that inaugural menu. Davis considered this wild bunny a delight worthy of only the highest epicurean sensibilities.

“A swamp rabbit is about the same thing as a Cottontail, you know,” he said in a drawl as deep as his cowboy hats were high. “He’s the same as a Cottontail,” he went on, “except he’s much bigger and will go to water and swim like a duck if you get to crowding him.”

With whiskey running like a raging river through Hot Springs during the race meet, the sight of a rabbit swimming like a duck might have seemed the natural course of events proportionate to the ratio of alcohol imbibed. Of course, rabbits swam.

Anyway. The first dinner went off as a stag affair, typical of fun-filled occasions during those unenlightened times. The whiff of smoking varmints on the wind soon reached the ladies, however. This resulted in women demanding invitations to succeeding Varmint Dinners. They were all reading Betty Friedan, after all.

Davis and his pals, who included the infamous horse doctor Alex Harthill, both of them residents of Kentucky, would have choked at the very idea of admitting women to any event where rabbits could swim. But the women persisted. In the end, Davis met them half-way. He informed the ladies they would be welcome next time around but only as a Varmint Dinner Ladies’ Auxiliary segregated to their own separate room.

Davis had a lot to learn. The women spurned his offer. They persisted in getting their way and soon they gained entrance to the main hall where the swamp rabbits swam, the whiskey flowed, and speculation likewise flowed on who would win the Arkansas Derby.

The Varmint Dinner had begun as a small gathering of Davis’ pals, but it grew so large, with some 250 invitees, that Davis had to move the event to a hotel ballroom. Later renewals of the dinner saw the menu expand to include elk, buffalo, and caribou. Davis’ death at age 58 in 1976 left a huge piece missing from the Hot Springs calendar, as the annual Varmint Dinner was discontinued.

Davis was polar opposite to modern-day trainers, who operate more like traditional businessmen. Davis knew how to train a horse – he won the Travers Stakes with Annihilate ‘Em – but he would not have garnered a lot of clients in this modern age. Horse owners have come to expect a different breed of horse trainer and the folksy, free-wheeling days are gone.

When Davis ruled the Kentucky-Arkansas-Chicago circuit he defied convention and rules to suit himself. Lost in Keeneland lore is the tale of trainer Jim Cowden claiming a horse from Davis. Cowdin walked up to halter his newly acquired horse to find Davis removing the animal’s shoes. Cowdin reported Davis to the track stewards. Davis explained that the shoes were orthopedic footwear he personally designed, and he did not intend to share his secret design with a rival stable. Stewards ordered Davis to hand over the shoes but by this point, the shoes had gone missing. Of course they had.

Another time, Davis purchased a horse named Colors from Calumet Farm. The horse had a reputation for refusing to load into the starting gate. This did not deter Davis, for Colors was a son of Whirlaway to be had at a good price.

Davis commenced a re-training program for Colors. He outfitted the stubborn horse in a harness. A tractor, hooked to the harness, pulled Colors into the starting gate. Once inside the gate, Davis fitted the horse with additional straps to prevent Colors from flipping or lying down. He left the horse in the gate all alone each day, but he did provide Colors with hay, feed, and water. He hoped to teach Colors a lesson.

Unfortunately for Davis, Colors was smarter than he was. Colors learned to break from the gate. Davis thought he’d won this battle. But Colors refused to run upon leaving the gate. As much as he knew about a horse, Davis did not always come out a winner and Colors proved that.

Davis began his working years in his home state of Texas, selling used cars and insurance. He went to Kentucky to assume management of High Hope Farm for his father when that man became ill. Racing’s loss after Davis Jr. passed in 1976 was immense, for he had accomplished much more than training a Travers winner and inaugurating the Varmint Dinner.

He began a practice of opening his farm to an annual charity event, the High Hope Steeplechase, an event that raised considerable amounts of money for worthy causes.  The steeplechase continues at the Kentucky Horse Park, with its name, High Hope, a reference to this colorful character who ate varmints, won the Travers, and opened his farm to the public for a good cause.