Use Saratoga Trends to Win at the Belmont Fall Meet

New York racing once again is ready to move downstate for the start of the Belmont Park Fall Championship Meet, which begins on Friday, Sept. 7, and continues to Sunday, Oct. 28. With 44 stakes races worth over $10 million in purses, there are few race meets on the calendar as important as the Belmont Fall Championship Meet, which contains all of New York’s key prep races for the Breeders’ Cup. Belmont Park also offers top-notch racing day in and day out throughout the early fall season.

For the average horseplayer, Belmont can be a better meet than Saratoga because it is easier to nail down winners at Belmont, thanks to a smaller, more concentrated sample of horses and horsemen that are easier to keep tabs on. Field sizes at Belmont can be expected to be somewhat smaller than they were at Saratoga, especially on the dirt, but Belmont still will have plenty to offer horseplayers, including the best 2-year-olds, the best turf racing of the season and the best and most widely-inclusive stakes program of the fall season.

The Belmont Fall Meet shares even more similarities with the Saratoga meet than it does with the Belmont Spring/Summer Meet. This is because the 2-year-old program is such a big part of racing during the fall at Belmont Park, but virtually non-existent at Belmont in the spring. Not only is there juvenile racing at Belmont in the fall, but the track’s 2-year-old racing program happens to be the best juvenile racing in the country at this time of year.

Use Handicapping Trends From Saratoga for Winning Tips at Belmont

Most of the horses running at the Belmont Fall Championship Meet will be exiting starts at Saratoga. When evaluating horses’ form from Saratoga when they show up back at Belmont Park in the fall, one set of trends to learn from are the post position and running style trends that affected the recent Saratoga meet. Many horses racing at Belmont will show up with past performances that look either better, or worse, than they really are based on their favorable or non-favorable trips and posts from recent starts up at Saratoga.

Here is my personal list of main track biases that had an effect on the recently-concluded Saratoga meet:

In turf routes run at Saratoga this year, post positions were remarkably fair on the inner turf. The Mellon (outer) turf course, however, was a completely different story.

For horses exiting Saratoga Mellon turf routes, keep in mind that the outside posts were a disaster this season and you needed to draw posts 1-6 in order to have a decent chance to win.

Horses breaking outside post 6 on the Mellon turf at Saratoga went a combined 2-for-75 (2.6 percent) and not one horse won from those posts the final three weeks of the meet.

Therefore, upgrade those outside-drawn Saratoga turf routers from the Mellon course when you see them in their next starts at Belmont. 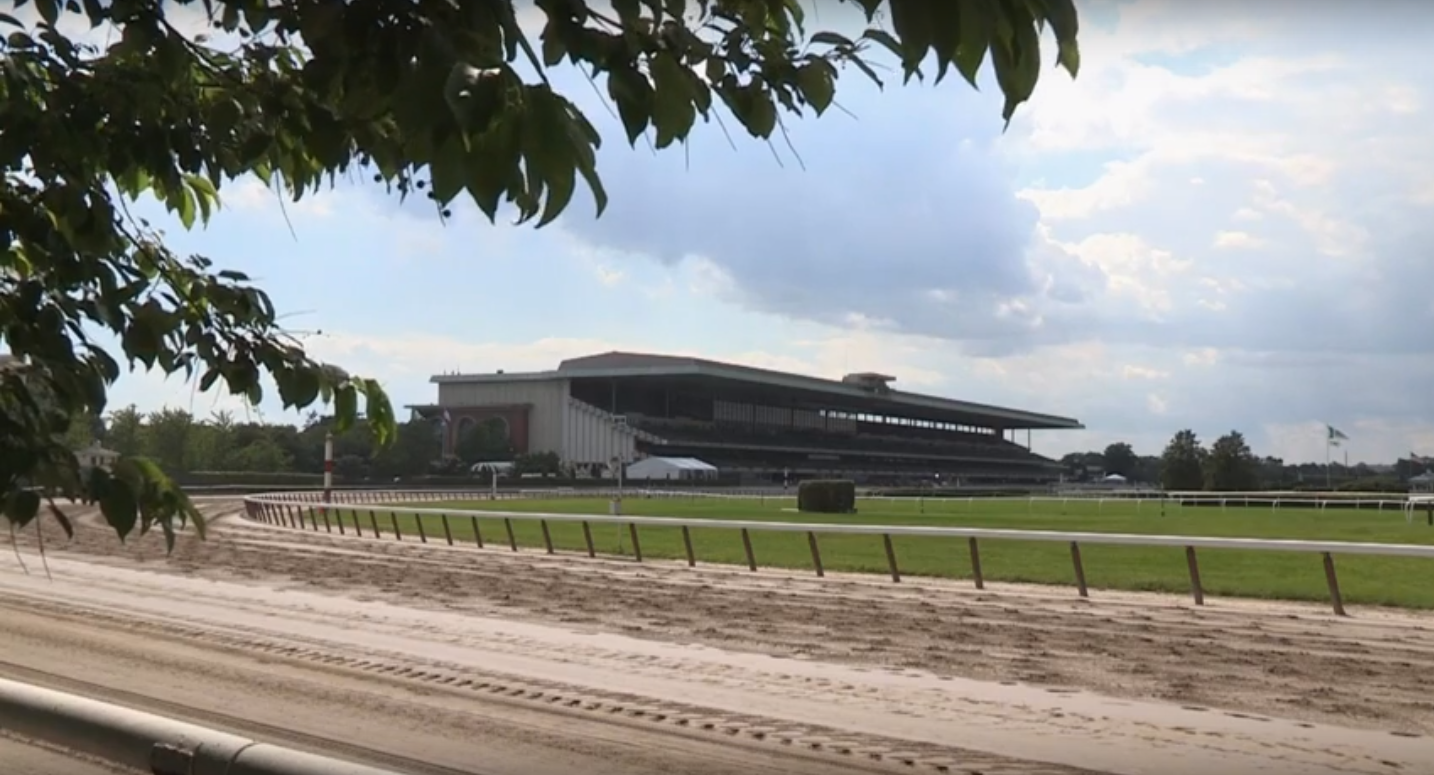 There is also a Belmont handicapping angle for horses exiting inner turf course races at Saratoga. It doesn’t involve post positions, but rather, running style. The inner turf course carries speed under firm conditions. These horses are going to come back in droves at Belmont and provide a strong betting angle this fall. When you see horses at Belmont (or Churchill or Keeneland, for that matter) who won or ran big with front-running efforts on Saratoga’s inner turf, you can downgrade those horses in their next starts. Conversely, when you see a horse exiting a Saratoga loss or sub-par effort(s) at Saratoga with a late-closing running style, you can go ahead and upgrade those horses at Belmont because they had less of a chance with that kind of running style on the inner turf at Saratoga. Remember this angle is for horses exiting Saratoga inner turf races (on “firm” turf only).

Trainer, Jockey and Post Trends From Saratoga to Use at Belmont

The discussion of handicapping the Belmont fall meet must include a look at the human trends from the Saratoga meet directly preceding it.

Many jockeys and trainers enjoyed success during the course of the Saratoga meet, but obviously trainer Chad Brown was in a class all by himself at The Spa in 2018. Brown set a Saratoga record with 46 victories, shattering the previous record of 40 which he first set in 2016 and which Todd Pletcher tied in 2017. Brown posted six graded stakes wins during the Saratoga meet, with earnings totaling more than $4.4 million, encompassing wins in the Test (G1), Diana (G1), Ballston Spa (G2), Lake Placid (G2), the National Museum of Racing Hall of Fame (G2), and the Saranac (G3). He also found time to take a detour to Arlington to win both the Arlington Million (G1) and the Beverly D. (G1).

Brown had more than double the wins than his next-closest competitor, Todd Pletcher, who had a dramatically sub-par season by his standards with only 19 wins. With fewer wins at Saratoga, however, Pletcher is likely to be loaded for Belmont.

Irad Ortiz and Jose Ortiz continued their reign atop the jockeys’ standings for yet another New York meet. Irad won the Saratoga riding title with 52 victories, ending the two-year reign of brother Jose at Saratoga, who finished in third-place this season with 42 wins. Jose won last year’s Spa meet with 58 victories, so this season was actually a down year for him.

Javier Castellano enjoyed a resurgent meet with 43 wins and actually managed to split the Irad-Jose exacta by finishing second in terms of wins.

While Todd Pletcher and Chad Brown will win the most races at Belmont, keep in mind that their average win prices will be in the $6-$7 range, so handicappers will need to find opportunities beyond that pair in order to make any real money.

Some other hot trainers from Saratoga, and/or at last year’s Belmont Fall Meet that you might want to consider betting this season at Belmont include Kiaran McLaughlin, Bill Mott, Christophe Clement and Jason Servis.

Kiaran McLaughlin quietly had a giant Saratoga meet, going 11-for-38 in the win column for 29 percent wins and an average win payoff of $10.20. McLaughlin’s runners were only 1-for-9 on turf, but posted an impressive 10-for-29 (34 percent) record in dirt races.

Bill Mott tied for fourth in the Saratoga standings with 13 wins, but won at only 14 percent from 90 starters, so he has plenty of conditions still remaining at Belmont. Mott finished third at Belmont Fall in 2017 with 14 winners and should at least equal that tally this season.

Christophe Clement didn’t make an impact at Saratoga this season, but he’s always better at Belmont Fall. In 2017, Clement was the fourth-leading trainer with 13 wins at the Belmont Fall Meet for 19 percent wins and 59 percent ITM.

Steve Asmussen, who was red-hot early in the Saratoga meet, cooled down considerably the last four weeks. He finished with 13 wins but nevertheless is ice cold and won only six races at last season’s Belmont Fall Meet.

In the Belmont jock’s room, most of the top mounts from the top barns will continue to go to Jose Ortiz, Irad Ortiz, John Velazquez, and Javier Castellano. Winners ridden by Velazquez and Castellano, predictably, have the lowest average win payoffs of all regular riders. This is understandable because these four riders get most of the plumb mounts from top barns like Brown, Pletcher, Rudy Rodriguez and others.

What handicappers really need to know is who to bet other than Jose, Irad, Castellano and Velazquez in terms of the Belmont jockey colony. Here are a couple suggestions:

The best bet jockey in New York right now is Joel Rosario, who exits a 29-for-165 season at Saratoga with an average win payoff of $14.70, which was highest amongst the top 10 riders at the meet. It also should be noted that the Belmont Fall Meet was Rosario’s best meet of the last year. Plus, he finished third in the standings here last year with 33 winners.

Luis Saez also is a great bet on the New York circuit, because you get quality rides from him consistently, but without a name that drags down your odds on the tote board. He’ll ride for some top barns, including Kiaran McLaughlin, yet his average winner at Saratoga still paid $10.10. He finished sixth at the 2017 Belmont Fall Meet with 25 wins.

These six riders — Irad Ortiz, Jose Ortiz, Castellano, Velazquez, Rosario, and Saez — should be relied upon to finish 1-6 in the jockey standings at the Belmont meet and should win about a third of the overall races at the meet.

I hope these tips and trends give you an edge at the betting windows for a successful and enjoyable 2018 Belmont Fall Championship meet. Best of luck!