The $350,000 Hopeful Stakes (GI) and the $300,000 Del Mar Futurity (GI) mark the end of the spectacular summer racing meetings at both Saratoga and Del Mar, respectively. And, this year, both of these Labor Day features have drawn strong fields of juveniles, all whose connections no doubt have at least one turned toward the first Saturday in May in 2019. 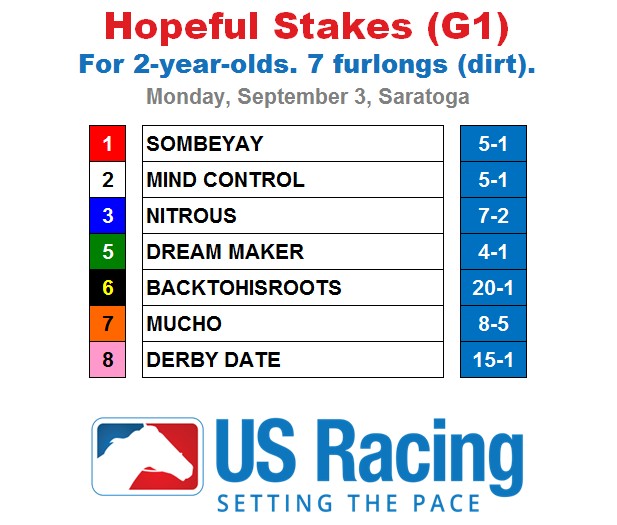 The Hopeful, which drew a field of eight this year, started out as one of the more prominent races for juveniles on the East Coast when first run in 1903 and since the filly Tanya won in 1904 (she would later become one of only three fillies to win the Belmont Stakes), an encyclopedia of spectacular names has graced the winners’ list, including Peter Pan and Kentucky Derby-winning filly Regret, Man o’War, Morvich, Bimlech, Whirlaway (Triple Crown winer), Native Dancer, Nashua, Needles, Hail to Reason, Jaipur, Buckpasser, Secretariat (Triple Crown winner), Foolish Pleasure, Affirmed (Triple Crown winner), Chief’s Crown, Gulch, Summer Squall, Favorite Trick, Afleet Alex and many more.

A year ago, Hall of Famer D. Wayne Lukas saddled his record eighth winner with Sporting Chance and is back looking for a ninth this year with Calumet Farm’s maiden Derby Date.

The weather in Saratoga on Monday is expected to be much warmer and more humid than it has been over the previous couple of days, but there’s only a slight chance for rain. Highs will reach near 90 under mostly sunny skies.

Trainer Bill Mott sends out Adele Dilschneider and Claiborne Farm’s homebred Mucho in his first start against winners after breaking his maiden by 9 ¾ lengths here a month ago. The son of Blame and the Pulpit mare Extent (who is also related to Blame through her great granddam Bound, a half-sister to Nureyev, Number and Fairy Bridge, the dam of Sadler’s Wells) broke his maiden in nearly gate-to-wire fashion but also showed some tactical turn of foot in his debut. He earned a big figure when winning, has Jose Ortiz up and seems a solid selection to be favorite.

Winchell Thoroughbreds and Stonestreet Stables’ Nitrous is in against winners after breaking his maiden last out. The gray son of Tapit improved from his second-place debut and should he improve much more, is a legit candidate for the win. He’ll probably be part of the early pace, but jockey Ricardo Santana will no doubt decide where the best early place for him will be.

Sombeyay is coming off a nice win in the Sanford Stakes (GIII) after a nice stalking trip under Javier Castellano, who is back aboard today for trainer Todd Pletcher. He’ll like a quick pace, but he’ll need to up his game a bit to beat the top choices.

Hall of Famer John Velazquez picks up the mount on recent Monmouth Park maiden winner Mind Control. This is a big jump in class for the Greg Sacco trainee and he’ll surely be part of the early pace scenario, but seems to be in a bit tough here.

Dream Maker makes his second start and his first in three months since breaking his maiden at Churchill Downs. His numbers in that race are average, but he does sport some top-notch connections in owner John Oxley, trainer Mark Casse and jockey Julien Leparoux. The Tapit colt has been training well and will adore the pace in front of him, as well as the stretch out in distance.

Backtohisroots was claimed last out in his maiden score and even though he’s been working well, it’s hard to imagine he’ll improve enough to be much of a threat here.

Thatwouldbegrand broke his maiden for $40,000 at Laurel and this seems like an awfully ambitious jump in class. Derby Date is the lone maiden in the field. 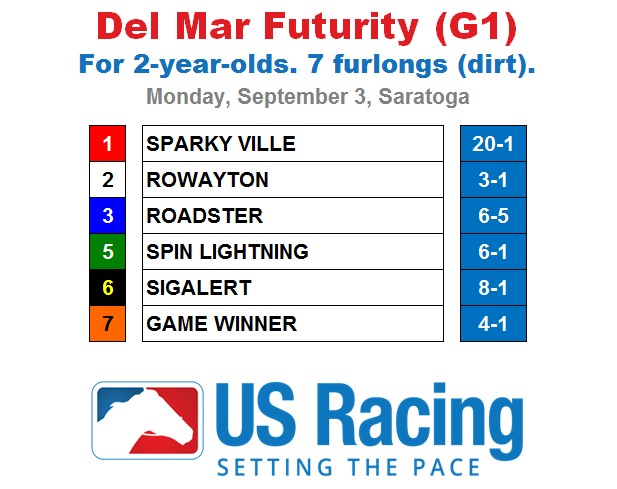 The very first Del Mar Futurity was contested in 1948 and, while it took a while for the race to grow roots as the Southern California 2-year-old event it is, a decade after its inception Tomy Lee took home top honors before capturing the Run for the Roses the following year. Since then, some of the best runners to have ever dug their feet into the Del Mar dirt (and many other tracks globally) have earned the win in the Futurity, including Gato Del Sol, Roving Boy, Althea, Best Pal, Bertrando, Silver Charm, Declan’s Moon, Stevie Wonderboy, Lookin at Lucky, American Pharoah (Triple Crown winner), Nyquist and Bolt d’Oro a year ago.

Hall of Fame trainer Bob Baffert has sent out the winner of this race an incredible 13 times, including a straight run from 1996 through 2002, and this year sends out the favorite in Roadster, as well as Game Winner, both coming off debut victories.

With the surprise non-entry of Best Pal Stakes (GII) winner Instagrand, Roadster has easily taken up the role as the one to beat. This colt was hyped as possibly Baffert’s next star by the conditioner himself after the retirement of Triple Crown winner Justify and, in his debut, he did not disappoint. Under Mike Smith, the $525,000 son of Quality Road sat off the pace and ran away from his competition down the lane in one of the most professional performances from a juvenile this year. He will get a good pace to stalk, has a big speed figure heading into the race and is training exceptionally well.

Game Winner is the “other” Baffert off a winning debut and the talented Gary and Mary West-owned son of Candy Ride has been nothing short of awesome in every gallop and breeze in the mornings. He will certainly be part of the early pace and is certainly bred to like the stretchout, and his only main competition for the win under Tiago Pereira may be his favored stablemate.

Rowayton replaces stablemate Instagrand in this spot for Jerry Hollendorfer off his maiden victory six weeks ago. The son of Into Mischief keeps hot jockey Drayden Van Dyke and has a lot going for him heading into his stakes debut, including some nice workouts. He has room to improve and will need to, but if he gets away with a moderate pace he could be dangerous.

Savagery won by 11 lengths in breaking his maiden by $62,500, but he seems a bit below the top here to be considered for the win, but he is improving for the high percentage trainer Peter Miller.

Sparkyville was a well-beaten second in the Best Pal, but if he runs the same race under Hall of Famer jockey Gary Stevens he figures for a larger share here.

The Jeff Mullins-trained Spin Lightning looked super breaking his maiden three weeks ago and returns with a nice five-furlong work and jockey Flavien Prat back aboard. He’ll get a quick early pace he’ll love and if he improves, figures for a larger share here.

Sigalert is also coming off a winning debut for the red-hot stakes winners Hronis Racing and John Sadler. Overall that effort looked a bit below the top here, but it’s never a good idea to dismiss these connections.

The Del Mar Futurity is the ninth race Monday and will leave the gate at 6:05 p.m. PT.