Surprising Results at the Belmont Stakes, Even Without Triple Try 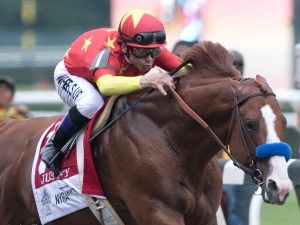 A year ago at this time, Justify was on his way to becoming the 13th Triple Crown winner by rolling to victory in the $1.5 million Belmont Stakes (G1).

On Saturday, not only won’t there be a Triple Crown on the line, the Kentucky Derby winner won’t even be around, nor will the horse that finished first in the Derby but was disqualified for interference.

Nonetheless, the grueling 1 ½ mile lap around cavernous Belmont Park for the final leg of the Triple Crown has produced its share of eye-opening results: a filly winning for the first time in more than a century in 2007; a 24-1 long shot upsetting both the Derby and Preakness winners in 2011; and the first – and still only – female jockey winning a Triple Crown race (1993).

Sure, there’s all the drama you can ask for when a Triple Crown is at stake. That’s occurred 33 times (13 succeeded) in the first 150 editions.

While Preakness winner War of Will and Tacitus (elevated from fourth to third in the Derby after first-place finisher Maximum Security was DQ’d and Country House was declared the winner) vie for favoritism in Saturday’s Belmont, let’s not be surprised if, say, 11th-place Wood Memorial (G2) finisher Joevia (30-1) pulls off a stunner. Or Japan-bred Master Fencer, who seems to be a much longer shot than his 8-1 morning-line odds. Or what if maiden winner Everfast (12-1) one ups his second-place finish in the Preakness at odds of 29-1?

Here’s a look at a bunch of memorable Belmont moments over the past 25 years when a Triple Crown was not up for grabs.

It’s the filly! Other than a Triple Crown success, there’s likely been no race that created as much excitement as this edition of the “Test of the Champion.”

The buzz all week was not whether the filly Rags to Riches could win,  but whether she even belongs in a field that included Preakness winner Curlin and Kentucky Derby runner-up Hard Spun? Trainer Todd Pletcher made the call to enter – Derby winner Street Sense wasn’t running, and the filly’s pedigree (Belmont winners A.P. Indy, Seattle Slew) were factors in the decision — and the race was on.

In a breathtaking stretch run, Rags to Riches (with John Velazquez aboard) outdueled Curlin (ridden by Robby Albarado) to the finish line and won by a head. It was the first time in more than a century that a filly had won the Belmont (Tanya won in 1905).

To this day, Pletcher calls the win his most memorable.

“Without a doubt,’’ he said a few days ago as he prepared his two long shots, Intrepid Heart and Spinoff, for Saturday’s Belmont. “When she was able to win, as exciting as it was at that time to win a first Triple Crown race, it was really exciting winning with a filly.”

It ended frustrating streaks for both Pletcher and Velazquez – the trainer was 0-for-28, the jockey 0-for-20 in Triple Crown races. 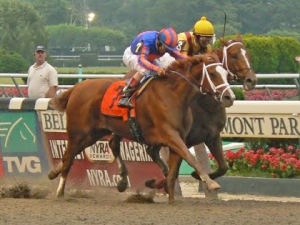 “Looking at it historically, and seeing what Curlin went on to do after that it was a tremendous performance by her,’’ said Pletcher. “Still today, people talk to me about it. No race that I’ve ever run in have more people seemed to take note in than that one.”

Among the rare sights as Rags to Riches and Curlin went head to head was the usually reserved Pletcher screaming throughout the stretch. Fans were on their feet, cheering them on during the long stretch run.

Rags to Riches won the Kentucky Oaks the day before the Derby, and started the Belmont with a stumble out of the gate. However, by the time the field turned for home, four horses fought for the lead. Rags to Riches was on the outside; Curlin was moving between rivals.

And just like that, it became a true battle of the sexes, with Velazquez urging on his filly and she hung on for the win.

After the race, Curlin’s trainer Steve Asmussen said, “the filly ran a great race on the right day. And now they’re taking her picture.”

It was a day of tragedy and triumph at rainy Belmont Park, with star 3-year-old Prairie Bayou suffering multiple broken bones in his left foreleg and not surviving, and long shot Colonial Affair winning the race as Julie Krone became the first female jockey to win a Triple Crown classic.

The historic finish was tempered by the death of Prairie Bayou, who had finished second the Derby and won the Preakness.  While racing down the backstretch in 11th place in the field of 13, the gelding suddenly buckled to his left. Jockey Mike Smith sensed the horse had taken a bad step over a rainy, slippery surface. Smith bailed out over the horse’s right side. Prairie Bayou jogged another 100 yards or so, then pulled up. He was taken away by ambulance and later euthanized.

There was still a mile to go after Prairie Bayou’s accident, and 12 horses in the race. As the field turned for home, Krone came charging to the lead with Colonial Affair (14-1) and won by 2 ¼ lengths over Kissin Kris (13-1), with Wild Gale (51-1) third. Derby winner Sea Hero was seventh.

Krone, a Hall of Famer, didn’t spend much time discussing her place in racing history.

“I don’t think the question has to be genderized,’’ she said.

The first Derby vs. Preakness winner showdown in six years produced no showdown at all. Derby winner Animal Kingdom (with John Velazquez aboard) nearly fell at the start, while Preakness winner Shackleford faded in the stretch.

And then along came Ruler On Ice, an allowance winner no less, and jockey Jose Valdivia, Jr., in his first Belmont no less. Sent off at 24-1 – the third longest shot in a 12-horse field — Ruler On Ice raced second behind Shackleford for most of the race run over a sloppy track, then took over as Shackleford dropped back and won by three-quarters-of-a-length over Stay Thirsty. Animal Kingdom was bumped at the start and dropped way back before finishing sixth. Shackleford was fifth.

“I’m a couple of yards from the wire and I’m thinking, ‘Oh my god, oh my god, I’m going to win the Belmont,'” said Valdivia after the race.

Ruler On Ice didn’t run in the Derby or Preakness but wound up beating the top seven finishers from the Run for the Roses. Ruler On Ice became just the second gelding to win the Belmont (Crème Fraiche won in 1985).

A year after Hall of Fame trainer D. Wayne Lukas nearly won the Triple Crown with Charismatic (who fractured a leg in the stretch at Belmont after winning the Derby and Preakness), he came up with a doozy of an upset: Commendable – a maiden winner in his first start and 0-for-6 thereafter – won at 18-1 odds against a field that did not include Derby winner Fusaichi Pegasus or Preakness winner Red Bullet.

Even with a field lacking stars, Commendable was a long shot among long shots. It looked easy, too. With the savvy Hall of Famer Pat Day aboard, Commendable stayed close to the pace set by Hugh Hefner and took the lead with a quarter-mile to go, defeating favorite Aptitude by 1 ½ lengths. It gave Lukas his 13th Triple Crown race victory – tying him for the record for most classic wins – a record he now holds alone after Oxbow won the Preakness in 2013.

The Belmont had three consecutive Triple Crown attempts before this Belmont, with Silver Charm (1997), Real Quiet (1998) and Charismatic (1999) coming up short in the final race of the series. It also marked the first time neither the Derby nor Preakness winner took part in the race since 1970.