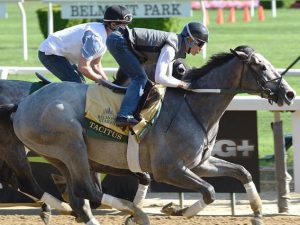 Soon after Juddmonte Farms’ Tacitus finished fourth in the Kentucky Derby (boosted to third officially after the winner’s disqualification), his Hall of Fame trainer, Bill Mott, put the Belmont Stakes squarely in his crosshairs for the flashy gray colt, deciding to skip the Preakness and have a fresh horse for New York. Mott also trained Country House to his Derby win via DQ, but the colt got sick shortly after the Derby and won’t make the Belmont.

Tacitus is a handsome gray son of Tapit, who as a sire has had a significant amount of luck with progeny in the Belmont and has been represented by the winner in three of the last five years — Tapwrit (2017), Creator (2016) and Tonalist (2014). His dam, Close Hatches, was a champion and multiple grade 1 winner around two turns, so this colt is more than likely capable of getting the 1 ½-mile Belmont Stakes distance.

Juddmonte previously won the Belmont Stakes with the Bobby Frankel-trained Empire Maker, who would go on to become the grandsire of 2015 Triple Crown winner American Pharoah. Previously Mott saddled Drosselmeyer to win the Belmont in 2010, so should Tacitus win he will be his second from his seventh starter. Jose Ortiz, who was aboard Tapwrit in 2017, will be back aboard.