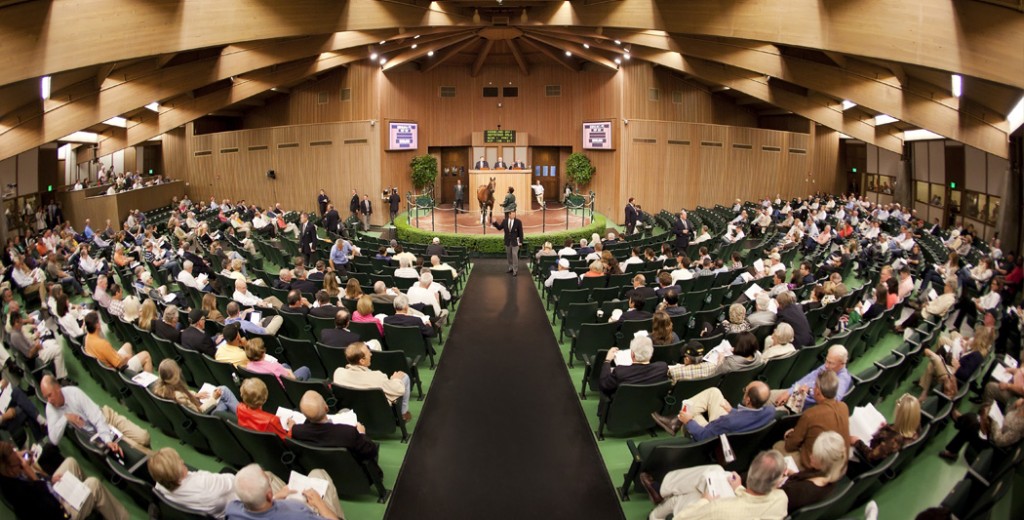 Keeneland race track kicks off its Spring 2016 meet in one month.  That means the most precocious of this year’s two-year-old crop will make their debuts. I know, I know… everyone is in the midst of Derby Fever and too busy to worry about a bunch of early maidens. Besides, those races are impossible to handicap, right?

The majority of handicappers avoid maiden races like a communicable disease, but there are ways to determine live horses in these races.

Doing your homework can pay off. 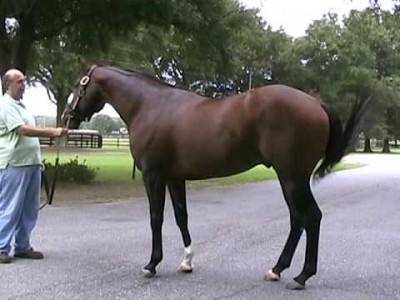 At the January 2006 Fasig-Tipton Calder sale of selected two-year-olds, The Green Monkey sold for a world-record price of $16 million. He was retired on February 12, 2008 after failing to break his maiden in his three lifetime starts (photo via Thoroughbred Horses in Kentucky)

As we discussed last week, pedigree is one of the most important factors in handicapping maiden races. A working knowledge of which sires and damsires get winners first time out is invaluable. Many past performance papers and software include information on the sires, dams, siblings and damsires of the first-time starter.

Besides sire stats, don’t neglect the records of the dam and siblings. Look for precocious siblings and dams. Those with blacktype are a sign of class. Become familiar with the auction abbreviations, such as OBS, KEE, BARR, and FTF. Look at the sales prices of two-year-olds in training. Speed sells and these babies do well in the very early maiden races.

Pedigree isn’t the only tool in the arsenal of the handicapper contemplating a maiden race.

Below are seven dependable factors to remember:

1) A debuting maiden in the one-post is usually not a good bet. They tend to break inward or become intimidated on the rail. Some will be used coming out of the gate in sprint races to grab the lead. A good horse can sustain it, but most will fold in the stretch. Additionally, a horse breaking from the far outside post will often break to the right, losing valuable ground while his jockey sorts him out.

2) Review the works. A horse that has fired a recent bullet breeze when there are at least five or more works at that distance is live, especially a first-time starter. A horse with a “live” work pattern (fast/slow/fast or slow/fast/slow) is also one to watch. This is especially true of horses from conservative barns that normally don’t win first time out. If their horses are working in the top five, it’s a good bet the horse will finish in the money. Often these horses go off at attractive odds. If possible, subscribe to a publication that reviews morning breezes. Knowing how the horse breezed is more important than knowing how fast he went. Would you rather back a horse who out-worked a stablemate in hand or a horse that was pushed hard to keep up?

3) Get to know which trainers and jocks excel with precocious babies. Look at the stats and use them in combination with the other tools listed. You likely won’t get any longshots this way, but it will help narrow the field, especially with your vertical bets.

4) A horse jumping from a sprint to route or even attempting a much longer sprint distance today against contenders who have experience at the race distance is suspect, unless the horse in question has posted three or more solid works of at least five furlongs or greater. That just sounds like common sense, but you’d be surprised how many trainers don’t give their horses stamina works and prefer to rely on long gallops to get their charges fit.

5) There is nothing like experience. In a field with mostly first-timers, if there are a couple of horses with previous starts, keep an eye on them. Even if these horses finished out of the money in their initial attempt, they are better prepared than the rest, especially if they are working well in the morning. This holds true with a horse that showed speed and faded first time out or found trouble during the race, then didn’t start again for more than a month.

6) Be wary of a horse attempting two or more new things in a race. Shipping to a new track, farther distance, stepping up in class and new surfaces should all be taken into account. How many times have you seen a horse that broke its maiden impressively ship in for a stakes race at a longer distance, go off at short odds, and finish out of the money? This holds true especially for young maidens because they are still learning; however, later season two-year-olds, or those with more than two races under their girth, stand a better chance of overcoming new factors. I will go into detail regarding maiden progression/regression in a future article.

7) Lastly, but most importantly, races aren’t won on paper. Learn the language of the horse and how to use physical handicapping to your advantage. More about that next week.

There are no steadfast rules in the world of handicapping, only general guidelines. Using the above tips can net some decent payouts.  But remember, just when you think you got it figured out, anything can and will happen in a horse race.

Next week, how to use physical handicapping to pick a winner…

Laurie Ross
Laurie Ross is a handicapper, pedigree consultant and published author. She is also a member of the National Turf Writers and Broadcasters Association. Laurie maintains her pedigree website Iron Maidens Thoroughbreds and pedigree handicapping blog, IMTBreds, where she focuses on two-year-olds and maidens through the Triple Crown Trail.

Since 2008, Laurie has been a featured writer and pedigree analyst with Horse Racing Nation. Laurie’s yearly publications contain tremendous insight and value for bettors and horsemen. The Freshmen Sire Guide has received accolades from leading trainers and handicappers. Her Triple Crown e-books continue to be a best-selling feature. Laurie’s work has been featured on numerous websites and she is a recurring guest on sports radio programs.

Laurie has been around horses for most of her life, working in racing stables as a hot walker and exercise rider in her teenage years, and later as a volunteer with rescued and retired racehorses. She attends thoroughbred auctions year round on behalf of clients and manages the breeding operations for a racing/breeding syndicate.