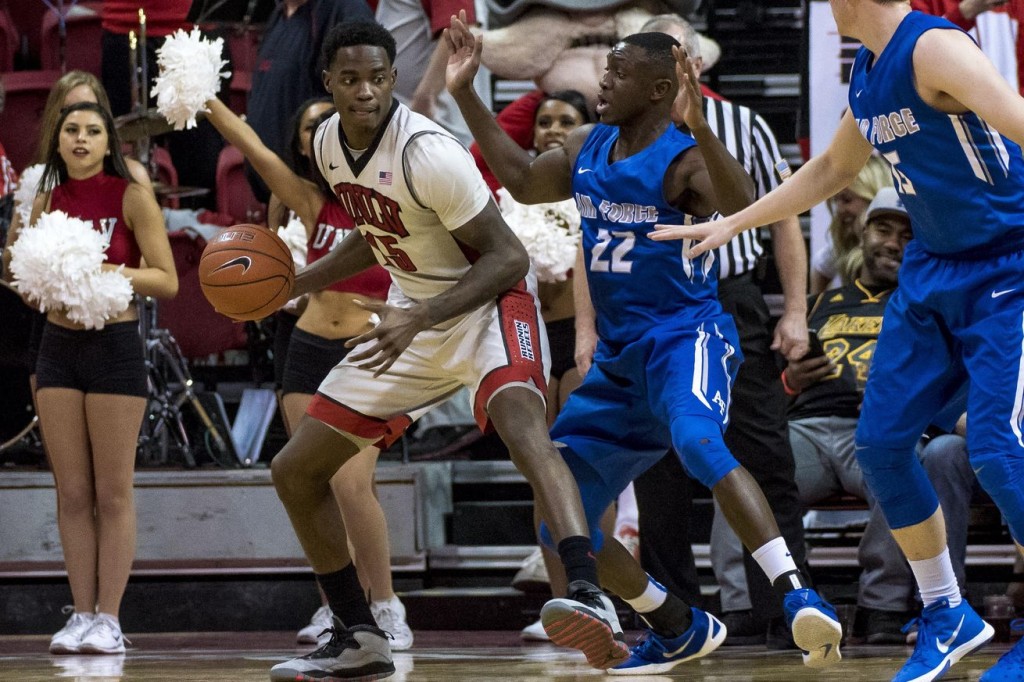 Conference tournament season is upon us and, this week, I have three basketball games to discuss — hoping to stay undefeated in hoops on US Racing.

Having lived in Las Vegas for six years and (rarely) attending UNLV, I have a decent feel for the culture there and let’s face it: it’s been a bad year for the Runnin’ Rebels (17-13 / 8-9 MWC).

Air Force is flat-out brutal on the road, losing their 2016 calendar-year road games by an average of 15.4 points, including their last trip to the Thomas & Mack Center in Vegas where they were blown-out by 36 points (100-64).

The Rebels were a 16-point favorite in that game, but may be looking at a shorter number than that to cover on Wednesday (projected line UNLV -13 or -14 by my estimation based on various power rankings). This is due, at least in part, to the Falcons beating UNLV in Colorado Springs, 79-74, when UNLV was favored by eight.

So, this is a revenge game for UNLV, at home, and although they played Fresno State tough the last time they met the Bulldogs, it’s pretty obvious that this will more than likely be their last win of the year.

For Air Force, it’s just the merciful end to a terrible season.

UNLV’s Patrick McCaw is first in the Mountain West in steals (2.55/game) and third in the conference in assists (4.0/game).

The Rebels’ Stephen Zimmerman Jr. did not play in the loss at Air Force, but will be in the starting lineup on Wednesday. He is second in rebounding in the Mountain West with 9.12 rebounds per game.

With Zimmerman Jr. in the lineup, the Rebels out-rebounded Air Force 52-20.

They outscored the Falcons 53-25 in the first half, before winning by 36.

Look for UNLV to blow Air Force out of the building again on Wednesday and, even if the line is once again Rebels -16, lay the lumber. Look for a 20-point victory and a no-sweat cover.

This game is almost a carbon-copy of the UNLV/Air Force game with a huge exception — the team I think will win by 20 points is on a six-game losing streak.

The Hoyas next lost at Providence (as a short underdog), then reeled off losses to very good Big East teams in Seton Hall, Xavier and Butler at home; then, on the road, at both Marquette and conference champ Villanova (on “Senior Night” at each venue).

Speaking of Villanova, the winner of this game plays the Wildcats in the next round.

This game will be played at Madison Square Garden in New York, so it’s a neutral-court game. The Blue Demons are 4-13 (1-2 on neutral courts) away from home this season.

When the teams played at DePaul on Dec. 30, Georgetown was a four-point favorite and won by twelve, 70-58.

At Georgetown, the line closed with the Hoyas as a 10-point favorite on Jan. 9 — a game that they barely covered, winning by eleven.

At the Garden, look for the Hoyas to be an 8-or-9-point favorite and expect them to win by 20 or more points… exorcising their demons, so to speak.

Having most recently played the best the Big East has to offer; then, getting a pushover in the first round of the conference tournament is just what the Hoyas need. They will snap their losing streak with authority.

For DePaul, like Air Force, it will be the end of a miserable season.

Georgetown’s D’Vauntes Smith-Rivera scored 15 points in the first matchup with the Blue Demons and 17 in the second. He leads the team in scoring, averaging 16.3 points per game.

DePaul is led in scoring by Myke Henry (13.9 points/game). The Blue Demons rank 285th in the nation with a 68.0 point-per-game average.

Bet the Hoyas until the line goes to -14. Expect another 20-point blowout.

This game shapes up to be close to a “pick-em” game, as I don’t project either team to be more than a 1 ½-point favorite.

Including the win in Waco, the Longhorns are 6-4 in their last 10 games (7-3 against the spread). To go with the loss in the rematch with the Bears, Texas also lost at Oklahoma and Iowa State, and at home to conference champ Kansas.

In that same span, Baylor is 4-6 straight-up (5-5 ATS) and have lost three of its last four games.

Bears senior Rico Gathers had been the early-season point leader as expected, but his production has fallen off a cliff since his 20-point performance in the loss to Texas.

He did not play in the team’s recent wins at Kansas State and against Iowa State, and has averaged only 5.9 points per game in the seven games he’s played since Feb. 1. This from a guy who has had 14 double-digit scoring games, including two games with 20 or more points, and a season-high 31 points against cupcake Northwestern State.

After the win at Texas, in which Baylor’s Johnathan Motley looked like the heir-apparent to Gathers as the chief scoring threat, the sophomore has played one decent game and three clunkers — scoring eight against Kansas, 22 at TCU (the good game), two points in 19 minutes against Oklahoma, and was kept off the score sheet in 14 minutes of playing time against West Virginia.

What we have here is two teams trending in opposite directions.

The key is for Longhorn guard Isaiah Taylor to stay out of foul trouble. He leads Texas in scoring (15.0 points/game) and assists (4.8 per game), but accumulated four fouls in both games against Baylor — missing nine minutes in the win and 19 minutes in the loss.

If Taylor stays on the floor, Texas should win this game, although it should be an exciting contest.

Even if the game becomes a “public play” and the line goes to Texas -3, still play it, laying the points.

Anything higher, look at a moneyline bet on the Longhorns, as I believe they will win this game and go on to face #1 Kansas.