Bob Baffert’s Dortmund had his final work prior to Saturday’s San Diego Handicap.

The Del Mar worktab was busy, with just about every star located in the Golden State this past weekend gearing up for their next appearances at various venues around the country over the coming weeks. One of the most anticipated races is Saturday’s $200,000 San Diego Handicap (GII), which marks the return to action for California Chrome, who reigns as the richest North American-based runner of all time with current career earnings of $12,532,650 and hasn’t started since the March 26 Dubai World Cup (GI).

On Saturday, the 2014 Horse of the Year logged five furlongs in :59 1/5, breezing, as he was put through his final prep for the 1 1/16-mile test, which will be the flashy chestnut’s first since capturing the $10 million Dubai World Cup (G1) in March. The San Diego serves as Del Mar’s major prep for the August 20 Pacific Classic (GI), the seaside oval’s marquee event and also a Breeders’ Cup Classic (GI) “Win and You’re In” qualifier.

With regular exercise rider Dihigi Gladney aboard, California Chrome was clocked in splits of :12, :23 4/5, :35 3/5 and :46 4/5 before galloping out in 1:13. He was also the only one who received the designation of “breezing” which, as Left Coasters know, means the drill was easy and effortless.

“He’s got his game face on,” trainer Art Sherman said. “He’s a different horse when he’s ready to run. I’m very pleased with what I saw.”

Gladney, who has been aboard the colt for most of his morning works for the better part of a year, was equally impressed with the move.

“It was a really good work and he likes the track,” Gladney said. “I’ve worked other horses on it and I thought it was a little heavy. But he handled it easy.” 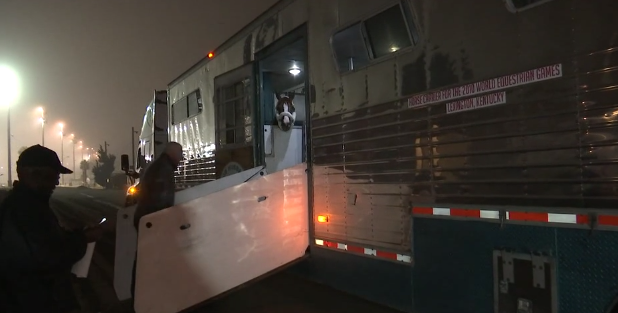 California Chrome on his way to Dubai.

On Sunday, Grade I winner Dortmund worked for his highly anticipated and long-awaited return to action in Saturday’s San Diego, posting a five-furlong move in :59 in company with stablemate Fusaichi Samurai, who completed the distance in :59 4/5. The Bob Baffert-trained duo was out on the track at 10:30, long after the track had closed for training.

With jockey Stewart Elliott aboard, the big chestnut son of Super Saver, who hasn’t raced since winning the Native Diver Handicap over the track last November 28, went in splits of :24 1/5, :47 3/5 and galloped out seven furlongs in 1:25 3/5. Hall of Famer Gary Stevens will ride the Kaleem Shah color-bearer Saturday.

Also out on Sunday was three-time champion Beholder, last year’s winner of the Pacific Classic (GI) who is expected to defend her title this year after prepping in the $300,000 Clement L. Hirsch Handicap (GI) on July 30.

“She’s ready to run so we weren’t trying to invent anything, just get some good wind in her and we did that,” Hall of Famer Richard Mandella said. “I think she’s as good as she can be and everything went exactly right this morning.”

She’ll likely get her final drill for the 1 1/16-mile Hirsch next weekend.

“She went the first three-quarters in 1:11 2/5 and galloped out to a mile in 1:38.98,” trainer John Sadler said. “A very nice work, we’re very pleased. She’s doing beautifully and this will be the second race off a comeback. We’re not making any predictions because we know we’re running against a great champion in Beholder.”

Two local three-year-olds heading out of town for their next races drilled at Del Mar Sunday morning, the first being Kentucky Derby (GI) winner Nyquist, who logged a five-furlong move in 1:02. Under regular rider Jonny Garcia in preparation for the July 31 $1 million Haskell Invitational (GI) at Monmouth Park. in company with Snappy Jack, Nyquist went the first half-mile in :48 3/5.

Fox Hill Farm’s champion Songbird, who will fly to New York on Tuesday to contest Saturday’s $500,000 Coaching Club American Oaks (GI) at Saratoga, was the other top sophomore working sunday and the Jerry Hollendorfer trainee went a bullet six furlongs in 1:11 2/5 under regular jockey Mike Smith. The daughter of Medaglia d’Oro reeled off splits of :23 1/5, :45 2/5 and :59 before galloping out seven furlongs in 1:25 and a mile in 1:39 under her Hall of Fame pilot.

Songbird is undefeated in eight career starts and has earned $2,102,000.