A couple of Derbies set for California, Indiana 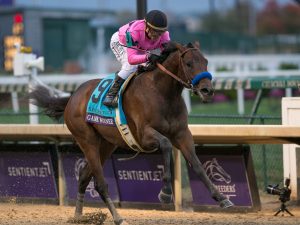 The $150,000 Los Alamitos Derby (G3) returns to be contested for the sixth time at the northern Orange County racetrack after spending four decades known as the Swaps Stakes at the now defunct Hollywood Park.

A lot of stakes simply disappeared when the demolition crews took down Hollywood Park, but of the ones that survived have managed to keep its status as attracting top horses.

The previously undefeated Triple Crown winner Seattle Slew suffered his first defeat in the Swaps when he was fourth, beaten 16 lengths, by J. O. Tobin in 1977. Some other big names to have won this event include Precisionist, Best Pal, Thunder Gulch, Free House, Captain Steve, Came Home and Rock Hard Ten.

Since its relocation to Los Alamitos, it has continued to draw some impressive fields and standout winners, including champions Shared Belief, Accelerate and West Coast. This year, champion Game Winner, who is unraced since his better-than-it-looks sixth-place finish in  the Kentucky Derby (G1) , is one of just four who will head postward and the stronger half of the two Bob Baffert-trained runners.

The southern California heat finally arrived and it’s expected to be warm at Los Alamitos on Saturday, with highs reaching into the mid-80s. By the sixth race feature’s post time of 3:28 p.m. PT, the temperature should be about 80 degrees.

Baffert has won this race a record eight times, both at Hollywood Park and Los Alamitos, including three of the last six runnings. He will saddle Gary and Mary West’s Game Winner here, most likely to get a race into him and build his confidence before shipping East for some of the bigger events for sophomores this summer, including the Travers Stakes (GI) at Saratoga in August and the Pennsylvania Derby (GI) in early September. In 2007, this plan worked like a charm for the Wests’ West Coast, who captured this race and then both the Travers and the Pennsylvania Derby before going on to finish third in the Breeders’ Cup Classic (GI) at Del Mar and also earn the Eclipse Award as the nation’s top 3-year-old male.

Game Winner had a bit of a break after the Derby and has been lighting up the Santa Anita work tab in the mornings since early June. Regular jockey Joel Rosario, who won three races on Saratoga’s opening day card, will be in town for the race and though the inside post isn’t ideal, the field size and his early running style can more than overcome the issue.

California Derby winner Kingly returns after a bumpy trip in the Affirmed Stakes (G3) at Santa Anita on Memorial Day weekend. The homebred son of Tapit, who is a full brother to Grade 2 winner Mohaymen, is another of Baffert’s who will likely hit the road this summer, so this is also likely a prep for some bigger races on his horizon. His best certainly earns him at least a runner-up finish, should the favorite falter.

California-bred Feeling Strong returned to the main track last out to win a first-level allowance after struggling over the turf in two races previously. He is stakes-placed, but has never faced the likes Game Winner, before. The Hector Palma trainee will be ridden by Tiago Pereira.

Trainer Doug O’Neill sends out Parsimony, who has yet to break his maiden in ten starts. He returns to dirt after a second and two thirds over the turf in maiden and stakes company and gets the services of Martin Garcia for the first time. 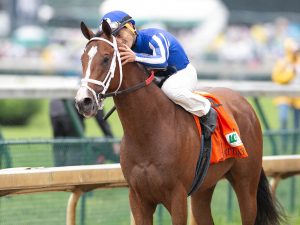 The Kentucky Derby may be over, but the Derbies keep on coming.

Last month, Owendale won the Ohio Derby (G2), and a week ago the listed Iowa Derby was won by the lightly-raced Top Line Growth.

On Saturday, it’s the 25th running of the Indiana Derby at Indiana Grand and a field of 11 is set to head to the gate and race the 1 1/16 miles for the lion’s share of the $500,000 purse.
The Midwest weather continues to be hot and sweltering and by the 10:02 p.m. ET post time for the feature, the temperature will have dropped to a more reasonable level of mid-70s, though it will still be sticky and steamy.

The Indiana Derby was first contested in 1995 down the road a Hoosier Park in Anderson, but when that track went all harness racing the Hoosier State’s signature event for 3-year-olds moved to Indiana Grand in Shelbyville.

Trainer Bob Baffert has sent out four winners of this race and jockey Robby Albarado is the most successful Indiana Derby jockey having ridden three winners.

Allied Racing Stables’ Mr. Money carries a two-race graded stakes-winning streak — the Pat Day Mile (G2) and Matt Winn Stakes (G3) at Churchill Downs – into Indiana and is the morning-line favorite at 6-5 despite drawing the outside post. He struggled a bit on the Kentucky Derby trail, but the son of Goldencents has clearly found his groove and is the one to beat. Trainer Tom Amoss and regular jockey Luis Saez both seek their first Indiana Derby victories.

Former claimer Math Wizard is looking for his initial stakes victory after a strong runner-up performance to Owendale in the Ohio Derby. The Saffie Joseph Jr.-trained son of Algorithms has been improving with each start this year and his numbers suggest he fits among the top contenders. Edgard Zayas returns to ride and the pair will break from post position 10.

Rebel Stakes (G2) winner Long Range Toddy was third in the Ohio Derby in his first start since 16th-place finish in the Kentucky Derby. He is trained by Steve Asmussen, and will be ridden by Jon Court.

Gray Magician makes his first start since his last-place finish in the Kentucky Derby.  The Pete Miller trainee was second in the UAE Derby to qualify for the Derby, where he was clearly overmatched.

Alwaysmining was riding an impressive six-race win streak before being soundly defeated in the Preakness (GI), but returned to run a decent third in the Easy Goer at Belmont Park.