Chad in Charge for Diana, the Spa’s First Grade 1 of the Meet 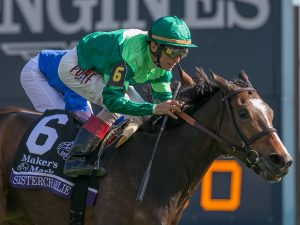 Chad Brown is off and running at Saratoga Race Course – at least his horses are.

The three-time Eclipse Award-winning trainer is back at his home track (OK, so it’s about 15 miles from his hometown of Mechanicville, New York) after capturing yet another Belmont spring/summer title with 38 victories – twice as many as runners-up Todd Pletcher and Rudy Rodriguez.

A year ago, Brown smashed the record for wins at the Saratoga meet with 46, six more than the previous mark he shared with Pletcher. While he didn’t have a say in Thursday’s opening day stakes – the Quick Call (G3) or the Schuylerville (G3), he’s saddling a pair in Friday’s $150,000 Forbidden Apple (G3) – Offering Plan and Made You Look — and he’s loaded  for Saturday’s $500,000 Diana – the first Grade 1 of the meet.

Of the six fillies and mares 3 and up entered in the 1 1/8-mile Diana on the turf, four are trained by Brown: Sistercharlie, Rushing Fall, Homerique and Thais.

Brown has owned the Diana recently. The 40-year-old trainer is looking for his third straight win in the race, and fourth overall. Zagora won in 2012 and Lady Eli won in 2017 on their way to Eclipse Award-winning seasons. Peter Brant’s Sistercharlie, last year’s champion older mare, returns for her first start of the year, looking to repeat in the Diana, which was followed by victories in the Beverly D (G1) and the Breeders’ Cup Filly & Mare Turf (G1).

The 5-year-old Ireland-bred has earned over $2.5 million, and is ready to go again after a strong recent workout at Belmont Park. The 8-5 morning-line favorite will be ridden by John Velazquez form the No. 4 post

“I wish I had a prep race for her but she just ran out of time, unfortunately,’’ said Brown. “It’s a tall order to start her back in a Grade 1, but she’s a champion and she likes the course having won last year, so we’re going to give her a shot.”

Rushing Fall will provide plenty of competition, coming into the race with eight wins in nine career starts for e Five Racing Thoroughbreds, including four Grade 1’s. The More Than Ready filly won the Jenny Wiley (G1) and then took the one-mile Just a Game (G1) at Belmont in her last start.

“This will be the toughest race she’s ever run in but she’s doing really well,’’ said Brown. Javier Castellano has the call.

Homerique, also owned by Peter Brant, is 2-for-2 in the U.S. since being moved to Brown’s stable, and will be making her Grade 1 debut.

“She’s an extremely versatile and talented filly and I expect her to run well,’’ said Brown. Irad Ortiz, the Spa’s leading rider last year, will be aboard.

Thais is yet another Brant-owned entry, who comes into the Diana with three victories in 15 career starts in Europe and the U.S. In her only race this year, she finished fourth in the Plenty of Grace Stakes at Aqueduct in April.

The “outsiders” are Mitchell Road and Secret Message, either being capable of upending Brown’s brigade.

Mitchell Road, trained by Hall of Famer Bill Mott, has won four in a row, including the Gallorette (G3) at Pimlico.

“It’s a very competitive field,” said Mott. “She’ll need to step up again, but she’s been working well and we’ll take our shot.”

Graham Motion sends out Secret Message a year after his Ultra Brat came up a nose short to Sistercharlie in the Diana. She is 2-for-2 this year.

A field of five is set for the Spa’s first 2-year-old stakes for males, and perhaps a look at some early contenders for the 2020 Kentucky Derby (G1).

Donald Dizney’s Cucina is the 8-5 morning-line favorite has two races under his belt, a runner-up finish in his first race, and a win in an off-the-turf five-furlong sprint at Belmont on June 21.

“We had him in on the grass and it came off, but he ran good,’’ said trainer Mark Casse. “We entered and we’ll have a look.”

Tomato Bill, a 3 ¾-length winner in his debut at Delaware Park in May for trainer Christophe Clement; Doug O’Neill-trained Raging Whiskey; By Your Side, who broke his maiden at Churchill on June 14; and Memorable, who ran fifth in the Tremont at Belmont on June 7.