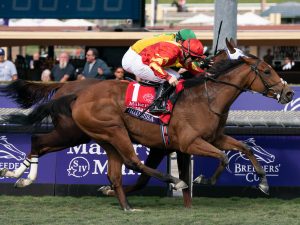 Even superstar Sistercharlie couldn’t overcome the bias against the closers on Santa Anita’s turf course.

Chad Brown‘s great mare was too far back early on Saturday, and the 4-5 favorite ran a non-threatening third to Irish shipper Iridessa, a 13-1 shot who edged another longs hot, Vasilika, by a neck in the $2 million Breeders’ Cup Filly & Mare Turf.

Sistercharlie, the defending champion, was 2 1/4 lengths behind the runner-up. The 5-year-old Sistercharlie came into the race with a six-racing winning streak, and was 3-for-3 this year before the defeat.

“The track is really hard, which is a disadvantage for my horse,” Sistercharlie’s jockey John Velazquez said. “I was right behind the winner, but the way the track is, the speed is holding on. She ran well but she didn’t like it.”

Joseph O’Brien trains the winner, who sat a distant third behind runaway pace-setter Mirth before surging into the stretch under Wayne Lordan. It was the fifth win in 12 starts for the 3-year-old filly, who added Lasix for the first time. She paid $28.40 after running 1 1/4 miles in a brilliant 1:57.77 to give Europe its first win at the 36th Breeders’ Cup.

It was the first Breeders’ Cup victory for Lordan and also for O’Brien, who won the 2011 Turf on St Nicholas Abbey for his father, Aidan O’Brien.

“We just wanted to be in a nice position early, and she was able to do that,’’ the 26-year-old O’Brien said. “Wayne gave her a fantastic ride. It hasn’t sunk in yet. It’s unbelievable.”