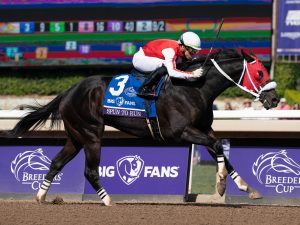 Hall of Fame trainers Richard Mandella and Bob Baffert had the marquee horses, but the little-known Juan Carlos Guerrero had the one to bet on in the $1 million Breeders’ Cup Dirt Mile (G1).

The Parx-based Guerrero had 9-1 shot Spun to Run ready for a peak effort Saturday, and he led throughout for Irad Ortiz Jr. in an easy, 2 3/4-length win over Mandella’s odds-on favorite, Omaha Beach.

Spun to Run was gone when Mike Smith swung Omaha Beach wide into the stretch at Santa Anita, and the former morning-line favorite for the Kentucky Derby never threatened.

Improbable, who ended up as the Derby betting favorite three days after Omaha Beach was scratched, never seemed comfortable on his home track. Rafael Bejarano got no response as his mount backpedaled on the far turn. It was his sixth loss in seven starts this year.

“I try to do my best, and when we turned for home I didn’t see anyone and let her pick it up, and she did,’’ Ortiz said.

Owner Robert Donaldson said the horse “has been a dream for us, and Carlos has done a fabulous job with him. We’re so fortunate to have this horse.”

Mandella was far from distraught, even though Omaha Beach got off to a poor start.

“Mike thought he was much the best, he just stumbled and didn’t get away good,’’ Mandella said. “That’s part of racing. That’s why we put them in the gate and line ‘em up. I’m still very proud of him.”