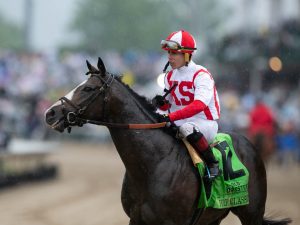 A well-rested Bricks and Mortar, unbeaten in five starts this year, tops a full field of 14 pre-entries for the $4 million Breeders’ Cup Turf, one of several BC races that could determine Horse of the Year.

Bricks and Mortar, last seen winning the Arlington Million (G1) on Aug. 10, will be running 1 ½ miles for the first time in his career, which has produced 10 victories in 12 starts and nearly $4.9 million in earnings for Klaravich Stables and William Lawrence.

“I thought he’s had a pretty solid campaign, shipping around a lot and I thought it was time to freshen him up,’’ trainer Chad Brown said, adding that Bricks and Mortar has been training quite well in recent weeks.

Bricks and Mortar, a 5-year-old son of Giant’s Causeway, will likely be the favorite in a field that includes European challengers Anthony Van Dyck and Old Persian, both Group 1 winners. Also pre-entered are “Win and You’re In” victors Acclimate (Del Mar Handicap) and Arklow (Joe Hirsch Turf Classic).

Bricks and Mortar started the year by winning the Pegasus World Cup Turf Invitational (G1) and then reeled off victories in the Muniz Memorial Handicap (G2), the Turf Classic (G1), and the Manhattan (G1) before taking the Arlington Million.

Currently, Bricks and Mortar is the No. 1-ranked horse in the National Thoroughbred Racing Association’s Top 10 horses.

“I think Bricks and Mortar has put himself in position to have a good shot at Horse of the Year,’’ Brown said.

The post-position draw and morning-line odds are scheduled for Monday.