At the Spa: Vino Rosso scratched; Pletcher still has 2 for the Woodward Stakes

This has not been the greatest Saratoga summer season for Todd Pletcher, although you have to remember the high standards he expects from his string of thoroughbreds.

A 13-time leading trainer at Saratoga Race Course, considered by many the most prestigious meet in the country, or anywhere for that matter, Pletcher has 15 victories from 103 starters for a 15 per cent winning percentage entering the final weekend of the meet. That’s pretty darned impressive, but we know how dominant he’s been in the past. Of those wins, just one has come in a graded stakes – with Channel Cat in the Bowling Green (G2) on July 27. 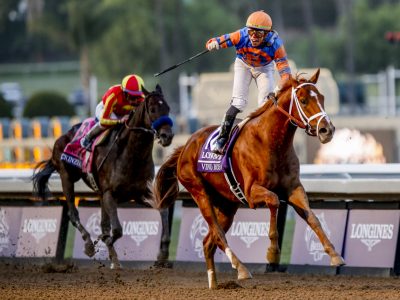 Regardless, Pletcher is looking for a big Labor Day weekend even though he’s now down to two horses for the $750,000 Woodward Stakes (G1) after Vino Ross was scratched Saturday morning.

Repole Stable and St. Elias Stable’s Vino Rosso looked to be Pletcher’s best chance and was a 7-2 co-third choice in the field, down to eight 3-year-olds and up going 1 1/8 miles. He’ll still send out Wooderson at 12-1 and Bal Harbour at 15-1

Let’s Go Stable’s Wooderson ran second in the Alydar Stakes at the Spa on Aug. 2, a race won by Tom’s d’Etat, who is the Woodward’s 4-1 co-favorite behind 5-2 top choice Yoshida. Wooderson has three victories, including one last July at the Spa.

“He’s a horse that we figured would get better with age all along and it seems like he’s starting to find his rhythm,’’ said Pletcher. Jose Ortiz has the mount.

Red Oak Stable’s Bal Harbour, who ran a strong second to War Story in the Monmouth Cup in July, is in search of his first graded stakes win.

“He’s training great, so we’ll see what he does,’’ said Pletcher. Hall of Famer Javier Castellano has the call.

The field, from the rail out is Mr. Buff, Bal Harbour, Mongolian Groom, Preservationist, Forewarned, Yoshida, Wooderson and Tom’s d’Etat.

Yoshida, trained by Hall of Famer Bill Mott, won last year’s Woodward and looks to become the first back-to-back winner since Lido Palace in 2001-2002. The Japan-bred was second in the Whitney in his most recent start.

In the Prioress, a six-furlong sprint for 3-year-old fillies, Break Even looks to go 7-for-7 when she takes on five rivals. Owned by Klein Racing, the filly is trained by Brad Cox.

Break Even started her career with a pair of wins at the Fair Grounds, then stepped up and won the Purple Martin Stakes at Oaklawn Park. She then won the Eight Belles at Churchill Downs, the Jersey Girl at Belmont Park despite a bobble at the start, and then won on turf, taking the Coronation Cup on July 15. Shaun Bridgmohan has the call aboard the 1-2 favorite. 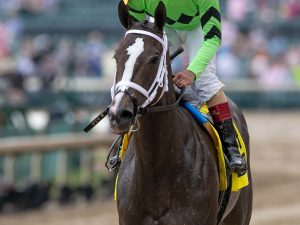 In the Glens Falls, the Spa’s leading trainer Chad Brown will send out three horses in a field of nine for the 1 3/8-mile race over the inner turf course.

Brown, seeking his seventh graded turf stakes win of the meet, sends out R Unicorn Stable’s Santa Monica, the 2-1 favorite, along with Wise Racing’s Fools Gold at 5-2 and Martin Schwartz’s Night of England at 12-1.

The 6-year-old Santa Monica has two wins this year, including the Sheepshead Bay (G2) at Belmont in May. In her last race, she had a troubled trip and finished third in the Waya (G3) at Saratoga on Aug. 4. Jose Ortiz, the meet’s leading rider, has the mount.

A pair from Graham Motion will be among the challengers in

In two starts for Motion, the 5-year-old Empressof the Nile ran fifth in the Dance Smartly (G2) on June 29 at Woodbine and won a second-level allowance at Saratoga on Aug. 1. Mrs. Sippy is making her first start in North America.

In the Saranac, Live Oak Plantation’s Global Access takes a whole of experience into the 1 1/6-mile turf race for 3-year-olds. 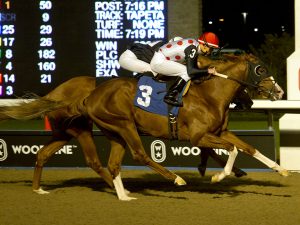 A chestnut son of Giant’s Causeway, Global Access is making his eighth start of the year, with a pair of victories, a second and two thirds, including a third in his previous start, the National Museum of Racing Hall of Fame Stakes (G2) at Saratoga on Aug. 2.

“It was a good race,’’ said trainer Michael Trombetta of Global Access’ last start. “It wasn’t a perfect trip, but it wasn’t a bad trip. Hopefully, he can have some good racing luck this weekend. Velazquez will be aboard.

Klaravich Stables’ Good Governance rallied from 11th to win by a nose in his debut on Aug. 4. The 3-year-old is the 2-1 favorite.

Frank’s Rockette is the 8-5 morning-line favorite ahead of Perfect Alibi despite losing to the filly by a half-length in the Adirondack (G2) at the Spa on Aug. 4.

Frank’s Rockette, trained by Mott, will be ridden again by Julien Leparoux. Prior to her defeat in the Adirondack, the filly won in her debut by 8 ¾ lengths at Churchill Downs on June 21.

Tracy Farmer’s Perfect Alibi, trained by Mark Casse, has won two of three starts, breaking her maiden by 9 ½ lengths at Churchill on May 16, before running second in the Astoria at Belmont on June 6.

“She’s doing as well, if not better than she was, heading into the Adirondack, so I expect her to run back,” said Casse. “I think the seven furlongs will be a plus.”