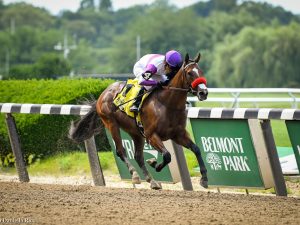 Monday’s $300,000 Runhappy Del Mar Futurity (G1) marks closing day of the prestigious summer racing season at Del Mar, but before heading back north, eight juveniles will square off over seven furlongs in an attempt to claim the title as the West Coast’s leading 2-year-old for the Breeders’ Cup Juvenile (G1) in two months.

Hall of Famer Bob Baffert basically owns this race, having saddled 14 winners since his first in 1996 and this year sends out a pair, including the morning-line favorite Eight Rings and the promising maiden Garth.

Since first contested in 1948 some good horses have reached the winner’s circle after capturing the Del Mar Futurity, but the event rose to national prominence in the late 1970s when Flying Paster won en route to a standout 3-year-old campaign, which included a runner-up finish to Spectacular Bid in the Kentucky Derby (GI).

SF Racing LLC, Starlight Racing, Madaket Stables LLC, Hertrich, III, Frederick, John D. Fielding and Golconda Stables Eight Rings is the 5-2 favorite off his 6 ¼-length maiden score over this track a month ago. But what was most impressive about the win wasn’t the margin of victory, it was how he did it and the numbers he was rewarded with for it, including a field-high BRISnet speed figure of 100. Drayden Van Dyke, who is chasing Flavien Prat to win his second Del Mar riding title, is set to ride in search of his first Del Mar Futurity win

Storm the Court, a $50,000 son of Court Vision, impressed in his debut, winning by 1 ½ lengths at odds of 12-1 over a good field, including Garth. Trainer Pete Eurton has yet to win this race, but he’s sent out some good runners to good performances this meeting and has saddled his share of standout horses. This stalker earned some strong figures when winning and any kind of improvement makes him dangerous. Prat, who is likely to win the jockey title, will ride from the rail, which isn’t an ideal post at the distance but has been overcome by good horses.

Ginobili broke his maiden for Slam Dunk Racing, McClanahan and Nentwig in his second start two weeks ago in wire-to-wire fashion and is back in search of a stakes win. This $35,000 son of Munnings has Richard Baltas, who hasn’t won this race yet but is neck and neck with Doug O’Neill for the trainer title, at the helm. Expect jockey Florent Geroux to go right to the front and not look back.

O’Neill, who sent out juvenile champion and Kentucky Derby (G1) winner Nyquist to victory here in 2015, will roll the dice with maiden Defense Wins, who was second in his only race here six weeks ago. The $175,000 son of Flatter was running strongly from off the pace at the end of that five-furlong dash so these extra two furlongs should only help. Rafael Bejarano, who won this race on Rolling Fog in 2012 and Klimt in 2016, returns.

Godolphin’s homebred Garth was highly regarded for his debut, where he finished second after a bumpy break and awkward trip. The blinkers go on this son of Into Mischief in an effort to get him to focus on the task of racing and it’s a good bet we’ll see him closer to the pace than his mid-pack trip from before. Mike Smith picks up the mount from Martin Garcia and this colt’s works indicate he’s ready for a better try.

Fore Left won the Tremont Stakes at Belmont Park for O’Neill and Paul Reddam and returned to finish third in the Best Pal (G2) three weeks ago. The son of Twirling Candy has two wins already under regular jockey Mario Gutierrez and has the right off-the-pace running style if the pace is quick, as is likely, and the extra distance should help.

Peter Miller sends out Best Pal runner-up Wrecking Crew for his third start and the improving son of $875,000 son of Sky Kingdom fits well here if he repeats his last. He broke badly that day and raced mostly wide, so if he gets closer to the early pace at the break and has less to do, he could be dangerous for the upset. Hot jockey Abel Cedillo takes over for Smith, and the outside post will hopefully help him get in a good early position for the run up the backstretch.

Nucky returns off a nice 10 ½-length win for a $100,000 price tag two weeks ago in his first local start, but his fourth career start. He showed good courage to duel and draw off that day and the separation from that expensive claiming price to maiden company isn’t terribly significant, so this is a logical step for a first stakes appearance for Miller. Norberto Arroyo Jr. is back aboard and if he measures up to the competition, his best should earn him a share.