Sealiway will be making his first start since posting the mild upset in the Quipco Champion Stakes (G1) at Ascot four months ago and it will also be his first start on dirt. 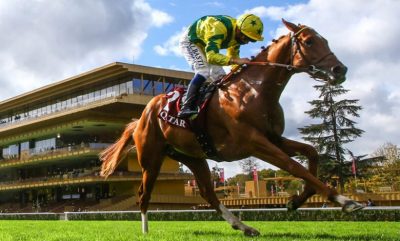 “Sealiway works on the sand in the mornings and he’s very impressive on it,” Pauline Chehboub, racing manager for her family’s stable, said. “We think it will suit him well, we don’t think it will be a problem. He is a very flexible horse. He has a lot of speed and we saw in the Arc that he can stay. We are confident he can adapt to different distances and tracks.”

In 2020, Sealiway also won the Prix Jean-Luc Lagardere (G1) (previously the Grand Criterium), France’s oldest and most prestigious race for juveniles, before shipping to Kentucky for a fifth-place finish in the Breeders’ Cup Juvenile Turf (G1). Last year, he finished a decent fifth in the Prix de l’Arc de Triomphe (G1).

In what may have been his best performance, though he didn’t come away with a victory, Sealiway finished second to Cartier Horse of the Year St Mark’s Basilica in the Prix du Jockey Club (G1) at Chantilly last June.

“He had a brilliant (2021) season, just as we hoped,” Chehboub said. “It was a great run behind St Mark’s Basilica in the Prix du Jockey Club, and he then ran a nice race in the Arc before that huge performance in the Champion Stakes. We always believed he was a top-class horse, and he showed his talent at Ascot. The best is yet to come with him

“(The Champion Stakes) wasn’t a surprise for us, he was in very good form after the Arc. He was the best 2-year-old in France after his win in the Lagardere and he proved after Ascot that he was the best three-year-old. It was a crazy day, very emotional. We were so pleased with him, he’s very special.

“We are planning a big international campaign. We’re not sure exactly where yet but there is the Arc in October and I’m sure we’ll be going back to Ascot at some point. The first thing is Saudi, we’ll make a plan after that. We think 2022 is going to be a very big year for Sealiway.”

Betting advice: As a deep closer with plenty of pace to run at late, this horse may offer some value. He has faced and either defeated or run with some of the best in Europe so a top performance here would not be a shock providing he’s fit off the layoff.

Notes: In the Saudi Cup, Sealiway will make his first start in the care of trainer Francis-Henri Graffard after his previous two trainers, Frederik and Cedric Rossi (as well as a nephew, Charley) were arrested by French authorities back in December and summarily suspended by French racing officials in a controversial doping scandal … The Saudi Cup was always on the radar for this horse’s owners, so after switching yards the goal remained the same.