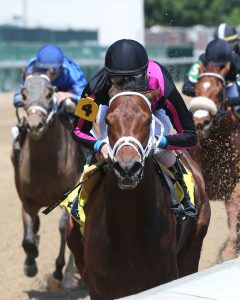 This Bruce Lunsford homebred was a top 3-year-old in 2021 heading into the Kentucky Derby (G1) after winning the Blue Grass (G2) at Keeneland for trainer Tommy Drury Jr., but a foot injury kept him from running. He did make the Preakness (G1), where he was fourth, then won the Ellis Park Derby, before closing out his sophomore season with a poor showing in the Breeders’ Cup Dirt Mile (G1).

A seven-month layoff and one more start for Drury produced a poor sixth-place finish in the Kelly’s Landing Downs last June, then the colt was moved to the barn of Hall of Fame trainer Bill Mott, where the winning resumed – the Alydar Stakes, Charles Town Classic (G3), Woodward (G1) before ending his 4-year-old season with a disappointing finish in the BC Classic (G1) at Del Mar.

The Saudi Cup will be Art Collector’s first start since the Breeders’ Cup, but he’s had a string of good works ay Mott’s winter base of Payson Park, including a bullet half-mile in :50 1/5 a week ago, and shipped into King Abdulaziz Racetrack a few days ago in good shape.

There appears to be a lot of speed in this race, so this horse may sit a little off the pace in the early going. He has the pedigree for this distance and is in capable hands and with his last race, coupled with the extended break, may offer good value in any exotics picture.

Notes: Mott also managed the career of Art Collector’s granddam, Bunting (by Private Account), who was also owned by Lunsford … his dam, stakes winner and Grade 1-placed Distorted Legacy, is a multiple stakes winner and last year had a filly from the first crop of Triple Crown winner Justify.