2020 Kentucky Derby Prep Races: The race formerly known as the Santa Catalina Stakes was renamed the Robert B. Lewis Stakes (G3) in 2007 to honor one of the most beloved owners in thoroughbred racing. 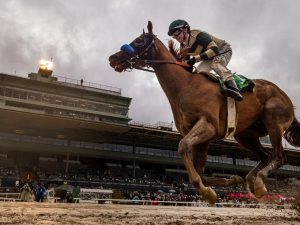 The $100,000 Lewis at 1 1-16 miles is the second main prep on the Southern California road to the Kentucky Derby (G1) on May 2, with several others to follow before the Santa Anita Derby (G1) on April 4, a race that has produced many top Derby contenders.

The familiar green and yellow silks representing Lewis and his wife Beverly — created in homage to the couple’s alma mater, the University of Oregon — were carried by some of the most accomplished runners of the past three decades, including Derby and Preakness winners Silver Charm (1997) and Charismatic (1999), champions Serena’s Song, Orientate and Folklore.

A field of six 3-year-olds – half of whom have reached the winner’s circle with a stakes tally – are entered for Saturday’s Robert B. Lewis at Santa Anita. Up for grabs are Derby points for the first four finishers on a 10-4-2-1 basis.

The Lewis, then the Santa Catalina, was held for the first time in Santa Anita’s inaugural season of 1935. Since then, some pretty familiar names have had their photo taken after reaching the wire in front, including Sham and Ferdinand, recently deceased top sire Pioneerof the Nile and Derby and Preakness winner I’ll Have Another. Other notable winners include champions Declan’s Moon and Artax, as well as Grade 1 winner Dortmund.

A year ago, Mucho Gusto won the Lewis and though he didn’t earn enough points to make the gate for the Kentucky Derby, he won a pair of Grade 3 stakes over the summer and then most recently captured the $3 million Pegasus World Cup (G1) at Gulfstream Park.

The weather outlook for Saturday’s race is calling for unseasonably warm highs in the low-80s. The main track is likely to be fast and the turf course firm as there’s been no rain in the area for weeks and none forecast for several days. The Lewis is the sixth race with a post time of 3 p.m. PT

The field, with jockeys and trainers:

Register now with UsRacing.com, and grab an amazing sign up bonus to get your action on the different 2020 Kentucky Derby Prep Races!