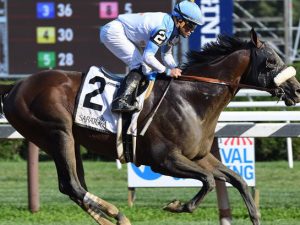 Rarely does a thoroughbred peak at ages 6 and 7, but a combination of injuries, patience and Al Stall’s talent let Tom’s d’Etat reach his potential late.

“He’s had three ankle surgeries, so there were a lot of stops and starts,” Stall said. “That’s very frustrating. It tests your patience when you know you’ve got the real deal, but that’s horse training. There’s an expense associated with all that, but the owners were great.”

Tom’s d’Etat was sidelined from July 2017 until November 2018, and made only seven starts through his 4-year-old season. He’s stayed sound the past two years, winning seven of 12 starts, including four in a row. That streak ended Aug. 1 in the Whitney, where the even-money favorite stumbled badly at the start and did well to finish third. He was surging late, covering his final furlong in less than 12 seconds.

The son of Smart Strike ran second in his only try at 1 1/4 miles, and he has only one Grade 1 victory, so his resume looks weak compared to those of Maximum Security, Tiz the Law, Authentic and Improbable.

“This is rarefied air,” Stall said. “This should be a dynamite horse race, a bunch of top animals in good form.”

Tom’s d’Etat was favored in his last five races, a streak that will end Saturday. He has enough tactical speed to track what shapes up as a hot pace, and he did beat Improbable in April at Oaklawn Park.

Backhanded compliment: He’s the best of all the horses who will be double-digit odds. I won’t play him to win, but I think he’ll beat at least half the field.

Notes: Stall won the 2010 Classic with Blame, who handed the mare Zenyatta her only loss in a 20-race career … G M B Racing was founded by Gayle Marie and Tom Benson, who owned the New Orleans Saints and New Orleans Pelicans. Gayle has run the stable since Tom’s death in 2018 … Many of its horses were named for Tom. Tom’s d’Etat refers to Le Krewe d’Etat, a satirical group in the Mardi Gras parade.