The 25th edition of the Dubai World Cup is set to go on Saturday, with expected favorite Mystic Guide drawing the No. 6 post in field of 14 racing for $12 million in prize money. 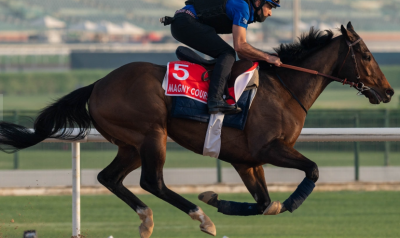 Mystic Guide, owned by Dubai Sheikh Mohammed’s Godolphin racing operation, is one of four U.S.-based horses in an international field that also includes an entry from Uruguay, Ajuste Fiscal.

Mystic Guide comes into the 2,000-meter (about 1 ¼ miles) race at Meydan Racecourse off a victory in the Razorback Handicap (G3) at Oaklawn Park on Feb. 27 in his 4-year-old debut. Luis Saez has the mount.

American Mike Stidham trains Mystic Guide, one of about 16 horses he trains for Godolphin, and says the horse has been flourishing since arriving in Dubai.

“We’re delighted to be here with a horse that belongs here,’’ Stidham said this week. “In his last race, he ran huge in his first start as a 4-year-old, and he seems like he’s been moving forward since.”

The World Cup was canceled last year due to the COVID-19 pandemic, and the eight-race card worth $27 million, is scheduled to take place with a limited amount of people at the track.

While there is no wagering in Dubai, BUSR.com has Mystic Guide as the 5-2 favorite with Military Law, a 6-year-old back at his home base after running sixth in the $20 million Saudi Cup last month, the second choice at 4-1. Jesus’ Team is 9-2, Sleepy Eyes Todd is 9-1, and Title Ready is 18-1.

Sleepy Eyes Todd, fourth in the Pegasus World Cup (G1) and fifth in the Saudi Cup in his last two starts, may be the most well-traveled horse in the field. In the U.S. he’s run in Arkansas, California, Florida, Kentucky, Texas, Louisiana, Minnesota, Nebraska, Oklahoma, and West Virginia. And many different riders have been aboard the 5-year-old with nearly $1.9 million in official earnings.

“He likes to travel,” trainer Miguel Angel Silva said, adding that Alexis Moreno has the mount on Saturday. “He will ride the horse for us on Saturday. [In] nearly every single race, Sleepy Eyes Todd has had a different jockey. We want somebody who knows the horse and how he likes to be ridden. Moreno just won the big race a couple of days ago in Saudi. He’s a great jockey.”

What is the Purse for the Dubai World Cup?

What is the Post Time for the Dubai World Cup?