In the days leading up to the $12 million Dubai World Cup at Meydan Racecourse in Dubai, United Arab Emirates, on March 27, usracing.com is profiling the contenders for the 2,000-meter (about 1 ¼ miles) race. The profiles will be updated with odds, post positions and jockeys following the post-position draw scheduled for Wednesday (March 24).

The country of Uruguay will be represented in the $12 million Dubai World Cup (G1) for first time when Ajuste Fiscal lines up for Saturday’s 25th edition in a field of 14. 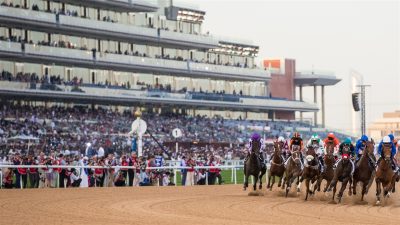 Bred in Uruguay by Haras La Concordia, the 5-year-old bay is trained by Brazilian Antonio Cintra, who has been based at Meydan Racecourse in in Dubai with a five-horse team, including Ajuste Fiscal and El Patriota, scheduled to run in the UAE Derby (G2) on Saturday.

A likely longshot in World Cup, Ajuste Fiscal’s 3-year-old season is worth noting: three straight Group 1 wins at Maronas Racetrack in Montevideo, and an overall career record of 12-6-1-2. He was Uruguay’s 2019 Horse of the Year.

Since arriving in Dubai, he has raced twice, finishing third behind Salute The Soldier and Thegreatcollection, a pair of horses he’ll go against in the World Cup, most recently in the G2 Al Maktoum Challenge Round 2. He was fifth in the Challenger Round 1 on Jan. 21.

Early last week was his final serious training work, and he’s been cantering around the track this week.

“The two horses [Ajuste Fiscal and El Patriota] will continue like this until race day. They both did their last piece of fast work on Tuesday last week and we are very happy with them. Today we went from the 1,200-meter pole, stopped at the 800-meter pole and just walked back.”

Notes: This will be Cintra’s first World Cup runner, but he previously har runners in the UAE Derby and won the 2006 Al Shindagha Sprint with Heart Alone.