Will She or Won’t She? Got Stormy could take on boys in the Fourstardave 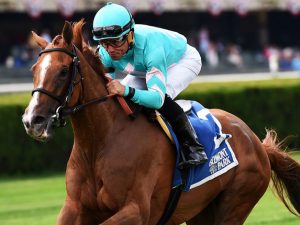 The $500,000 Fourstardave Handicap (G1) looks at first glance like a tall order for the filly Got Stormy.

The one-mile turf feature on Saturday at Saratoga Race Course would be her first race against males. It would also be a quick turnaround following a win last weekend here in the De La Rose Stakes.

It is also a huge class hike, from a restricted stakes to a Grade 1 event.

Many trainers wouldn’t take the chance, but most trainers aren’t Mark Casse, who enjoyed tremendous success campaigning Tepin against the boys.

Tepin was a world-class stakes winner in the U.S. and Europe including a memorable victory against all comers in the 2015 Breeders’ Cup Mile (G1).

By no means are we comparing Got Stormy to Tepin. Not yet, unless the Fourstardave becomes a springboard to bigger and better things down the road.

In delving deeper into the Fourstardave, the spot makes sense for Got Stormy on several levels. Many of the sport’s top turf runners are in Chicago this weekend for Arlington Million Day.

While a competitive race on paper, the Fourstardave offers one of the softer Grade 1 challenges of the Spa season.

And Got Stormy is razor sharp. In her first race since finishing second in the Distaff Turf Mile (G2) on the Kentucky Derby undercard, Got Stormy rolled to a four-length win in the De La Rose, covering the mile in 1:33.15, only 0.02 off the course record.

The weight swing is favorable. After toting 124 pounds in the De La Rose, Got Stormy is low weighted here at 114.

As an added incentive, the Fourstardave is a Breeders’ Cup Challenge Race. The winner secures a berth in the Breeders’ Cup Mile on Nov. 2 at Santa Anita.

So, Mark Casse, why not give it whirl?

“She won it about as easy as a horse can win it,” Casse said of the De La Rose. “We’re going to enter in there and we’re going to take a look at the race.”

It could be a continuation of a family tradition. Got Stormy’s sire, Get Stormy, captured the 2010 Fourstardave.

No filly or mare has won the Fourstardave in the previous 34 runnings.

If Casse reconsiders running the filly in this spot, the day is not completely lost. He hedged his bet by also entering the late-running March to the Arch.

In an interesting twist, Got Stormy isn’t the only distaffer in the field. Chad Brown has three entrants, never a surprise in a turf stake. One of them is Uni, a winner of five consecutive stakes races including last year’s De La Rose and the Matriarch (G 1) last December at Del Mar.

Brown’s other runners are Grade 1 winner Raging Bull and Made You Look.

The Saratoga Special is a crap shoot at 6 ½ furlongs. The eight entered runners are all making their stakes debuts. Seven were winners last time out.

Let’s go with the hot hand with babies at the Spa. That takes you to trainer Jeremiah Englehart and Tuggle, a very green Point of Entry colt who debuted with a 1 ¾ length win in the slop at Belmont Park on June 21.

Englehart has been phenomenal with juveniles this meet, 6-3-2 from only 14 starters through Wednesday

Overall Englehart is hanging in there with the big boys. Brown leads the training pack with 19 wins. Englehart has eight, good for a three-way tie for second with Todd Pletcher and Bill Mott.

King Snake has been cross-entered here and in the Prairie Meadows Juvenile Stakes on Friday.