I have highlighted some outrageous horseplayer behavior in the first two parts of this series, available here: 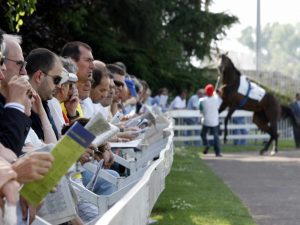 But there are always more hilarious examples of horseplayers in action to be found on the internet!

Plus, with the global coronavirus (COVID-19) continuing to spread, and the racing world almost completely on hold, a little levity may be a good thing.

I think back to my days hanging around on the second floor of the old Meadowlands grandstand. I’d usually have the same track buddy with me, but one day I brought another friend for the ride.

He was savvier at craps than horse racing and this would be his introduction into the underworld of degenerates and other characters that you find at every track. We’ll change his name to protect his innocence and call him Don Tot.

Don Tot hadn’t been to the track often, let alone arriving well before the live racing to do some simulcasting. I had a couple of small plays I liked at Golden Gate. Don Tot was happy to try to get in on some of the action.

My horse, the two in the sixth race, was the favorite in a five horse field. While staring at a paltry line of 1-1, which was still better than my fair odds line of 3-5, Don Tot asked who else I liked in that race. I pointed to the one as the only other contender I thought had a remote shot.

As I joked about the field size of California races with Del, the only other regular hanging around the simulcast monitors that afternoon, Don Tot raced up to the row of empty teller windows like he had the cure for cancer. My horse held his odds at 1-1 which made me happy while the one horse settled in at 7-5.

The race went exactly as planned, the two broke well, made the lead, and took the field wire to wire winning by at least 10 lengths. Only Don Tot stayed glued to the monitors. Then it happened. With an ear drum rupturing “Woo!” and some jumping up and down and flailing about, I thought my friend might be having a seizure.

Del asked “Whaddaya think he just hit? Da superfecta, or what?” I shrugged and shook my head.

“Oh yeah, $3.20, oh yeah!!!” Don Tot had netted $1.20 after playing his $1 exacta box for $2. While Del rolled his eyes, Don Tot continued on exclaiming “oh yeah!” like the Kool-Aid Man had just won the Mega Millions and Publisher’s Clearing House Sweepstakes! We let him have his moment and I knew the rest of the night would be nothing less than entertaining.

(Note that like many horseplayers, some of these videos contain some vulgar language!)

Somewhere between performing “I’m a Little Teapot” and riding the invisible horse is this guy in an overseas betting shop. While his self-flagellation tapers off the rhythmic repetition takes over as he urges his horse to the front. This time it works for him. What is the most amazing is that his backpack didn’t slip at all or get in the way!

It is never too early to get kids into the sport and teach them the quirky reactions that work for you at the track. I often have the same reaction to turf races at Saratoga since they can offer up some amazing finishes. I guess the question remains, who did this kid have in his exacta?

Judging from the varsity jacket this gentleman still lives in his high school baseball and football days. This video is chock with great one liners and other actions. “Get up there and be a racehorse” is my favorite line from his monologue followed by the backhand toss of the program at the monitor before the hat toss to end the tirade. This video has it all including begging, pleading, and a last ditch effort of whipping the horse home. While ending up on the wrong end of that double, he still has his high school glory days to hang on to!

Omg! I just realized you guys didn’t get to see this from the start. You missed some classic quotes. pic.twitter.com/jedhX0oZ3Q

It doesn’t matter where you are in the world or what language people speak, you will find entertaining horseplayers anywhere you go. I can’t make out what track, race, or horse this guy is cheering for based on the video, but one thing is for sure, this one went his way!

From The Comforts of Home

Nothing beats watching and playing the races from home. The beer selection is usually better (and cheaper) and no one has to endure watching your best moves. Take this gentleman for example. I can’t tell if he thinks he is riding the horse or doing some odd form of calisthenics. I think he may have even scared that dog by the end of the video!

Once again, for those of us that remain more composed at the race track, it is always fun to come for the live racing and stay for the show! What other great entertaining horseplayer moments have you witnessed at the track or your favorite OTB?

If you enjoyed the third release from our Horseplayers Go Bad Series, check out other amazing articles at our news section!