What A Long, Strange Trip It’s Been

You need a journey in the Wayback Machine — to the eras of Dancer’s Image and Spectacular Bid — to unearth a 3-year-old immersed in so much controversy.

The former $16,000 claimer became the talk of racing, and the sport’s world in general, with his disqualification in the Kentucky Derby (G1).

He was unquestionably the best horse on that sloppy afternoon at Churchill Downs. The stewards found fault, and placed him 17th for interference.

The lawsuits by owners Gary and Mary West challenging the disqualification are still in the judicial process.

That Maximum Security loves to win has never been in dispute. The colt trained by Jason Servis is 6-for-8, including Grade 1 wins in the Florida Derby and the Haskell Invitational.

Most recently, he returned from a three-month layoff to beat older horses at Belmont Park in the Bold Ruler Handicap (G3).

The Cigar Mile will be a stern test, thanks to the presence of another 3-year-old: Spun to Run.

The pride of Parx, Spun to Run crushed the competition in the Breeders’ Cup Dirt Mile (G1) for trainer Juan Carlos Guerrero.

They have similar front-running styles, and will start side-by-side. Maximum Security has post 5, one slot inside of Spun to Run.

While I believe Maximum Security is king of this crop of 3-year-olds — and will mark my Eclipse ballot accordingly — Spun to Run should give him all he can handle.

They met once before, in the Haskell with Maximum Security scoring the win on his home track on a beastly hot July evening.

Spun to Run had some traffic trouble in the 1 1/8-mile Haskell and settled for third. His edge in the rematch could be the distance. Spun to Run is 3-for-3 at a flat mile. 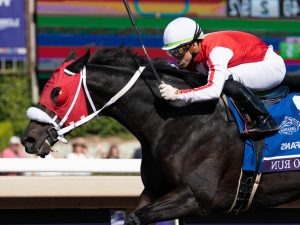 Blinkers have helped. Spun to Run wore them for the first time in the Haskell and is 3-0-1 in five starts since adding the hood. They helped him focus in his dominant Breeders’ Cup victory.

“With his blinkers on, no matter how fast he is going, he’s in his own little world,” Guerrero said.

Among the older runners in the 11-horse field, Whitmore looks most capable if he handles the stretch out. One of the top sprinters in the country, Whitmore ran third last month behind Mitole and Shancelot — very fast company indeed — in the Breeders’ Cup Sprint (G1) at six furlongs.

“Until we do it, you don’t know,” trainer Ron Moquett said of the added distance. “We’re hoping it will set up for him.”

The Cigar Mile concludes the 10-race card, and the Empire 6 pool. There will be a mandatory payout of the 20-cent wager that requires the bettor to select the last six winners on a card. The bet carries over when there is not a single winning ticket.

The last major 2-year-old stakes of the New York season are also in the spotlight and might shed some light on next year’s stars.

The Remsen (G2) offers 10 qualifying points to the winner on the Road to the Kentucky Derby.

Trainer Shug McGaughey, a Hall of Famer and a four-time Remsen winner, sends out Amends for his long-time client, the Phipps Stable. The homebred son of Uncle Mo takes the class leap from a 4 ¼-length maiden win to a graded stakes.

On the distaff side, the winner of the Demoiselle (G2) earns 10 points toward a berth in the Kentucky Oaks (G1).

Critical Value, the easy winner of her last two, attempts to prove she is more than just a pretty face among the New York breds in her first try against open company.

Older fillies are featured in the Go For Wand (G3) where Spiced Perfection gets considerable class relief following a fourth-place finish in the Breeders’ Cup Filly & Mare Sprint (G1).