Wesley Ward got his mojo back Saturday in a race he owns. In his last chance to avoid a shutout week at Royal Ascot, Ward teamed with Frankie Dettori to take the Group 2 Queen Mary Stakes with 2-year-old filly Campanelle.

Dettori stalked in third on the 5-1 shot before taking the lead inside the final furlong and edging away from Sacred by three-quarters of a length. Campanelle’s stablemate Royal Approval finished 17th of 18. 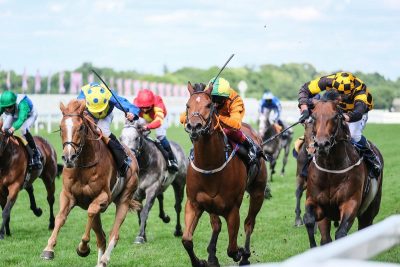 “I had high hopes and expectations for this filly,” Ward said from Kentucky. “She had to ship from Miami through Amsterdam to Newmarket, and for her to come through proves what a good filly she is.”

Campanelle launched a big day for the 49-year-old Dettori, whose three wins gave him 73 at the Royal meeting.

“I had plenty of horse left,” he said. “She’s very sensible, she’s not a tearaway. When I asked her to quicken, she quickened really well. When I ride for Wesley, he leaves it up to me. His horses are always well schooled and know their job.”

The 2-year-old Irish-bred also kicked off a monumental day for her sire, Kodiac. In the next race, 160-1 shot Nando Parrado became the longest-priced winner in the history of Royal Ascot, which started in 1711. Nando Parrado paid $234.20 for a $2 bet. Hello Youmzain ($11.20) also scored for Kodiac in the 6-furlong, Group 1 Diamond Jubilee Stakes.

“The owners are big supporters of mine, they also had Lady Aurelia with me,” Ward said. “Frankie rode such a brilliant race. It’s great. Words don’t describe how I feel right now. It means more given that this is not a normal year.”

COVID-19 restrictions kept Ward away from Royal Ascot for the first time since 2008, the year before his first win there. American Blake Heap served as his assistant trainer this week, when Ward went 1-for-7 and avoided his first zero since 2012.

It was the third time Dettori has teamed with Ward for a Royal Ascot victory. A year ago, Dettori denied his friend in a photo finish.

Ward finished second twice Thursday and was eighth, ninth and 10th with his first three runners. “We’ve had some near misses this year,” he said, “so we needed that.”

Dettori was happy he could provide it for him.

“I’m pleased,” he said. “Barbara is a big supporter of mine, and so is Wesley. I wish they were here to celebrate with me, but we will get together very soon.”