Come gather round children and you will hear

The tale of the coupled entry horseplayers once held so dear

In the not too distant past, coupled entries were commonplace. If there was a connective thread among horses in the same race, such as common ownership or the same trainer, they ran as an entry. It was a hedge for the bettor. Who didn’t want two, or even three or more horses, for the price of one?

Things have certainly changed. Declining foal crops, fewer owners investing in horses, and the growth of exotic wagers like the superfecta and the Super Hi-5 fueled the demand for additional betting interests. The coupled entry fell victim.

The uncoupling of entries hits home once again as we focus on our friends to the north at Woodbine. 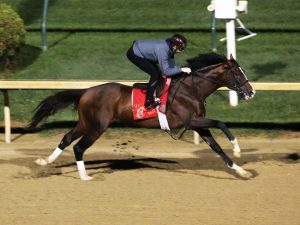 War of Will – Courtesy of Churchill Downs/Coady Photography.

The $1 million Woodbine Mile (G1) on Saturday is a turf stakes that attracted a field of eight including a trio from trainer Mark Casse: 2019 Preakness (G1) winner War of Will (the 2-1 favorite), March to the Arch (the 5-2 second choice) and Olympic Runner (15-1).

Both War of Will and Olympic Runner are owned by Gary Barber. In the “good old days,” all three would be bundled into one entry.

The reference to “good old days” conveys the empty feeling a player gets when beaten by the “wrong” part of what used to be an entry.

It sprung up last weekend at Woodbine in the $1 million Queen’s Plate, the first jewel of the Canadian Triple Crown.

Trainer Josie Carroll entered three horses and danged if her longest shots (Mighty Heart, the winner at 13-1 followed by Belichick at 26-1) didn’t run 1-2 while Curlin’s Voyage, the 5-2 favorite, was fifth.

This is not a suggestion of chicanery but the reality of racing today. When you toss away tickets because your horse’s stablemate beats you, it often leads to head scratching.

Back to the Woodbine Mile, a Breeders’ Cup “Win and You’re In” challenge race. The winner is entitled to a fees-paid berth in the $2 million Mile (G1) on Nov. 7 at Keeneland.

War of Will, recast as a turf horse, leads the Casse trio. The colt had an eventful run through last year’s Triple Crown. After a knockabout trip in the Kentucky Derby (G1), War of Will rebounded to win the Preakness before finishing well up the track in the Belmont Stakes (G1).

He concluded the campaign with a ninth-place finish in the Breeders’ Cup Classic (G1). His two races this year have both been one-mile Grade 1 grass stakes and he is getting the hang of running on the lawn.

War of Will ran fifth in the Shoemaker at Santa Anita before squeezing out a nose win in the Maker’s Mark at Keeneland. That was his first victory since the Preakness, ending a five-race losing streak.

“He’s coming off that nice win in the Maker’s Mark Mile and he’s trained as good as I’ve seen him train since that race,” said Casse, a two-time Woodbine Mile winner with Tepin (2016) and World Approval (2017). “We’re expecting him to run well.”

Rafael Hernandez has the mount.

March to the Arch tuned up for this spot with a rallying victory in Woodbine’s King Edward Stakes (G2) while Casse’s third entrant Olympic Runner switches back to the turf following a pair of second-place Woodbine stakes finishes over the Tapeta all-weather track.

Since our theme is uncoupled entries, there is another unhooked duo in the Woodbine Mile. Trainer Barbara Minshall sends out the pair of Admiralty Pier (10-1) and Armistice Day (20-1).

That leaves three runners unaccompanied by stablemates, and every member of that trio is a legitimate contender, starting with Starship Jubilee (4-1) for trainer Kevin Attard.

Canada’s 2019 Horse of the Year, Starship Jubilee, a 7-year-old mare, notched Woodbine’s E.P. Taylor Stakes (G1) among her three victories last year. She hasn’t missed a beat in 2020, with three stakes wins in four starts. The lone defeat came most recently in the Diana (G1) at Saratoga.

It wouldn’t be a Grade 1 grass stakes without Chad Brown in the mix and he sends out Value Proposition (6-1), the beaten favorite last time out in the Poker (G3) at Belmont Park.

Last and certainly not least is Shirl’s Speight (8-1), the youngest runner in the race at 3 who is 2-for-2 for trainer Roger Attfield.