Triple Crown winner American Pharoah and trainer Todd Pletcher were elected to the National Museum of Racing’s Hall of Fame on Wednesday — both in their first year of eligibility.

American Pharoah became the first horse in 37 years to win the coveted Triple Crown, sweeping the Kentucky Derby, Preakness and Belmont Stakes in 2015, with his turn for home in the Belmont stretch met with a wall of sound from 90,000 fans cheering him on to victory.

Pletcher, 53, is among the greatest trainers in history. His record includes more than 5,100 victories and more than $405 million in purse earnings since 1966.

See Also: A Handful Of Racing Myths To Improve Your Wagering

“I’m really humbled to be elected to the Hall of Fame. It’s an incredible honor and something that doesn’t happen without having great support around you,” said Pletcher. “I’ve been extremely fortunate to have a great team to work with and my family has been there every step of the way.”

Also elected to the Hall was steeplechase trainer Jack Fisher, a dominant force in the sport over the past 20 years with 13 training titles. 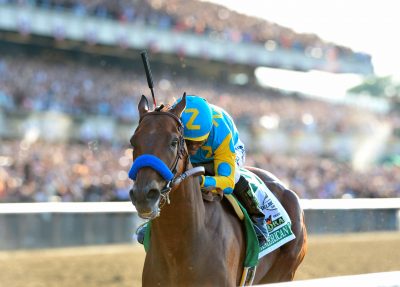 A bay colt bred in Kentucky by owner Ahmed Zayat’s Zayat Stables and trained by Hall of Famer Bob Baffert, American Pharoah won nine of 11 career starts, earned $8,650,300, and capped off his brief but brilliant career with a dominating win in the Breeders’ Cup Classic at Keeneland.

“He’s certainly among the all-time greats. I don’t think there is any question about that,” said Baffert, a seven-time Derby winner who also won another Triple Crown with Justify in 2018. “He did everything so effortlessly and with such class. The way he moved; his mechanics were absolutely flawless.”

After running out of the money in his first career race in August 2014, he went on a historic run through his generation, winning the Del Mar Futurity and the FrontRunner in California, then overpowering the field in the Rebel over a sloppy Oaklawn Park surface. He romped by eight lengths in the Arkansas Derby, and then edged Firing Line by a length to win the Derby.

Two weeks later, he won the Preakness on a day that saw frightening lightning and thunderstorm drench the track just before the start. Three weeks later, he dusted off the Belmont field by 5 ½ lengths and the celebration was on – racing’s 12th Triple Crown winner and first since Affirmed in 1978.

American Pharoah was upset by Keen Ice in the Travers at Saratoga over the summer but returned for one more race and won the BC Classic. He was voted Horse of the Year and 3-year-old male champion.

“He also has such a wonderful personality. Pharoah is really a sweet and kind horse, and he loves humans,’’ said Baffert. “I went and saw him the other day (at Coolmore’s Ashford Stud) and he looks as good as he’s ever looked, if not better. Winning the Triple Crown with American Pharoah was the greatest sports moment of my life. It was so emotional and such a terrific thing for racing. He deserves all the accolades he gets.”

The son of trainer J.J. Pletcher and an assistant to Hall of Famer D. Wayne Lukas, Pletcher he ranks fourth in Breeders’ Cup earnings with more than $21.5 million and fifth in wins with 11. He has won more than 700 graded stakes races, among them four or more wins in the Beldame, Champagne, Coaching Club American Oaks, Florida Derby, Spinaway, Spinster and Wood Memorial.

“There have been so many great owners who have trusted me with their horses and those horses have meant everything to me,’’ said Pletcher. “Along with my family and team, I had amazing opportunities to learn from the likes of Wayne and Jeff Lukas and working winters alongside Kiaran McLaughlin, who taught me a lot about horses and also how to work with owners and communication skills. It really was a stroke of good fortune to come up with people like that around me.

“Training horses is all I ever wanted to do. I remember being 11 or 12 and telling my mom I wanted to train, and she said it was wonderful. From that point on with her endorsement I never thought of doing anything else.” 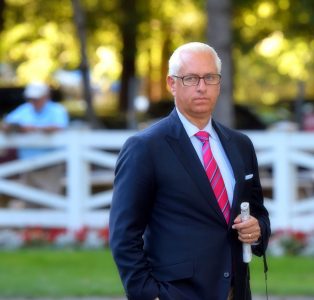 The induction ceremony is scheduled for Aug. 6 at the Fasig-Tipton Sales Pavilion at Saratoga Springs, New York. The ceremony also will include the induction of the class of 2020 – horses Wise Dan and Tom Bowling, trainer Mark Casse, jockey Darrel McHargue and three in the pillars of the Turf category, Alice Headley Chandler, Keene Dangerfield, Jr., and George Widener, Jr.

Last year’s induction program was canceled due to the COVID-19 pandemic.