The Farrell Report: Pay Attention To Weyburn In Jim Dandy

Jimmy Jerkens is a New York guy, through and through.

Like his late Hall of Fame father Allen Jerkens, his heart and soul are in New York racing, especially Saratoga.

So, it comes as no surprise that Weyburn is one of the contenders for Saturday’s Jim Dandy Stakes (G2) for 3-year-olds at Saratoga on Saturday. The Jim Dandy is the Spa’s prep for the big one: the Travers (G1) on Aug. 28. 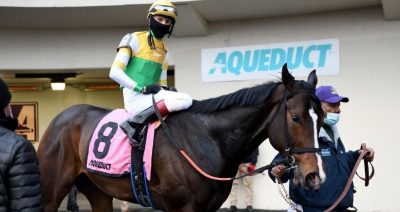 You might recall Weyburn as the 46-1 upset winner of Aqueduct’s Gotham Stakes (G3) back in March.

Most recently, Weyburn threw a scare into Kentucky Derby (G1) runner-up Mandaloun in the Pegasus Stakes at Monmouth Park on June 13. Weyburn closed resolutely in deep stretch to miss by only a neck.

The Pegasus was Monmouth’s prep for the Haskell (G1) on July 17, a contentious $1 million affair in which Hot Rod Charlie was disqualified after finishing first and Mandaloun was awarded the victory.

There was little doubt that Jerkens would decline a return trip to the Jersey Shore for a Haskell rematch. Not with Saratoga on the horizon.

Weyburn turned in a sharp work last Saturday at Saratoga, 5 furlongs in 59.48 seconds while galloping away from his workmate.

The Ontario-bred son of Pioneer of the Nile will have to be on his toes in a tough Jim Dandy that will likely attract Belmont Stakes (G1) winner Essential Quality and Keepmeinmind, a late-running third last time out in the Ohio Derby (G3).

This being Saratoga, it wouldn’t be a Saturday card without multiple graded stakes. The Jim Dandy will be supported by the Bowling Green (G2) on the turf and the Alfred G. Vanderbilt Handicap (G1) at 6 furlongs.

On the road to Del Mar: It’s Bing Crosby day

Sprinters are also in the spotlight Saturday at Del Mar in the Bing Crosby (G1).

The Crosby is a Breeders’ Cup “Win and You’re In” qualifier for the BC Sprint (G1) at Del Mar on Nov. 6. With the Cup in their backyard this year, the connections of most top West Coast sprinters tossed their names onto the Crosby nomination list.

The most interesting name on the roster is Gamine, the Breeders’ Cup Filly & Mare Sprint (G1) winner. Bob Baffert, her trainer, indicated he would rather avoid sending the four-time Grade 1 winner against the boys. She might turn up instead in the Clement L. Hirsch (G1) the following day at Del Mar.

Back to the Crosby, Collusion Illusion, last year’s winner, is expected back to defend his title in his season debut. 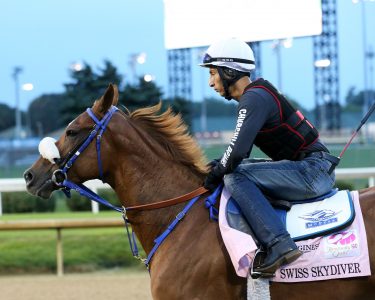 Trainer Ken McPeak hasn’t had an enjoyable stay at Saratoga as an outbreak of Equine Herpesvirus-1 in his barn put all his horses into quarantine. That scrambled plans to run Swiss Skydiver in last weekend’s Shuvee (G3).

Going back to the drawing board, McPeek is now looking to run last year’s Preakness (G1) winner in the Whitney (G1) on Aug. 7. The filly would face a tough bunch of older male runners, including Maxfield.

“Throughout the time I’ve had her, she’s gone from a girl to a woman. She’s as attractive as ever and maybe more so now,” McPeek said. “From two to three to four, you never know how they’re going to evolve but she’s doing everything right. She’s bigger in her shoulder and her hip at this stage. She’s always been an extremely intelligent filly. She’s a happy horse and still loves her job.”

The last filly to win the Whitney was Hall of Famer Personal Ensign in 1988.

Harness Update: Manchego cracks $3 million in the Spirit of Massachusetts

A $3 million bankroll is quite a feat for a horse of any breed. So, we send our congratulations to trainer Nancy Takter and her team for guiding the great trotting mare Manchego to that plateau with a pacesetting victory Sunday at Plainridge Raceway.

The long-striding 6-year-old mare remains in fine form, trotting the mile in 1:50, only two-fifths off her own track record. The win was her 38th in 62 career starts.