As expected, the Arkansas Derby was a duel into the stretch between front-runner Caddo River, the 3-1 second choice, and Concert Tour, the 3-10 favorite. Then the match race fell apart when along came 12-1 shot Super Stock. 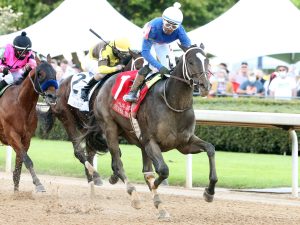 Jr., saved ground along the rail down the backstretch, and his colt made a wide move into the stretch. Inside the eighth pole, Super Stock, on the outside, surged past Caddo River, who held second, and Concert Tour as he cruised to a 2 1/2-length victory in the $1 million, Grade 1 stakes at Oaklawn Park.

Hall of Fame trainer Steve Asmussen is second all-time with 9,279 victories, but he’s 0-for-21 in the race he wants to win most. Super Stock will give him a chance to end that record streak, and Asmussen is thrilled about his family horse. His son Keith rode Super Stock last summer to his only win before Saturday. Asmussen’s father and mentor, patriarch Keith Asmussen, co-owns him with Erv Woolsey.

“It’s a truly blessed moment for the connections and with what this horse has meant to the family,” Steve Asmussen said. “We had confidence going into the race. He’s been touting himself and just been getting better and better.”

It was his first loss in four starts for six-time Kentucky Derby winner Bob Baffert, and it ensured that 5-for-5 Blue Grass Stakes hero Essential Quality will remain the Derby favorite. Concert Tour finished a head behind Caddo River, whom he beat by 6 3/4 lengths last month in Oaklawn’s Rebel Stakes. Caddo River earned 40 Derby points Saturday, and Concert Tour added 20.

The updated points standings of the top 25 horses still being aimed for the Derby, courtesy of Churchill Downs:

The Derby field is limited to 20, but there will be more defections before the May 1 classic.

The pace was hot, so Brian Hernandez waited on the sloppy Keeneland backstretch. On the far turn, Hernandez knew it was time to go, and 18-1 shot King Fury made his move.

The son of Curlin took over entering the stretch, splitting horses in the two-path before drawing away to a 2 3/4-length victory over 20-1 Unbridled Honor in the Grade 3 Lexington Stakes in Lexington, Kentucky. King Fury ran 1 1/16 miles in 1:43.50 and paid $38.40 for his third win in six starts for trainer Ken McPeek. He earned 20 qualifying points for the Kentucky Derby, but it seems highly unlikely that he will get into the field.

That’s all right with McPeek.

“I don’t know if he will get into the Derby, but I think he’d be able to handle the mile and a quarter,” McPeek said. “The Preakness is out there, too, so it’ll be one or the other.”

King Fury, in his first race since Nov. 28, dominated at a track where he finished seventh and eighth last fall. Unlike those days, everything went his way on Saturday.

Hernandez kept him far behind fifth-finisher Noble Reflection’s fast fractions (22.39 for a quarter mile, 45.87 for a half). “They were going fast,” the Cajun jockey said. “Midway down the backside, he started traveling so good that I knew they were in trouble up front, and I was able to pick my way through the speed horses who were backing up.”

The big disappointment was 2-1 co-favorite Proxy, who finished six lengths behind in fourth. Proxy has 36 Derby points, but before the race, trainer Michael Stidham said his status for the race was dependent upon his performance in the Lexington.

Swiftsure, also at 2-1, was seventh of nine, and Baffert’s Bezos was last, more than 42 lengths back.