The $800,000 Sunland Derby (GIII) is the youngest of all the second-level, 50-point Kentucky Derby (GI) preps and while a winner of this race has yet to wear the roses in Louisville — Mine That Bird finished fourth in the 2009 edition before going on to make Derby history as the second-longest-priced winner ever — a mark he still owns today. 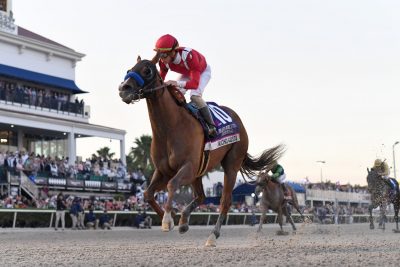 This year, the Sunland Derby will be run for the 15th time (it wasn’t contested in 2016 due to a local outbreak of equine herpesvirus) and a field of 10 has been set to race the nine furlongs, including several locals and shippers from California and the Southeast.

Two years ago, Calumet Farm’s Hence was the winner in New Mexico before finishing 11th in the Run for the Roses and then winning the Iowa Derby (GIII). Also in 2017’s edition was fan favorite Patch, a one-eyed runner who caught the public’s imagination, and the ill-fated multiple stakes winner Irap. And aside from Firing Line, who won here before finishing second to Triple Crown winner American Pharoah in the 2015 Kentucky Derby, perhaps the most well-known runner to come out of the race is Thor’s Echo, who won the Sunland Derby in 2003 before continuing his career mostly around one turn, winning the 2006 Breeders’ Cup Sprint (GI) and the Eclipse Award as that year’s top sprinter.

A year ago, Runaway Ghost took home the win for local connections before a shin injury sent him to the sidelines for nearly a year.

Hall of Famer Bob Baffert has saddled three Sunland Derby winners so far — Wanna Runner, 2006; Governor Charlie, 2013; and Chitu 2014 — and Martin Garcia and Victor Espinoza have each ridden two winners, though neither will be in New Mexico for this race this year.

The weather in Sunland Park, New Mexoco, on Sunday is expected to be mostly cloudy but warm, with highs in the low- to mid-70s. Rain isn’t in the forecast so expect a fast track. The Sunland Derby is the day’s 11th race with a post time of 5:30 p.m. MT.

Mucho Gusto – The Robert Lewis Stakes (GII) winner is another transplant from the chaos that has been the Southern California racing scene and, with a win here added to the 14 points he has, he will likely assure himself shim in the Derby gate. Baffert sends regular rider Joe Talamo in search of a first Sunland Derby win.

Anothertwistafate – is riding a three-race win streak — maiden, allowance and the Golden Gate Derby — by a combined 16 lengths, all on synthetic. He returns to the dirt for the first time since his six-furlong debut at Santa Anita and moves up in class, but he has good numbers and this $360,000 son of the late Scat Daddy has the pedigree for the stretchout. Trainer Blaine Wright and jockey Juan Hernandez make their Sunland Derby debuts.

Hustle Up – This New Mexico-bred son of Abstraction likes to win, capturing eight local stakes over the past year. He makes his 11th start looking for his eighth win for trainer and co-breeder Todd Fincher, who won this race a year ago with Runaway Ghost. Jockey Shane Laviolette, who has won more than 2,300 races in his career, returns off the Mine That Bird Derby win looking for his first Sunland Derby.

Wicked Indeed – Fourth in the LeComte Stakes (GIII) at Fair Grounds, Hall of Famer Steve Asmussen shipped this Winchell Thoroughbreds homebred son of Tapit to finish second in the Mine That Bird Derby a month ago as the 4-5 favorite. The added distance will no doubt help. Asmussen sent out Hence to win this race in 2017 and Daddy Nose Best in 2012, while jockey Luis Contreras is so far winless.

Cutting Humor – was a well-beaten seventh as the favorite in the Southwest Stakes (GIII) last month, so Todd Pletcher — who hasn’t won this race yet in his career — sends this Starlight Racing color-bearer here for a shot at Derby points. The son of First Samurai brings his jockey, Hall of Famer John Velazquez looking for an initial Sunland Derby victory, which seems like a rousing endorsement of his opinion of this colt.

Walker Stalker – was third in the Mine That Bird Derby for local trainer Jose Gonzalez. The New Mexico-bred son of Stroll steps up in class, but his last wasn’t awful. Like this black gelding’s trainer, jockey Alejandro Medellin has yet to win this race.

Passamonte Man – This Sam Britt-owned and lightly raced New York-bred is a long way from home, and was a decent fourth in the Mine That Bird Derby last out. The son of Strong Mandate is trained by Joel Marr and will be ridden by Ken Tohill, looking for their first victory here.

Collusionist – This Colorado-bred son of EZ Effort (by In Excess) broke his maiden in a little stakes at Arapahoe Park last summer and has had trouble in stakes since. His connections, including trainer O. A. Martinez Jr. and jockey Alfredo Juarez Jr., take a fist stab at the Sunland Derby off a well-beaten sixth in the Mine That Bird Derby.

Diamond Blitz – The Desormeaux brothers, Keith and Kent, invade with maiden claiming winner Diamond Blitz in his stakes debut off a couple of fourth-place finishes in allowance company. Neither have won this race, but both are always up for a challenge in sending seemingly overmatched horses into big races and being successful.

Eye Cloud – This $5,500 Kentucky-bred son of Point of Entry has been all over, from Louisiana to Kentucky and now New Mexico. He hasn’t won in three starts this year in allowance and stakes company around two turns and jumps up in class this year. Trainer Tracy Norris and jockey Isaias Enriquez team up looking for a first win here.