Starship Jubilee: A Lady and a Champ Wins Woodbine Mile

In Europe, top-flight fillies and mares take on the fellas on a regular basis (Enable, Magical of late). Not so in North America, where there are more than enough races to keep the boys and girls separated most of the time.

So when it does happen, it’s probably a good idea to pay attention — and invest a few dollars just for fun.

Other times, it’s close: Midnight Bisou ran a closing second to Maximum Security in the $10 million Saudi Cup in February, and Swiss Skydiver was a gallant second to Art Collector in the Blue Grass (G2) in July.

On Saturday, at Woodbine outside Toronto, the 7-year-old mare Starship Jubilees took charge in the stretch and beat males young and old in the $1 million Woodbine Mile (G1). 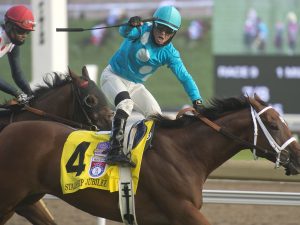 The one-length win over March to the Arch (2019 Preakness winner War of Will was third) gives Starship Jubilee an all-fees paid berth in the Breeders’ Cup Mile (G1) at Keeneland on Nov. 7.

“This mare doesn’t get the respect she deserves,’’ he continued. “She’s a winner of 18 or 19 races out of 38 starts, I was really disappointed to see her at 6-1 on the board. Just kind of forgotten about. Time after time, she comes up and proves that she’s a top horse in North America.”

Owned by Blue Heaven Farm, Florida-bred Starship Jubilee ($13.50 for a $2 win bet) came into the race off a rare off the board finish (fourth) in the 1 1/8-mile Diana (G1) at Saratoga after winning 6-of-7 dating back to Sept. 14, 2019. A daughter of Indy Wind, Starship Jubilee is now a two-time Grade 1 winner, having won the E.P. Taylor Stakes at Woodbine for Attard’s first G1 win. She had it all together again at Woodbine under jockey Justin Stein.

Racing comfortably in mid-pack in the field of eight, Starship Jubilee (the fourth betting choice at nearly 6-1) moved past 2-1 favorite War of Will and Admiralty Pier in the stretch, then took command with a furlong to go.

“Sitting inside the three-eighths pole, around the 5/16ths pole I had tons, and I waited for a chance to tip her out and ask her to run,” Stein said when asked when he thought he would be a winner. “She’s so honest and wants to win more than anybody else out there. I watched her replays … she’s just gritty. She just waited for her cue and took off like a scalded cat. She was gone.”

Winning time for the mile over firm turf was 1:32,06. It was the third time a filly or mare has won the Woodbine Mile in 24 runnings.

As for the BC Mile, where a female or two could possibly join Starship Jubilee in the field, Attard said: “I’m just going to enjoy the moment right now, but it’s obviously a special feeling to know that this race has produced so many horses that have gone on to win the Breeders’ Cup. So, I’m really ecstatic right now and that’s somewhere we’ve been aiming to go all year long. This is just one step closer.”