She’s only run twice, but already Taraz is being compared to some of the best 3-year-olds of her gender and generation.

Even better, the Juddmonte Farms homebred has so impressed her connections that they’ve nominated her to the Triple Crown to compete against the boys.

But Brad Cox, the trainer of 2-year-old filly champion British Idiom, 2019 double Eclipse Award winner Covfefe (3-year-old filly, female sprinter) and 2018 champion 3-year-old filly Monomoy Girl, is tapping the breaks a bit on his newest star. Despite Taraz’ blazing speed and obvious talent that has resulted in a combined winning margin of 18 ½ lengths, plus her imposing physical presence and athleticism, her career will be managed carefully.

First up is Saturday’s $150,000 Martha Washington Stakes at Oaklawn, where Taraz was installed as the even-money favorite in the field of five and where she can pick up Kentucky Oaks (G1) qualifying points (10-4-2-1) available to the top four finishers.

“It’s one step at a time, obviously. It’s the Martha Washington and then go from there,” said Cox, who has also entered stablemate Shedaresthedevil, who makes her first start for him since being transferred from the care of Simon Callaghan last year.

Though Taraz has been mentioned in the same sentence with Monomoy Girl and some have even dared to whisper the name of 2009 Horse of the Year Rachel Alexandra (both Oaks winners), she has yet to navigate two turns. That changes in Saturday’s race when Taraz stretches out to the one-mile distance from the six furlongs of her last win in the Letellier Memorial Stakes, which she took by 11 ½ lengths in front-running style on a sloppy track in New Orleans on Dec. 19th.

Nonetheless, Taraz’ breeding gives every indication that the mile is well within her reach, with plenty more to spare. She is by Into Mischief, the 2019 leading general sire (and sire of Covfefe), and is a daughter of Silk Route by the recently deceased and aptly named Empire Maker. Silk Route won twice in her career, but both of those wins were at 1 1/8 miles.

Taraz is a third-generation Juddmonte filly and the fact that her owner/breeder is so high on her speaks volumes considering the extraordinary success of the international operation and the multiple champions it has produced and campaigned.

Taraz arrived at the Hot Springs, Arkansas track from Cox’s Fair Grounds division this past Tuesday and the massive filly turned heads when she stretched her legs with a 1 ½-mile gallop over the track for the first time the following morning. Her imposing presence did nothing to tamp down the talk of her running in the Kentucky Derby (G1) rather than the Oaks on the first weekend in May at Churchill Downs.

“She’s special,” said Cox, who was pleased that assistant Jorgito Abrego reported Taraz took right to the Oaklawn strip. “Everything has to line up, everything has to go right. The way she trains, she gives you that amount of confidence to think about things like that, bottom line.”

Taraz’ regular rider Florent Geroux will be at the controls when they leave the gate from post 3 while stablemate Shedaresthedevil, a daughter of Daredevil and a $280,000 yearling, will be just to her outside under Joe Talamo. The Steve Asmussen-trained Princesinha Julia and Ricardo Santana, Jr. drew post 5 and the Three Chimneys Farm homebred is the 5-2 second choice on the morning line. 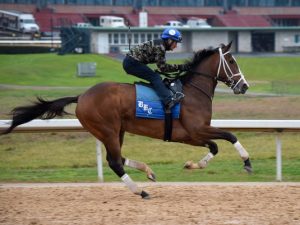 Stakes winner Princesinha Julia will be attractive to bettors who find Taraz, likely to be odds-on by post time, too chalky. She, too, is a granddaughter of Empire Maker through Pioneerof theNile, who sired 2015 Triple Crown winner American Pharoah, and her dam is multiple Grade 1 winner Love and Pride. She comes in to the Martha Washington with three consecutive wins at one mile at Remington Park but despite being conditioned by a Hall of Famer and the 10-time Oaklawn leading trainer, her speed figures are nowhere near those of Taraz.

The Martha Washington is the first in Oaklawn’s three-race series for sophomore fillies offering Kentucky Oaks qualifying points and the series continues with the Honeybee (G3) on March 7 and the Fantasy (G3) on April 10. Even though there are Oaks points to be had Saturday, the presence of Taraz scared away many from the starting gate. High On Gin, a badly beaten 11th in Gulfstream Park’s Ginger Brew in her last race, and maiden winner O Seraphina round out the field.

Also on Saturday’s nine-race Oaklawn card is the $125,000 American Beauty Stakes for filly and mare sprinters aged four and older. The Brad Cox-trained Irish Mischief, another daughter of Into Mischief, is the 5-2 second choice in the field of eight and she is being ridden by Geroux. Irish Mischief has been freshened since her last effort in Mid-November and has recorded a solid pattern of works at Oaklawn for her comeback.

The 2-1 favorite in the early American Beauty wagering is Amy’s Challenge, who looks to defend her title in this six-furlong affair for owner Novogratz Racing and trainer Mac Robertson. Amy’s Challenge has been idle since a third-place finish in the Humana Distaff (G1) on May 4 but she clearly loves Oaklawn. Three of the four stakes wins on her sheet have come at the Arkansas track, and lifetime she has won six of 12 starts and finished in the money four more times. David Cohen, the leading rider here last year, picks up the mount for the first time when the 5-year-old mare begins her 2020 season.