Saratoga is always about finding the stars of the future, and Wit could be one. He’s 2-for-2 by a total of 14 lengths and will be heavily favored in Monday’s 7-furlong Hopeful Stakes (G1).

Unlike most dominant 2-year-olds, Wit doesn’t blast out of the gate and blow open races early. Instead, he breaks slowly, races in midpack and does his best running from the far turn to the wire. 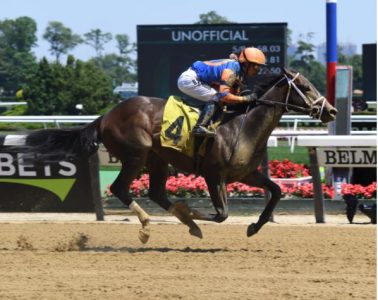 “He’s not a great horse breaking out of there,” rider Irad Ortiz, Jr. said after an eight-length runaway July 17 in Saratoga’s Grade 3 Sanford Stakes. “I gave him the time to find his stride, and he did.”

Wit shot from sixth on the backstretch to first by daylight in midstretch.

Co-owner Mike Repole owned Uncle Mo, the 2010 2-year-old champion and one of the world’s leading sires.

“Todd (Pletcher) and I had Uncle Mo, and I think he’s one of the greatest 2-year-olds of all time,” Repole told usracing.com. “He ran the way almost all the top 2-year-olds do, with all that early speed.

“But this horse is different. You don’t see top 2-year-olds run the way he does, and I think what Wit did first time out was one of the most impressive maiden wins I’ve ever had. He broke slow, took dirt and circled the field at 5 1/2 furlongs. I wondered what would have happened if he’d broke well.

“We’re not really sure what we have here.”

Depending on what happens in the Hopeful, perhaps a potential 2-year-old champion. Wit’s sire, Practical Joke, never got an Eclipse Award but did win the Hopeful and the Champagne Stakes at 2.

Fox Sports analyst Gary Stevens doesn’t think Wit’s style should be modified. The Hall of Fame jockey said, “This is how he likes to run, gradually getting into a race, and if it’s not broke …”

Don’t expect Pletcher to tinker with Wit. The longtime master of 2-year-olds knows they all don’t have to conform to the wire-to-wire template.

“I thought he broke a little better in the Sanford,” Pletcher said.
“He put himself in a good stalking position and used his very impressive turn of foot around the turn. 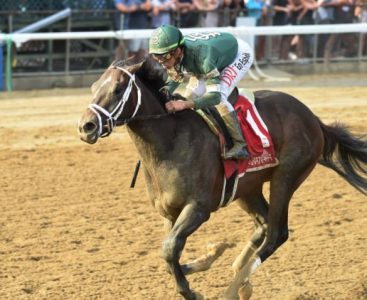 Wit at the Sanford Stakes – Photo Courtesy of Elsa Lorieul

“He’s very well behaved, very composed and mature mentally. He’s just one that for whatever reason is not super quick the first jump or two. He’ll sit off a horse and he’ll accelerate on command.”

Two-year-old fillies don’t get a fraction of the attention given to their male counterparts. Racing fans don’t obsess about potential Kentucky Oaks (G1) winners.

Saratoga will stage the Grade 1, 7-furlong Spinaway Stakes on Sunday, and likely favorites Echo Zulu and Proud Birdie will try to establish themselves as divisional leaders.

Echo Zulu makes her stakes debut after dominating a 5 1/2-furlong maiden race by 5 1/2 lengths as a first-time starter July 15 at Saratoga. About two hours later, Pretty Birdie, a homebred of the Marylou Whitney Stables, led wire to wire to take the Spa’s Grade 3, 6-furlong Schuylerville by two lengths.

Class handicappers will lean toward Pretty Birdie because she’s already a stakes winner. Echo Zulu will be the pick of numbers players, because her Beyer Speed Figure of 92 is the highest by a 2-year-old filly this year.