The $20 million Saudi Cup turned into a victory for the home team after Mishriff outkicked favorite Charlatan and won the world’s richest horse race for owner Prince A. A. Faisal of Saudi Arabia at King Abdulaziz Racetrack.

On Saturday night in Riyadh, in a much-anticipated duel between U.S.-based stars Charlatan and Knicks Go, it was Mishriff who stole the show with a brilliant ride from David Egan, at 21 the youngest jockey in the field. 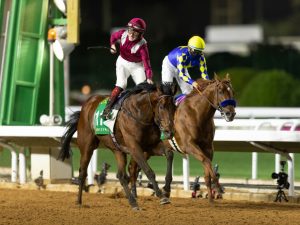 Mishriff, who ran second in last year’s Saudi Derby in his only previous start on dirt, is trained by Englishman John Gosden. The victory was worth $10 million.

The expected showdown began right from the start of the 1 1/8-mile [1,800 meters] race. But it was Bob Baffert-trained Charlatan who took charge early breaking from the No. 3 post, with Knicks Go, ridden by Joel Rosario, in close pursuit.

Coming into the turn, the two battled for the lead, but coming out of the turn and heading for home, it was Charlatan excelling and Knicks Go fading. Meanwhile, Mishriff was launching his bid to overtake Charlatan, who just couldn’t hang over the final 100 meters and was beaten by a length. It was the first time in five career starts that Charlatan did not cross the wire first.

“I can’t believe it! It was Mishriff that won it. He’s an absolute champion,’’ a smiling Egan said during a post-race interview while leading the 4-year-old bay colt to the winner’s circle. “[I’m] just privileged to be connected with such a class horse and I’d like to thank Prince Faisal, Mr. Gosden, and all the team back home in Newmarket. Just delighted to be aboard on the big day.”

Egan said he had a great ride.

“Delighted to get a good break … I spoke to a lot of people and got a lot of good advice from riding on the dirt from people in America,’’ he said. “It was important to get a good jump. I didn’t expect he would be able to travel so well behind the leaders. I didn’t see the rest of the horses, so we nearly probably traveled better than anything.

“So, when we came up the straight, when the two leaders kicked, it just took him a little while to get going but by golly we got him home.”

Baffert said he was more than fine with his lightly raced colt’s effort.

“I was very proud of his effort. Going in, we thought he would run his race,’’ said Baffert, who did not attend the races. “Turning for home, we knew they were going pretty fast early. He’s a fast horse, but that stretch — I’m glad we don’t have any stretches like that in America.”

Mishriff was listed at odds of 7-1 by BUSR.com

Finishing second was worth $3.5 million to Charlatan’s owners, SF Racing and Starlight Racing, while third place money is $2 million, fourth is $1.5 million, and fifth $1 million.

Mishriff, who won the French Derby (G1), last raced on Oct. 17, finishing eighth in the Grade 1 Champion Stakes at Ascot. Gosden blamed the uncharacteristically poor performance on the extremely soft ground. The dirt surfaces prove to his liking.

Asked what it’s like to win in front of Prince Faisal in his home country, Egan said: “Special. I always tell myself last year in the Derby if he hadn’t missed the break, he nearly would have beaten the Japanese horse [Full Flat] so it’s redemption for him in Saudi and to win in Prince Faisal’s backyard it’s an honor.”

Due to COVID-19 protocols, only a limited number of people were at the track, mostly Saudi officials, horse owners and connections.

Maximum Security won the inaugural Saudi Cup in 2020 but the winner’s purse has not been paid pending the results of a performance-enhancing drug investigation of the horse’s former trainer Jason Servis.

Prince Faisal’s representative, Ted Voute, said of Mishriff: “He was raised on the farm, Prince Faisal bred him. I bought the sire Make Believe as a foal for him. He’s bred the family all through the years and it means a lot to him. He was named after his best friend after he died. It’s amazing.”

In other races on the undercard:

Copano Kicking came through with a flying finish and nailed hard-luck Matera Sky at the wire for a thrilling victory in the $1.5 million Dirt Sprint.

Matera Sky, who lost this race last year in similar fashion, had a solid lead in the stretch but William Buick and Copano Kicking staged a dramatic closing run in the 6-furlong dash. The Japan-based gelding is owned by Japan’s Sachiaki Kobayashi.

Copano Kicking has now own 10 of 20 career starts and has earned more than $3 million.

Longshot Pink Kamehameha held on for half-length victory over fast-closing Cowan in the $1.5 million Saudi Derby for 3-year-olds going 1 mile.

The colt owned by Hisako Kimura gave Japan-bred horses a second straight win in this race, with Full Flat having won in 2020. Both horses are trained by Hideyuki Mori.

“Everything went perfect today. He showed a very good response to the jockey at the final turn, which was kind of surprising to me,’’ said Mori. “He ran on dirt for the first time, but today’s surface with a bit of rain affected track must suit him a lot.”

Cowan, trained by Hall of Famer Steve Asmussen, was far back in the field, but made a gallant run under Joel Rosario and closed to get second – the colt’s fourth straight runner-up finish.

Coming into the race, Cowan was second in the Smarty Jones, Springboard Mile, and Breeders’ Cup Juvenile Turf Sprint.

“He missed the break. Right when they opened the gate his head was turned, so he lost the break, but he came running,’’ said Rosario. “They went very fast up front and he almost got there. It was a good run from him.”

Interestingly, Rosario was scheduled to ride the winner, but was given permission to take off the horse and ride Cowan after Cowan’s jockey Umberto Rispoli was unable to travel to Saudi Arabia due to COVID-19 travel issues.

Godolphin’s Gifts of God, based in Ireland, delivered a perfect trip, and won the $2.5 million Red Sea Turf Handicap by 1 ¼ lengths over U.S.-based Spanish Mission. Godolphin’s Secret Advisor was third.

Trained by Saeed bin Suroor and ridden by Pat Cosgrove, Gifts of God was taken four wide as Making Miracles took the lead from Mildenberger and last year’s winner Call the Wild.

Gifts of Gold outsprinted the field in the stretch and was a clears winner, with Spanish Mission closing strong for second.

“This was the plan since January when racing started in Dubai. I thought he would be the perfect horse. He’s a big strong horse and he ran well. The pace of the race wasn’t that fast and that suited him, and he finished the race off really well,’’ said bin Suroor.

Ireland-bred Space Blues gave Godolphin its first win on the day with strong stretch run in the $1 million Turf Sprint, which was delayed slightly due to rain.

Trained by Charles Appleby and ridden by William Buick, the 5-year-old son of Dubawi, sat in the second tier of horses as Kripsen and Urban Icon set the pace. As the field, including last year’s winner Dark Power, Space Blues was taken outside, along with stablemate Glorious Journey.

Spaces Blues caught the leaders in the final 300 meters and won by three-quarters of a length over Dark Power. Urban Icon was third.

“Absolutely delighted with that. We knew he was a class horse coming into the race,’’ said Appleby, who added the Dubai World Cup could be next for the winner.

“We had a great run through. He broke well and I didn’t want to be too close to the pace,’’ said Buick. “The pace was perfect. It wasn’t too hot or too slow. I followed Frankie [Dettori, aboard Dark Power] before the split in the straight. It was how I hoped the race would pan out. He was the best horse, and I didn’t want to go for any heroics.”

True Self, an 8-year-old mare ridden by British star Hollie Doyle, rallied past Channel Maker in the final 50 meters to win the $1 million Neom Turf Cup by 1 ¼ lengths.

U.S.-based Channel Maker, the 2020 Eclipse Award winner as champion male turf horse, had what seemed to be a comfortable lead in the middle of the stretch in the 1 5/16-mile race [2,100 meters], but it wasn’t enough.