Pinehurst Gives Baffert a Victory in the Saudi Derby 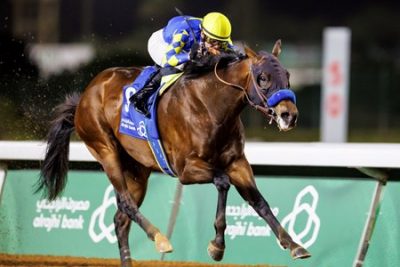 Hall of Fame trainer Bob Baffert won another Derby on Saturday when Pinehurst took the lead from the start and held off 13 rivals in the $2 million Saudi Derby (G3), a few races prior to the $20 million Saudi Cup (G1).

Pinehurst, ridden by Flavien Prat, broke cleanly from the gate and was never seriously challenged until the final 100 meters, when Japan-based horses Consigliere and Sekifu moved closer, but Pinehurst grinded out the victory.

The win has to be much appreciated by Baffert in a week that saw his 2021 Kentucky Derby (G1) winner Medina Spirit disqualified due to a post-race positive for a banned race-day medication, and his appeal for a stay to his suspension denied by Kentucky racing officials.

In Riyadh, though, it was a big win for Team Baffert, with longtime assistant Jimmy Barnes in attendance.

“He handled everything well,’’ Barnes said. “He left the gate running, and I couldn’t be happier. At the end he showed a lot of stamina and heart to hold of the Japanese horses.”

Pinehurst, a 3-year-old son of Twirling Candy, was sent off as the favorite in the international field. Baffert-trained Country Grammer was entered in the Saudi Cup later in the day.

Since Churchill Downs, home of the Kentucky Derby, suspended Baffert for two years, his horses are ineligible to earn Derby qualifying points.

Pinehurst’s path to stardom could take him next to the UAE Derby (G1) in Dubai next month, where Derby qualifying points of 100-50-20-10 are on the line. Should the owners decide to switch trainers, there’s a chance Pinehurst could stay in the picture for the Run for the Roses on May 7. If not, there’s still plenty of races for Pinehurst under Baffert’s care. While the future remains confusing, Pinehurst made it look pretty simple.

“I just wanted to get a good, clean break at the start,’’ Prat said. “He was actually waiting on horses (near the end), but every time one came up, he just dug in.”

Pinehurst won his first two starts, including the Del Mar Futurity (G1) before running fifth in the Breeders’ Cup Juvenile (G1) to close out his 2-year-old campaign. In his 3-year-old debut, he finished second in the 7-furlong San Vicente Stakes on Jan. 29, and now he’s won at one mile. The UAE Derby is 1 3/16 miles (the same distance as the Preakness, the second leg of the Triple Crown, on May 21).