Pimlico Special: Breaking Down the Field Horse by Horse

Maryland racing’s time in the spotlight has finally arrived after a 4 ½-month delay due to the coronavirus pandemic. Pimlico Race Course is ready for Preakness Weekend, with the main event – the 145th Preakness (G1) — on Saturday, but there’s a pretty special race on the card Friday – the $250,000 Pimlico Special (G3).

Before digging into all of Saturday’s graded stakes races leading up to and including the Preakness – this year’s final leg of the Triple Crown – let’s begin with sorting out the Pimlico Special for older horses going the same 1 3-16-mile distance of the Preakness. 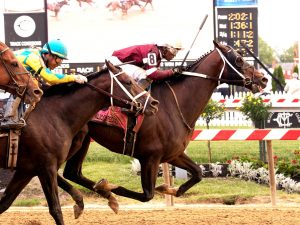 The Pimlico Special caps an 11-race Friday card, and hopefully will set the stage for Saturday’s action by offering horseplayers a pre-Preakness chance to build bankroll and get a feel for how the track may be playing at the 1 3/16-mile distance.

The race drew a solid field of nine, and seems evenly-matched enough to give racing and wagering fans something to sink their teeth into. Here’s a handicapping look at the field by post position (Owendale is the 8-5 morning-line favorite):

1 Cordmaker (8-1) is last year’s third-place finisher in the Pimlico Special, when he was flying late only to be beaten a half-length by Tenfold, the defending champion who is also back in the field. This horse enjoyed a highly-successful 2019 campaign, which included five victories in addition to his Pimlico Special near miss. The problem has been that he’s been unable to recapture last year’s form with four losses in four outings this past season at Laurel. The bright side is that the best of the recent outings came last time out when second in the Deputed Testamony, so perhaps he’s on the uptick. However, the Deputed Testamony was yet another loss against Harpers First Ride, who is in this field. Anything more than a minor placing in this race seems like it will be a tough task.

2 Monongahela (15-1) has had his share of career highlights, including stakes wins in races like the 2019 Iselin (G3) at Monmouth where he posted a 102 Beyer speed figure back when he was trained by Jason Servis. His best days appear to be behind him, however, with three poor results in dating back to June 6 when trained by Chad Brown. Current trainer Brittany Russell took over last time for his fourth-place finish in a Delaware Park optional claimer. Nothing suggests a positive turnaround.

3 Plus Que Parfait (12-1) is best known for his 2019 UAE Derby win, but the fact remains he’s winless since, including a failed attempt in the 2019 Kentucky Derby and a couple of unsuccessful forays on the grass. Highlights along the way have included a third-place finish more than a year ago in the West Virginia Derby (G3), and another promising effort last time in the Charles Town Classic (G2), where he finished a distant second at 25-1. He’s not hopeless in this spot if able to turn in another similar effort, but the good races in his past performances happen too little and too late. A very tough spot here.

4 Someday Jones (9-2) is a solid stakes presence in the mid-Atlantic region dating back a year and a half, and did win an open stake at Laurel in December in the Native Dancer at 1 1/8 miles, where he beat Maryland monster Alwaysmining for trainer John Servis. The three most recent outings don’t appear to have been quite as good, but he did win an optional claimer at Delaware in July and now exits a second-place finish in a Pennsylvania bred stakes at Parx. Perhaps he’s not the one to beat in this spot, but he owns 11 career victories and 18 career exacta finishes from 29 outings, so it’s difficult to count him out of the exotics.

5 Tenfold (5-1) is the defending Pimlico Special champion (the race was mid-May last year). Unfortunately, that win seems to have been his last hurrah – he’s winless in his nine starts since, even finishing behind Plus Que Parfait in the Charles Town Classic. On the plus side, this horse has kept much tougher company than most of competition with the exception of Owendale. Some of his losses came in spots such as the Stephen Foster (G2), the Pegasus World Cup (G1), and the Gold Cup at Santa Anita (G1), where finished third. The advantage he has over much of the field is his wheelhouse distance ranges from 1 1/8 miles to 1 1/4 miles – so 1 3-16 miles could be just right. On the down side, is the horse is a plodding closer, and there appears to be absolutely no pace in this year’s edition.

6 Clubman (20-1) is taking a longshot flyer in this one and appears to be overmatched, not just in terms of ability buy also in terms of distance, since he’s more of a late-running sprinter than a proven two-turn route horse. Has not been better than fourth in any of his four recent outings. Longshot.

7 Forewarned (20-1) is a horse with some long-distance ability on his best days, and will be one of the horses in this race that benefits from the 1 3/16-mile distance. His best career race was a win in the 2019 Ohio Endurance at 1 1/4 miles at Mahoning Valley, but unfortunately he has usually not done as well when leaving Ohio-bred competition, which he has done on multiple occasions with limited results. Trainer Uriah St Lewis is capable of posting major upsets, so you shouldn’t totally sleep on this horse. Nevertheless, it sure would be a lot easier to be optimistic of his chances if there was any amount of early pace to chase. Instead, we have a deep closer who probably will be too far back to make a dent.

8 Owendale (8-5) as had an up-and-down career that has featured plenty of solid winning efforts in second-tier races that have included the 2019 Lexington (G3), the 2019 Ohio Derby (G3), and the 2019 Oklahoma Derby (G3). Also earned a 2020 victory in the ungraded Blame Stakes at Churchill Downs on May 23. Since then his two losses have come against some of the absolute best horses in the handicap division when beaten by Tom’s d’Etat in the Stephen Foster (G2) and by By My Standards last time out in Churchill’s Alysheba (G3). The most encouraging thing about Owendale’s Alysheba effort was that he was able to show more tactical speed in that race and actually stayed close to the pace in a big change to his running style. That on-or-close to the pace style could pay off big dividends if he’s willing and able to do it again. John Velazquez picks up the mount in a strong sign of positive trainer intent for Brad Cox. Owendale ran in the 2019 Preakness and earned a bang-up third-place finish, beaten only about a length. When you add it all up, Owendale is the horse to beat.

9 Harpers First Ride (5-1) loves to win with victories in seven of his 13 career outings, including a runaway score at Laurel last time out in the local tune-up, the Deputed Testamony. Best speed figures tend to stack up nicely against the top challengers, and he has a slight bit of tactical speed which will come in handy in this pace-less race because he should be able to stay close to the front. Seems to be an up-and-comer for Maryland-based trainer Claudio Gonzalez, who is off to a hot start at the abbreviated 2020 Pimlico meet. Should be forwardly-placed on a slow pace and able to hold on to finish in the money, at least.

When handicapping this race, the key element seems to be pace, or lack of it in the field of nine. On paper, there’s very little separating the likes of Owendale, Harpers First Ride, Tenfold, and even Someday Jones, but based on the lack of pace, the horses who have the ability to flash even a little tactical speed hold the advantage – Owendale and Harpers First Ride. Of those two, you have to like Owendale’s proven record of winning second-tier stakes spots, and Hall of Famer Johnny V is picking up the mount.