Mike Maker doesn’t show much emotion, but the trainer may have actually smiled after pulling off a Pimlico Special/Black-Eyed Susan double on Friday, the day before the 146th Preakness Stakes.

Minutes before these races were run at Pimlico Race Course, Kentucky Derby winner Medina Spirit and stablemate Concert Tour were cleared by Maryland racing officials to run in Saturday’s Preakness. Both are trained by Hall of Famer Bob Baffert.

Beautiful Girl, also trained by Baffert, ran in the Black-Eyed Susan (G3) but was a disappointing seventh as Army Wife ($11) cruised to the lead in the stretch for a 2 3/4 length victory over Willful Woman, with pace-setter Lady Traveler third. 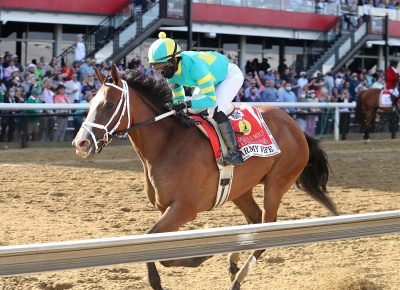 Army Wife was given a ground-saving ride by Joel Rosario. Running along the rail after breaking from post 1, Army Wife tracked the leaders, stayed inside until the final turn entering the stretch and was moved into the two path as she overtook 18-1 longshot Lady Traveler.

“I liked her chances. The rail seemed like the spot to be today, and we finally got a good trip out of her,’’ Maker said.

“It was a decision that I had to make because they were coming back a little bit in front of me and I had horse,’’ Rosario said of his decision to move off the rail. “I decided I needed to go because I had some room to go and just let her run her race like she always does.”

“We thought she would run a little better than that. Johnny (Velazquez) said that when he needed horse he just didn’t have it. We’ll wrap things up and probably head back to California with her.”

“Very classy horse. We like the way he’s responded on that stretch out,’’ Maker said. Fabulous (claim) by these guys (co-owners Steve Hornstock and Steve Spielman).”

The horse was claimed last fall for $62,500 off a head victory at 6 ½ furlongs at Belmont Park.

Ridden by Jose Ortiz, led at every call and was never seriously threatened The 5-year-old gelding improved to three victories in five starts this year, and boost his career earnings to $490,465 for owners Michael Dubb, Steve Hornstock, Bethlehem Stables LLC and Nice Guys Stables.

Fearless, the even-money favorite was third in the 10-horse field.

As for Baffert’s horses, they underwent three rounds of blood sample testing as part of an agreement with Maryland racing officials due to Medina Spirit failing a Derby post-race test for the steroid. Medina Spirit is the 9-5 morning-line Derby favorite.