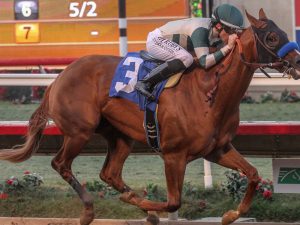 Let’s take a detour on the road to the Kentucky Derby, and shift our attention to the $3 million Pegasus World Cup (G1) at Gulfstream Park in less than three weeks.

A dozen horses (plus four also-eligibles) were invited Sunday (Jan. 3) to the fifth running of the 1 1/8-mile race for 4-year-olds and up on Jan. 23. To the surprise of hardly anyone – Hall of Fame trainer Bob Baffert has a pair of the likely favorites.

Mucho Gusto, the defending champion, is set to return as is Charlatan, who has finished first in all four of his races, including the Malibu Stakes (G1) at Santa Anita on Dec. 26.

Charlatan, meanwhile, returned with a victory after a seven-month layoff due to an ankle injury. The now 4-year-old won a division of the Arkansas Derby (G1) on May 2, but a post-race medication positive resulted in a disqualification.

The also-eligibles are Anothertwistafate, Math Wizard, King Guillermo, and Idol.

Also, the invitees for the $1 million Pegasus World Cup Turf (G1) were announced, led by Grade 1 winners Say the Word and Storm the Court, and three horses trained by Todd Pletcher.

Baffert has saddled the winners in two of the four Word Cups – Arrogate in 2017, Mucho Gusto in 2020.

Knicks Go has won three in a row since being moved to trainer Brad Cox’s stable, including the Breeders’ Cup Mile (G1) at Keeneland on Nov. 7.

The others with first preference are Anothertwistafate, Breaking the Rules, Cross Border, Doswell, North Dakota, Pixelate, Say the Word, and Sharp Samurai. The also-eligibles are Next Shares, Field Pass, Analyze It, and Greyes Creek.

Largent, a son of Into Mischief, comes into the race off a win in the Fort Lauderdale on Dec. 21. The gelding has won six of nine career starts, including four of five at Gulfstream

Colonel Liam won three of five starts in 2020, including the Tropical Park Derby on Dec. 26.

Say the Word comes into the Pegasus Turf off a third in the Hollywood Turf Cup (G2) after winning the Northern Dancer Turf (G1) at Woodbine in October. Storm the Court, the 2019 BC Juvenile (G1) winner, has moved to turf and most recently ran seventh in the Hollywood Derby and second in the Mathis Brothers Mile (G2).

Klaravich Stables was the runaway winner as top owner with 48 victories – 14 more than Repole Stable. The NYRA tracks are Aqueduct, Belmont and Saratoga.

“I’m pretty happy about it and I’m very proud of the work we put into it,” said Ortiz. “This is why you work this hard. It was a tough year. We couldn’t work horses in the morning like we normally could, but we made it through and I’m just happy we’re all healthy coming out of this.”

Brown compiled a 91-81-83 record with 411 starters to become the first NYRA trainer to record six straight training titles since Gasper Moschera from 1993-98. Todd Pletcher second with 81 wins for the year.

Brown’s runners won more than 22% of the time and his hit the board at aa 62.04% rate on the NYRA circuit. Among his highlight wins were the Diana (G1) with Rushing Fall and the Saratoga Derby Invitational with Domestic Spending; the Manhattan (G1) with Instilled Regard; and the Just a Game (G1) with Newspaperofrecord.

Klaravich Stables, headed by Seth Klarman, won at least a share of four of the five individual NYRA meets. Klaravich sent out 171 starters on the NYRA circuit, going 48-30-39 for a 28.07% win rate.

Also, NYRA announced it had registered an all-sources handle of more than $1.8 billion in 2020 – a 19% increase over the average daily handle over 2019.