While waiting for the start of the 145th Preakness (G1), post time is scheduled for 5:36 p.m. ET, let’s take a look at the five graded stakes races on the Saturday card at Belmont Park – and much more.

ICYMI, champion mare Midnight Bisou was retired, the Saudi Cup announced the race will go again in 2021, and there’s a chance for a Triple Crown in Canada after Mighty Heart won the Prince of Wales.

Belmont has a little of everything

A pair of Grade 1’s, three Grade 2’s and a Breeders’ Cup “Win and You’re In’’ race for the Belmont Derby Invitational winner. Not a bad day of racing at Belmont on Saturday.

A field of nine takes to the turf, including the top three finishers from the Saratoga Derby Invitational in August — Domestic Spending, Gufo and No Word.

Gufo (3-1) finished a head behind Chad Brown-trained Domestic Spending in the Saratoga Derby, and his trainer Christophe Clement hopes to turn the tables.

“He’s been training very forwardly since the race at Saratoga,’’ Clement said. “I had two choices; to run him here or go to Kentucky Downs. We trained for here because we think he’s an ideal horse to run at Belmont with the wider turns and the mile and a quarter will be really good for him.”

Domestic Spending (5-2) did not race as a 2-year-old, and has gradually worked his way into Grade 1 territory.

No Word (9-2) was just a half-length behind Gufo at Saratoga for his best finish in a stakes race. The 3-year-old is trained by Todd Pletcher, who will also sent out Mo Ready (30-1), a last-out allowance winner at Saratoga on Aug. 15.

Channel Maker (5-2) and Sadler’s Joy (7-2) are set to go at it for the 15th time in this marathon. Each horse is running in the Joe Hirsch for the fourth year in a row.

Channel Maker, trained by Bill Mott, won gate-to-wire in 2018; Sadler’s Joy is looking for his first win in this race for trainer Tom Albertrani.

The 6-year-old Channel Maker was sixth in the 2017 edition and second to Arklow last year. He comes into the race off a front-running victory in the Sword Dancer (G1) at Saratoga on Aug. 29. Manny Franco has the call from post 3.

“Manny rode him very well the last couple of times and we’re lucky to get him back,’’ Mott said. “The race he ran last time, you can’t expect that every time. But if he shows up, he’s usually a factor.”

Sadler’s Joy finished fourth in the Joe Hirsch in 2017, and third the past two years. The 7-year-old was a distant fourth to Channel Maker in the Sword Dancer.

“It’s a good rivalry. They’ve both finished ahead of each other in the past,” Albertrani said. “A lot will depend on the weather and who prefers softer ground, so hopefully the rain Sadlcan hold off.” Javier Castellano will ride er’s Joy for the 18th time and leave from post 1.

The field is small, the talent is large, headed up by multiple-Grade 1 winner Code of Honor (1-1).

The 4-year-old trained by Hall of Famer Shug McCaughey enjoyed a summer of success in 2019, winning the Travers (G1) and the Jockey Club Gold Cup after a stretch-long duel with Vino Rosso that ended in Code of Honor being elevated to first after his rival was DQ’d. He was also second in the Kentucky Derby (G1) after running third but moved up to second after first-place finisher Maximum Security was DQ’d.

He opened 2020 with a win over Endorsed (also entered in the Kelso) in the Westchester (G3); then finished third in the Met Mile (G1) and fourth in the Whitney (G1).

“After the Whitney I had to start over with him, so this is the restart,” McGaughey said. “I don’t want to run him a mile and a quarter after I backed off on him.”

Endorsed (7-2) has won four of 11 with three runner-up finishes, but is still looking for his first graded-stakes win.

Public Sector, the 5-2 favorite, has a chance to give trainer Chad Brown his fourth win in this race, which drew a field of eight. Brown’s most recent winner was in 2019 with Structor, who went on to take the BC Juvenile Turf (G1).

A son of Kingman, Public Sector opened his career with a two-length win at 1 1/16 miles on Aug. 15 at the Spa. Hall of Famer Javier Castellano will be aboard. 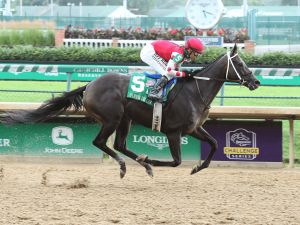 Frank’s Rockette is the strong 1-2 favorite in a field of six. The 3-year-old filly trained by Hall of Famer Bill Mott has gone off the favorite in all nine of her career starts, and has never finished worse than second – she’s 3-2-0 in 2020 with each start at a different track.

Last out, the filly made it three wins in a row by taking the Prioress (G2) in Sept. 5 at Saratoga.

Jockey Junior Alvarado has the call on Frank’s Rockette, leaving from post 4.

Call it Hall of Fame career for Midnight Bisou

The 5-year-old mare, who won her first seven races in 2019 (three Grade 1’s) before finishing second in the Breeders’ Cup Distaff (G1), has been retired after fracturing a sesamoid in her right front fetlock.

What a star attraction on the track! In 2020, she was a gallant second to Maximum Security in the $20 million Saudi Cup in February (the winner’s share is still in question), then won the Fleur de Lis (G2) in June and ran a close second to Vexatious in the Personal Ensign (G1) in what would be her final race.

Last week, Midnight Bisou worked 4 furlongs in 50.15 seconds at Saratoga prior to a scheduled start in Spinster (G1) at Keeneland on Sunday. Scott Blasi, assistant to trainer Steve Asmussen, noticed the mare as off in her right foot, Dr. Larry Bramlage at Rood and Riddle Equine confirmed the injury a few days later (no surgery needed) and she was retired.

Midnight Bisou – 22-13-6-3 and earnings of $7.4 million – will be offered as a broodmare prospect on Nov. 8 at the Fasig-Tipton bloodstock auction.

“I cannot begin to tell you what this mare has meant to me, my family, and my partners,” Jeff Bloom, managing partner of co-owners Bloom Racing, said in a news release “The places she has taken us and the thrills she has given us are immeasurable. And just to be in her presence is what greatness is all about.”

Saudi Cup to return for a second year

The $20 million Saudi Cup will be back again in 2021, the Jockey Club of Saudi Arabia announced last week.

Prince Bandar Bin Khalid Al Faisal, chairman of the Saudi jockey club said via a video link from King Abdulaziz Racecourse in Riyadh that the inaugural was a great success.

“It’s hard to overstate the success of Saudi Cup 2020 when you consider that in year one of a brand-new international racing event, we attracted some of the very best horses, trainers and jockeys in the world,” he said. “We witnessed 22 individual Group or Grade 1 winners, who had accumulated an impressive 34 wins at that level between them. That would be an excellent statistic for even the most well-established race meetings in the world, let alone to have that caliber in year one.”

Maximum Security won the Saudi Cup over a fast-closing Midnight Bisou, but after the indictment of the colt’s trainer at the time, Jason Servis, for the use of performance enhancing drugs on racehorses, the winner’s share of the purse has not yet been distributed.

Mighty Heart has won first 2 legs of Canadian Triple Crown, next up is the Breeders’ Stakes

Mighty Heart overtook Clayton in deep stretch and won the $400,000 Prince of Wales Stakes on Sept. 29, giving the 3-year-old colt a chance to become the first Canadian Triple Crown winner since Wando in 2003.

The one-eyed Mighty Heart had won the opening leg 17 days earlier, taking the $1 million Queen’s Plate at Woodbine. The Breeders’ Stakes, 1 ½ miles on turf, is Oct. 24 at Woodbine.

Mighty Heart, the 6-5 favorite, was ridden by Daisuke Fukumoto. They were sitting third coming off the final turn but easily passed Dotted Line and then Clayton with win the 1 3/16-mile race in 1:55.20 with no spectators at Fort Erie Racetrack.

“This is a nice horse, I think he’ll take to the grass,’’ she said. “Certainly he’s bred to so fingers crossed.”

Looking for an unprecedented third victory in the l‘Arc, Enable is the 11-8 favorite in a field of 15 for Sunday’s race, and leaves from post 5.

Love, trained by Aidan O’Brien, was the expected favorite until it was announced Thursday that the 3-year-old filly would not make the trip to Paris.

Persistent rain an Longchamp over the past few days does not make the racing conditions favorable for Love, and that leaves Enable’s trainer John Gosden with yet another solid contender in Stradivarius, winner of the Gold Cup at Ascot the past three years.

Last year, under soft ground, Enable finished second to 16-1 long shot Waldgeist will attempting to win the l’Arc for the third year in a row.

Sottsass, who ran third in the 2019 l’Arc, is back for another try.

Enable comes into the l’Arc with 15 victories in 18 starts, with two seconds and one third and earnings of more than $14 million. She’s won her last two starts, the King George VI & Queen Elizabeth Stakes (G1) at Ascot on July 25 and the September Stakes (G3) at Kempton Park on Sept. 5.