The Honeymoon Stakes (G3T), which will be contested for the 69th time on Saturday at Santa Anita, is another Hollywood Park transplant that carries some significant history. 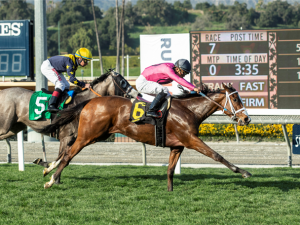 The grassy test, which has in recent years served as a prep for the American Oaks but now stands on its own as a significant stop for sophomore fillies who prefer the turf and don’t point toward the Kentucky Oaks (G1).

Names like Turkish Trousers, Antespend, Megahertz, Evening Jewel and Lady Prancealot a year ago are some of the names who have won this now nine-furlong turf test (it’s been contested at varying distances from a mile to 1 ¼ miles throughout the years) and this year nine will head to the gate in search of a spot on the winner’s list and the lion’s share of the $100,000 purse.

The morning line favorite, Stela Star, drew the far outside and odds of 2-1 from linemaker Jon White off her somewhat troubled second-place finish in the March 2 China Doll Stakes.

The Irish-bred daughter of Epaulette won a group 3 at Leopardstown last year before being privately purchased by Hronis Racing and imported to America.

She hasn’t ever raced beyond a mile, but was solid at a furlong shorter and mostly ran out of real estate and was still only beaten a half-length. She will for sure be rolling late under new jockey Flavien Prat.

Second choice at 5-2 is Gary Barber’s lightly raced Laura’s Light, who returns to the turf after an unsuccessful foray over a synthetic track at Turfway Park, where she finished a flat fourth as the 4-5 favorite.

The Peter Miller-trained daughter of Constitution returns home and to her favorite course, where she won the Blue Norther Stakes and Sweet Life Stakes (G3T) in her previous two starts.

Jockey Abel Cedillo returns and it’s a good bet this one will head right to her preferred spot on the lead out of the gate. This is her first stab at the distance, but she has a pedigree to suggest it’s well within her ability.

LNJ Foxwoods’ homebred Parkour returns to stakes company after a nice allowance win at a mile more than two months ago.

The daughter of Carpe Diem, who is trained by Richard Mandella, is another one who will be gunning for the lead and if she gets it and is allowed to open up will be tough to catch under jockey Mike Smith. She has also yet to test the distance, but is in capable hands for her first stab at it.

Eclipse Thoroughbred Partners’ Irish import Red Lark makes her fourth career start in the U.S. and her second since breaking her maiden back in February at this distance.

Drayden Van Dyke returns to ride the Paddy Gallagher-trained daughter of Epaulette, who does her best running down the lane. Fashion Royalty comes from the same barn, but has a bit more stacked against her in this field, especially questions about the class jump.

French-bred Guitty was brought to the U.S. last summer and unloaded a pair of turf wins at Del Mar, but has really struggled in stakes company since.

She needs to prove she belongs in this company before anyone can really bet her with much confidence.

Croughavouke hasn’t won in six starts stateside, but has three placings and a not-so-awful sixth-place finish over this course in the Breeders’ Cup Juvenile Fillies Turf (G1T). She’s another one who will be rolling late who may just need to avoid a traffic jam for a larger piece of the pie.

Trainer Jeff Mullins will also saddle K P Dreamin, who made a pretty decent switch to the turf with a third behind Parkour in an allowance race in her last start.

It was her best race in a while, so she may have found a home on the lawn. She does face a class jump here, but she might be worth rolling the dice in exotics.

Little Bird’s ninth-place finish in the China Doll Stakes last out was better than it looks as she was beaten by just four lengths and encountered a bit of traffic in the lane. She’s certainly worth a look, especially at a price.

The Honeymoon is the day’s 7th-race feature and is set to leave the gate at 3:37 p.m. PT. The field, in post position order, is: