The NTRA’s National Horseplayers Championship (NHC) opens Friday in Las Vegas for the 23rd time with the finals set through Sunday (Jan. 28-30).

The NHC handicapping tournament is the culmination of a yearlong series of contests that crowns the next Eclipse Award winner for Outstanding Handicapper. The event also will award purse money approaching $3 million.

The NHC returns to its normal spot on the calendar at Bally’s Las Vegas, which will host for third year in a row. The 2020 event was held in February, just weeks before the Covid-19 outbreak. The 2021 edition of the NHC was held five months ago in a postponement from its customary dates. 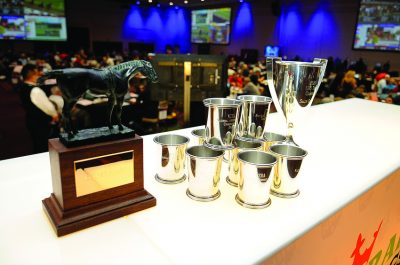 “With the support of our partners at Bally’s and Caesars Entertainment, we have a great opportunity to host a world-class event in the safest possible environment for our participants, guests and employees,” said the NTRA’s chief operating officer Keith Chamblin.

The top prize in thoroughbred handicapping will be up for grabs among a field of about 700 qualifying entries from North America (roughly 550 individuals, including players that have qualified twice). The finalists earned their trips finals with wins or top finishes in contests held in 2021 on qualifying tournament websites, and at racetracks and off-track sites.

NHC finalists will try to compile the highest earnings based on mythical win-and-place wagers through the first two days of the tournament on races from the season’s top simulcast signals including Aqueduct, Fair Grounds, Golden Gate, Gulfstream, Laurel, Oaklawn, Santa Anita, and Tampa.

The top 10% of the players after Friday and Saturday’s action will make the cut, advancing to the final and deciding day on Sunday. The top 10 scorers will square-off at the “Final Table” to decide the championship on Sunday afternoon. All players who make the cut – about 70 — will earn a share of the prize money, with first prize expected to be $750,000 to the winner.

The NHC XXIII field will be seeking to unseat reigning champion Justin Mustari, 26, of Des Plaines, Illinois, who became the youngest winner of the event. Also in the field is 2020 winner Thomas Goldsmith, 58, of Montgomery, California.

Handicappers cannot buy an entry fee to play in the NHC. They must join the NTRA’s NHC Tour and win a spot. Qualifying for the next NHC finals in early 2023 is already open. For a full schedule of NHC handicapping events, and to join the NHC Tour, go to www.NTRA.com.