The assassination of Archduke Franz Ferdinand on June 28, 1914 in Sarajevo touched off the horror that was World War I. That afternoon in Paris, between the third and fourth races at Longchamp, an army officer broke the news to French President Raymond Poincare. 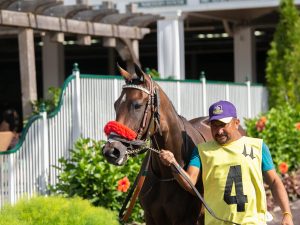 In “July 1914: Countdown to War,” author Sean McMeekin writes: “Although intrigued by the report, Poincare did not leave his seat, not wishing to miss the finish of the race then underway.”

Talk about lack of perspective. Most historians would agree that in the grand scheme of things, The Great War turned out to be more significant than the result of the fourth at Longchamp on that fateful summer Sunday. But horseplayers might cut Monsieur Poincare some slack, especially if he was still alive in the early pick 4.

The moral of the story: Even when the world is coming apart, gambling is a riveting distraction, particularly amid a pandemic that has shut down most of our planet’s racetracks. I’ve visited 116 of them in eight countries on four continents, and I intended to add to the list during my first full year of retirement. That plan is on hold indefinitely.

If you prefer playing the horses to binge-watching Netflix and zoning out on video games, you’re feeling the pain, too. Aqueduct, Fair Grounds, Santa Anita, Keeneland and hundreds of other tracks around the globe are shuttered, about to close or unlikely to open. And who knows how long Gulfstream, Tampa Bay Downs, Remington and Oaklawn Park will keep running?

As for Cal Expo, Fonner Park and Will Rogers Downs, does it really matter?

For the time being, forget about Britain and Ireland, where betting usually is nonstop. France, Germany, New Zealand and South Africa also have gone dark. On Friday morning, all TVG could show was Kranji from Singapore. On Saturday, there were only trotters from Solvalla in Sweden. That was weird and depressing, and not because I crave action.

Besides Saturday stakes, I rarely wager in wintertime. Except for the Cheltenham festival, I didn’t make a bet on the jump races from obscure tracks in England, Scotland and Ireland.

I had breakfast while watching marathons from Taunton, Ayr and Thurles, intrigued by their unique configurations and the cows and sheep on nearby hills. Even with no stake in the outcomes, I enjoyed seeing magnificent animals doing what they were born for.

That fun is canceled for the foreseeable future. With the sport in limbo, not even Aidan O’Brien, the world’s greatest trainer, is exempt.

“That’s the reality of the situation now,” O’Brien told the England-based Racing Post. “All we can do is help everyone on the front lines who is dealing with this crisis. After that, we will just have to take it day by day.”

Or night by night, because Australia, Japan and Hong Kong are still operating. But unless you keep vampire hours from midnight until dawn, you’re shut out there, too, unless you bet before bedtime, tape TVG’s “International Racing” and see how you did when you wake up.

Weirdly, my daily routine hasn’t changed much since the government told us to self-isolate at home. Without knowing that I was social distancing, I’d been practicing it since ending a 43-year newspaper career last August. I’ve filled the hours with too much TV, long walks, tidying the house and freelancing about racing. Because almost all the news is bad, I find staying informed far more disturbing than staying in.

Eventually, coronavirus (Covid-19) will run its course, and The New Abnormal will fade away. Racing will return, and it will be even more compelling after months of absence. Until then, take heart in the lyrics of “We’ll Meet Again,” a sentimental English tune from World War II. Find it on YouTube and have a FaceTime sing-along with your pari-mutuel pals. You’ll feel a little better.

Here’s how it goes:
“We’ll meet again,
Don’t know where,
Don’t know when,
But I know we’ll meet again some sunny day.
Keep smiling through
Just like you always do,
’Til the blue skies
Drive the dark clouds far away.”
Somewhere down the road, we’ll get our world back. It’s brutal to wait, but there’s nothing else to do.