California’s road to the Breeders’ Cup gets underway on Saturday with the $250,000 Bing Crosby Stakes (GI) at Del Mar, a Breeders’ Cup “Win & You’re In” event for the Sprint in November at Keeneland Race Course.

The Bing Crosby has consistently showcased the best summertime sprinters west of the Mississippi and over the years champion sprinters such as Chinook Pass, Lit de Justice, Kona Gold (twice) and Points Offthebench have graced its winner’s circle. Agave Racing’s Ransom the Moon won twice in 2017 and 2018 and Cistron won a year ago before heading to the sidelines for the rest of 2019.
Hall of Fame trainer Bob Baffert and Bruce Headley own four Bing Crosby victories apiece and jockeys Eddie Delahoussaye and Corey Nakatani each have booted home five winners. Lord Nelson set the stakes record of 1:07.65 when he won in 2016. 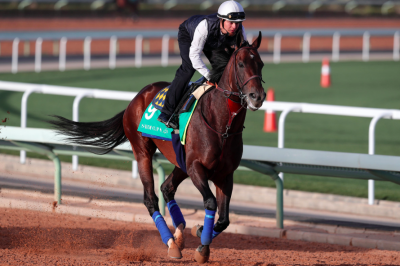 Baffert will be shooting for a fifth with Pegram, Watson and Weitman’s 5-year-old McKinzie, who could become the first male in modern day racing to win a Grade 1 at age of 2, 3, 4, and 5. The son of Street Sense has been consistent at route races but has never won at 6 furlongs.

The Baffert-trained son of Street Sense has never tested the distance and has made a career out of mostly route races. But it’s hard to second-guess a Hall of Famer who clearly believes his charge deserves a chance here. McKinzie is consistent, having racked up a nice career with eight wins and six seconds from 17 starts and has earned more than $3.4 million. Blessed with natural speed, he did win the 7-furlong Triple Bend Stakes (G2) on June 7 and has regularly earned triple-digit speed figures.

Hall of Famer Mike Smith will be back in the saddle.

Fashionably Fast has done his best running against fellow California-breds, winning a number of restricted stakes, and carried a seven-race win streak, including four stakes, heading into his runner-up finish to McKinzie in the Triple Bend. He has a nice record of three wins from five starts at the distance and likes Del Mar, plus he’s been training great for a few weeks over the surface. His figures suggest he may be a cut below the favorite, but the Dean Pedersen-trainee proved he can compete and belongs here. Tiago Pereira rides.

Jockey Flavien Prat rode four winners of this race in a row from 2015 to 2018 and seeks to tie the leading rider mark aboard Collusion Illusion, who is one race short of a perfect record in five starts.The son of Twirling Candy, trained by Mark Glatt, has won both career starts at this distance and is coming off a nice win in the Laz Barrera Stakes (G3) in June.

Heartwood ships in from an allowance win at Belterra Park and the well-traveled Jim Chapman trainee (he raced in Korea last September) is a six-furlong specialist with a record of 16-7-2-0. He has the highest figure for any runner who has tested the distance, but that was once and the competition isn’t easier here. Edwin Maldonado rides.

Longacres Mile (G3) winner Law Abidin Citizen has been an effective runner at longer sprints and at the one-mile distance and has a graded win on the turf as well. He’s coming off an allowance win in gate-to-wire fashion at Santa Anita in June, but he’s also won from off the pace, so some versatility will help him in this race loaded with speed. Abel Cedillo is back aboard.

Desert Law was a solid second in this race a year ago with a 102 speed figure. Sidelined until June, he returned with a third in allowance company at Santa Anita. He has been no worse than third in eight of 10 starts at the distance, and has the services jockey Victor Espinoza.

Wildman Jack won the grassy Daytona Stakes (G3) back in May after winning a Group 3 on the Meydan turf in the winter. Anyportinastorm is 6-0-2 from eight starts at the distance for trainer Blaine Wright, while Grade 3 winner Lexitonian makes the long trip from Kentucky for trainer Jack Sisterson off a win in a Churchill Downs allowance in June Drayden Van Dyke rides.