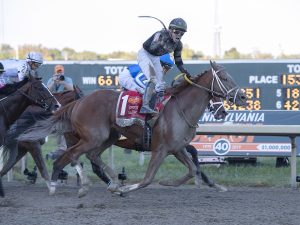 Math Wizard came sweeping around the final turn on the far outside and poured on the speed in the stretch to pull off a huge upset in the $1 million Pennsylvania Derby (G1) on Saturday at Parx Racing.

Dismissed in the wagering at 31-1 in a field of six 3-year-olds that included Preakness (G1) winner War of Will and slight favorite Improbable, Math Wizard paid huge dividends for his owners and trainer Saffie Joseph Jr., who claimed the colt for $25,000 in January.

That chance was worth a payout of $64.20 on a $2 win bet, and the group of owners collected the winner’s share of $600,000. Math Wizard had a late change in riders, with the nation’s top jockey, Irad Ortiz Jr., getting the late call.

The combination was a winner. Mr. Money, who had won four Grade 3 stakes in a row coming into the 1 1/8-mile Pennsylvania Derby, took the lead out of the gate after trainer Bob Baffert’s Improbable acted up just before the start and broke poorly.

War of Will, trying to regain his winning form after off-the-board finishes in the Belmont Stakes (G1) and the Jim Dandy (G1), rated just behind Mr. Money with Spun to Run in third. Math Wizard was last after a half mile and fifth after three-quarters. That’s when he took off and moved into contention six wide on the turn for home.

Ortiz urged him on and Math Wizard passed his rivals and caught Mr. Money jest before the wire and won by a neck, with War of Will another neck back in third. Improbable was fourth, followed by Spun to Run and Shanghai Superfly.

The race lost some of its luster earlier in the week when likely favorite Maximum Security was knocked out of contention following a bout of colic.

Math Wizard won for just the third time in13 career starts. After he won the claimer in January, the colt was 0-for-6 before Saturday’s stunning win.

“This is my home track. They asked us (to run), but we wanted to,’’ said Fanelli. “The reason we didn’t know was he was laying down in his stall and he wasn’t feeling himself and we were going to push him but we said, ‘the worst case scenario would be we don’t come and it cost us a couple thousand dollars.’ And, if he feels good in the next couple of days, we will bring him up, and that is exactly what happened. He just got better and better.” 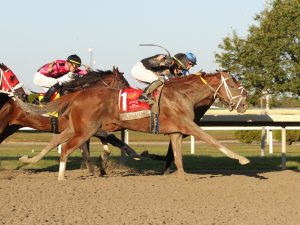 “He broke, put me in a good position. I saw the favorite (Improbable) didn’t break and I didn’t panic,’’ said Ortiz, adding that his plan was to stick with Improbable.

As the field rounded the final turn, Improbable moved inside and Math Wizard went outside.

“He was coming little by little but when he turned for home and he switched leads then he took off,’’ said Ortiz of Math Wizard. “He ran hard. When I turned for home and I opened the reins and he started taking off I said, ‘I’m going to get there.’ ”

In the co-feature $1 million Cotillion (G1) for 3-year-old fillies, Street Band ($17.40) also rallied wide in the stretch under Sophie Doyle and pulled away for a 2 ¾-length victory over previously unbeaten Guarana to earn an automatic berth in the Breeders’ Cup Distaff (G1) at Santa Anita on Nov. 2.